Heavy rainfall of up to 10 inches in northern and western Arkansas that fell during the Christmas weekend is still causing major flooding in some areas.

Currently more than 30 streamgages in Arkansas operated by the USGS experienced a “top 10” flood, meaning this flood event was one of the ten highest flood events ever recorded at these streamgages.

Heavy rainfall of up to 10 inches in northern and western Arkansas that fell during the Christmas weekend is still causing major flooding in some areas.

“Unfortunately, the Christmas floods are ones for the record books,” said Jonathan Gillip, a USGS hydrologist in Little Rock. “At some streamgages, particularly in the northwestern part of the state, we’ve seen water levels and data indicating this was one of the top one or two floods ever recorded by the USGS in that area,” Gillip continued.

Fifteen streamgages across the State are still above flood stage.  USGS crews have been taking field measurements since the night of Saturday, December 26th and will continue collecting flood data through the weekend.

USGS streamgages provide real-time information  to emergency managers, to the National Weather Service to assist with flood forecasting and to the U.S. Army Corps of Engineers where it is used for flood control.

The Arkansas River continues to experience unusual flooding as well. As of Wednesday, the 28th, data collected by the USGS indicates that water levels along the Arkansas River are approaching the historic 1990 flood levels.

“Our crews have been measuring the flow along the Arkansas and at several locations we’ve had trouble accessing the river to make measurements because it is so high,” commented Gillip. 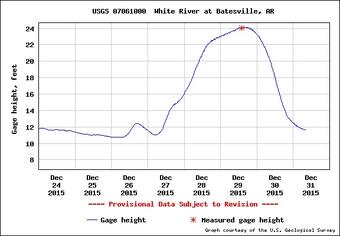 Teams of USGS hydrographers are traveling to streamflow-gaging stations to keep station instruments operating and to verify streamflow data needed for National Weather Service flood forecasts. USGS personnel have worked closely with federal, state, and local agencies during the flood to provide flood information for emergency managers, the media, and the public. River and stream levels at USGS streamflow gaging stations in Arkansas can be observed through the USGS Water Resources in Arkansas site.

The USGS operates a network of more than 7,500 streamgages nationwide, with over 170 located in Arkansas

USGS Water Science Centers are located in each state. They can provide more detailed information on stream conditions and on the USGS response to local events.