With California burning in the fall of 2018, the conversation came up yet once again.

How do we prevent monster fires with names like Camp and Woolsey from torching massive amounts of California landscape—or anywhere else, for that matter? Is it even possible to build fire resistance into the intersection of wildlands and rural developments?

And maybe most importantly, can we do anything to ensure 85 lives are never lost again, as they were in the flames that consumed the California community of Paradise in November 2018?

As the nation works through answers and solutions, the U.S. Geological Survey (USGS) and its Earth Resources Observation and Science (EROS) Center are right there to participate in the discussion.

In places like California, where booming growth in suburban and semi-rural areas adjacent to wildlands has pushed the population from 24 million in 1980 to 40 million today, EROS brings vital information to the conversation through its involvement in the LANDFIRE and Monitoring Trends in Burn Severity (MTBS) programs.

LANDFIRE is multi-agency, multi-partner wildland fire management program whose primary leadership comes out of the Department of Interior, the U.S. Department of Agriculture Forest Service, and the Nature Conservancy. It provides the entire nation with consistent, comprehensive vegetation and wildlands fuels data—valuable information to land managers trying to assess how fuel loads across their landscapes might influence the character of future fires.

The interagency MTBS project operates post-fire to map the burn severity and extent of large fires across all lands of the United States from 1984 to present—again, important input for those land managers as they study wildfire trends or try to decipher how previous burns may impact fuel loads in fire-prone areas.

EROS staff does the mapping for both programs using remotely-sensed Landsat data.

“We are absolutely part of the national discussion, especially in providing data to help inform that conversation,” says EROS Geographer and Senior Scientist Birgit Peterson. “In some of the research areas that we’re doing, whether that’s in burn severity or fuels mapping, we’ll feed that into the informing of and potentially the implementation of a national fire strategy.”

While it’s not uncommon for local land managers to map vegetation and fuel loads for their own units, no one else has the mandate to cover the nation that LANDFIRE does, Peterson said. The fire science staff at EROS initially leveraged remotely-sensed Landsat imagery at 30-meter resolution, plot-based observations from a variety of sources, and other ancillary data to create a base map of vegetation representing the 2001 era for the entire country. Those data layers were later updated to represent the 2008 era, then updated again every other year until EROS began working on remapping the entire country from scratch to represent the circa 2016 era.

Now when large wildfires break out, land managers can go to a national clearinghouse where LANDFIRE is the default dataset and find important fuel source information that helps in defining the potential character of those fires.

The MTBS post-fire information is important to the national conversation on several fronts. MTBS relies on Landsat data to map fires of 1,000 acres or more in the western United States, and 500 acres or greater in the east half of the country. Because that mapping goes all the way back to 1984, MTBS can offer insights into how patterns of fire severity are changing. Are blazes getting bigger? Are they occurring in areas where they haven’t before? The MTBS maps shed light on all those questions.

“There’s a lot of information that can be gleaned from those answers,” Peterson said.

Beyond what it provides in burn trends, MTBS also helps to inform the LANDFIRE maps when it comes to existing fuel loads. For example, low severity fires are a form of fuels treatment, Peterson said. If a low severity fire goes in and burns off a lot of downed woody debris in an area, then in theory, “there shouldn’t be a lot of fire fuel the next time an ignition occurs there because you cleaned up a lot of the extra fire load,” she said.

Having that information makes the LANDFIRE maps even more valuable to land managers when it comes to dealing with the next fire, both in terms of understanding how much fuel exists based on the severity of previous burns in the area, but also because they can show how remaining vegetation fuel is arranged on the landscape now, Peterson said.

It’s not just land managers who benefit. As overarching conversations about fire strategy are occurring at such places as the National Cohesive Wildland Fire Management Strategy workshops, USGS and EROS are on hand to engage representatives from science, data, even management on what their needs are, Peterson said.

“We try to encourage people to think about such things as, ‘What’s the next thing you want to see? Where are there data gaps right now? And what can we potentially provide to you, whether it’s improvements to existing datasets or something completely new?’ ” Peterson said. “Or maybe it was someone telling us, ‘Hey, don’t ever change this because this is exactly what I need now.’ So, all of that was the kind of feedback we were soliciting.”

Knowing and acting on that feedback helps to ensure EROS’ value in providing the kinds and volumes of data people need to find answers, Peterson said. Even beyond that, she believes EROS scientists and technicians have important knowledge gleaned from their work with LANDFIRE and MTBS that could be tapped for the national discussion as well.

“I think where we can really bring something to bear is at that national scope, where we can look at how things are changing from region to region, and help explain why,” Peterson said.

At the same time, as EROS continues to develop and perfect its new Land Change Monitoring, Assessment, and Projection (LCMAP) initiative—producing reliable and independently-validated maps and statistics that explain even better how U.S. land cover is changing over time, and in near real time—Peterson said the door for USGS’ and EROS’ place within the national fire strategy discussion should swing open even further.

Other USGS innovations are pushing that door open as well.  Researchers at the USGS Geosciences and Environmental Change Science Center in Denver using Landsat Analysis Ready Data (ARD) have developed a Burned Area Product that provides new and unique information about spatial and temporal patterns of fire occurrence that many existing fire databases may have missed.

Indeed, there are many areas of expertise that can contribute to a national fire strategy, she continued. And many different viewpoints that extend even beyond the fire scientists. They should all be at the table, Peterson said.

Sitting right there, she added, with USGS and EROS beside them. 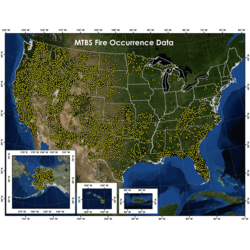 Monitoring Trends in Burn Severity (MTBS) is an interagency program whose goal is to consistently map the burn severity and extent of large fires across all lands of the United States from 1984 to present. This includes all fires 1,000 acres or greater in the western United States and 500 acres or greater in the eastern Unites States. The extent of coverage includes the continental U.S., Alaska...
By
Earth Resources Observation and Science Center, Earth Resources Observation and Science (EROS) Center
link
September 7, 2018

Monitoring Trends in Burn Severity (MTBS) is an interagency program whose goal is to consistently map the burn severity and extent of large fires across all lands of the United States from 1984 to present. This includes all fires 1,000 acres or greater in the western United States and 500 acres or greater in the eastern Unites States. The extent of coverage includes the continental U.S., Alaska...
Learn More 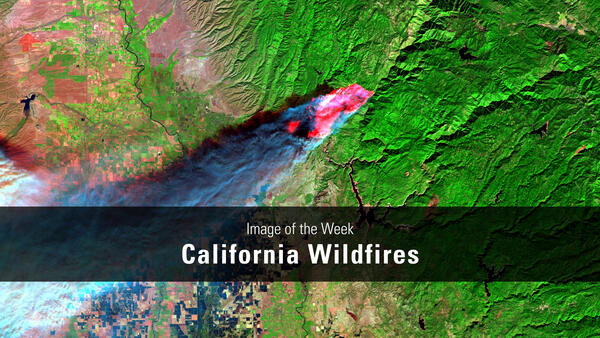 For all the great Federal records and remotely sensed products out there that have documented fires across the United States through the decades, it...

It began with a tree falling onto a power line.

There were sparks, then very quickly a wilderness ablaze. In its first 13 hours, the Las Conchas Fire...