Learn about water use through pictures

Water-Use Data for the Nation

As the label in the grocery store says, "Farm Raised Tilapia Fillets" are for sale! Yes, aquaculture and fish farming are big businesses nowadays, and with the rising population of the world, more and more seafood will be grown in the future in aquatic farms.

Fish farming is only one aspect of aquaculture. Aquaculture water use is water associated with raising creatures that live in water—such as finfish and shellfish—for food, restoration, conservation, or sport. In many rivers, lakes, and reservoirs around the country, recreational fishermen enjoy catching fish that have been raised in fish ponds and released to natural waters. Aquaculture production occurs under controlled feeding, sanitation, and harvesting procedures primarily in ponds, flowthrough raceways, and, to a lesser extent, cages, net pens, and closed-recirculation tanks.

As the demand for seafood has increased, technology has made it possible to grow food in coastal marine waters and the open ocean. Aquaculture is a method used to produce food and other commercial products, restore habitat and replenish wild stocks, and rebuild populations of threatened and endangered species.

There are two main types of aquaculture—marine and freshwater.

In the United States, marine aquaculture produces numerous species including oysters, clams, mussels, shrimp, seaweeds, and fish such as salmon, black sea bass, sablefish, yellowtail, and pompano. Marine fish farming is typically done in net pens in the water or in tanks on land.

Aquaculture water use in the United States

Every five years, water withdrawal and use data at the county level are compiled into a national water-use data system, and state-level data are published in a national circular.

Access the most recent aquaculture data, maps, and diagrams.

Below are multimedia items associated with aquaculture and water use. 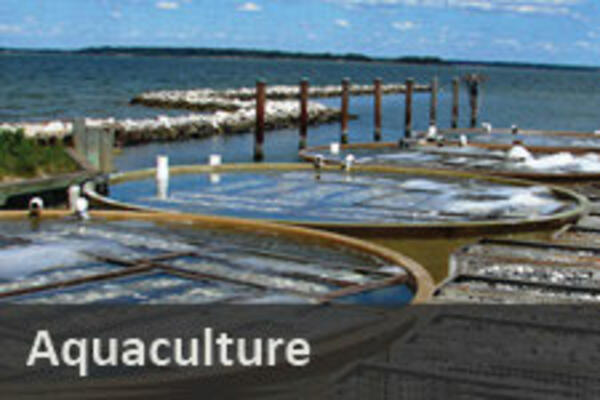 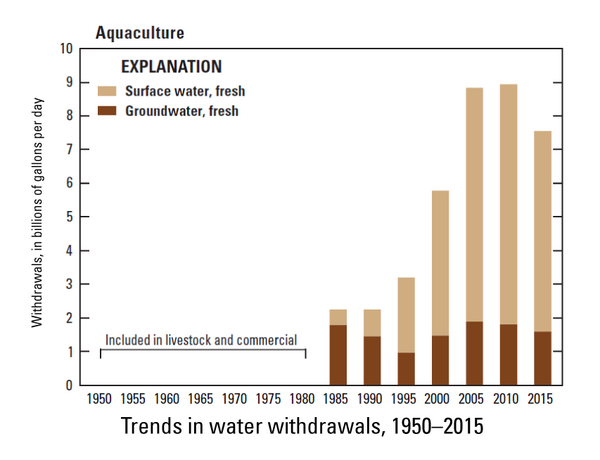