Base Flow in Rivers Completed

Base Flow in Rivers

Learn about groundwater through pictures

When a drought hits and little or no rain has fallen in a long time, you might expect small streams and even larger rivers to just dry up, right? In many cases, they don't. Streamflow might lessen to a trickle or so, but water continues to flow. How is that possible? Read on to find out how "base flow", which is water seeping into the stream from groundwater, helps keep water in streams during droughts.

Base-Flow in Streams: Why Some Streams Don't Just Dry Up

You have to admit that this is a pretty stunning picture, right? You are looking at my neighbor's driveway with some water on it. But, the stunning part is, and brace yourself, it had not rained in over a day, so where is the water coming from? What you're seeing here is visual evidence of something in the hydrologic system that is vitally important to most life on Earth. This picture shows an example of groundwater seepage; it is groundwater seepage which keeps water flowing in streams and rivers even during extended periods of severe drought. You have to "look below the surface" (pun intended) of what you see here. The water on the driveway is not runoff from the surface, but is seepage out of the ground after a downpour the day before. In this case, the water is just acting naturally, according to the laws of gravity—it is moving downhill ("down gradient") towards a creek at the bottom of the hill to the right side in the picture.

During the rainstorm water soaked into the ground (infiltration) in the hill above the driveway. As happens with water below ground, it started moving through underground layers of soil and rock that are porous enough to allow water to move through it. After a storm, water doesn't move straight down into the ground, but, rather, it moves both downward and horizontally along permeable layers, which can be seen, in a microscopic kind of way, when a roadway is cut into a hillside.

Normally, the water would just flow underground to the bottom of the hill and seep out of the stream banks into the creek. But here the driveway was dug deep enough into the ground so that it cut into the permeable layer of soil that carries the undergroundwater downhill. Thus, you can see groundwater seepage coming to the surface. Notice it took over a day for the water to move about 100 yards, which is explained by the composition of the underground rock structures in the hill.

Atlanta, Georgia, USA was in the midst of a severe drought in 2008, and, as the left side chart below shows, virtually no rain fell during September. At the Peachtree Creek site near downtown, only 1/10th of an inch of rain fell, on about Sept. 8th. Certainly the water flowing in Peachtree Creek comes from rainfall, but if it depended on only rainfall runoff for its water supply, the creek would have been dry as a bone the whole month. Next, look at the right-side chart below; it shows the gage height (river stage) of Peachtree Creek for the same time period. Gage height is a somewhat arbitrary datum height, in feet, above an altitude designated as zero. The zero point is set to be below the base-flow height of the river. For Peachtree Creek, the level of the water during periods of no rainfall (its base flow) is about 2 feet.

The gage height on August 30th, after the creek has fallen back down to base-flow conditions after a storm was 2 feet. Proceed along September in the stage chart below and even after a month of no rain, the stage at the beginning of October was about 1.9 feet - barely a drop at all. Most people probably think that the water flowing in rivers comes from rainfall running off the landscape, and it does, of course, but as these charts show, a river is really "kept alive" not so much by rainfall runoff but by the seepage of rainwater that has infiltrated the ground and slowly flowed through underground rocks and aquifers, downgradient, and then into the stream bed. Of course, if it didn't rain for a year, we'd expect the creek to truly dry up completely, but by looking at these charts we can see that ground seepage contributes about 2 feet of water (by stage) to Peachtree Creek—the base-flow amount.

Every stream, and the land around it and below it, is different

When you think about floods, you obviously think about how all the water that fell out of the sky runs overland as surface runoff and overwhelms the river. During the immediate flooding, inflow from groundwater has much less to do with it. But the opposite occurs in periods of low flow and drought, when the water you see flowing in rivers likely does not come from runoff, but from the seepage of underground water into the stream bed. There are a lot of variables about the hydrogeologic makeup of the area around a river that determines is base-flow characteristics. That is why I said that every stream is different when it comes to base flow. The situation of a month on no rainfall at Peachtree Creek and how the river stage stayed level would not apply to thousands of other rivers and streams around the United States and the world.

Above the land surface, rainfall pattens vary widely, which affect the amount and timing of water available for infiltration into the ground. On the land surface, things like the slope of the land surface, the amount of vegetation, and even the amount of development by humans, impervious surfaces affect the extent and timing of runoff. Of greater consequence, though, are the characteristics of the rock and material below the land surface. The ability of water to infiltrate into the ground and move through the ground is dependent on the type of rock (sandy, porous, hard and crystalline, fractured). The porosity and permeability of the rocks is important in groundwater movement, along with the way the rocks are layered (the presence of confined and unconfined aquifer layers). Of course, the water moves through the ground due to gravity, so water will move faster in areas that have higher topographical relief. Whole careers are built on studying groundwater and groundwater availability and movement, so suffice it to say that many things underground determine how much water reaches a stream bed to supply the river with base-flow water.

Below are other science topics associated with base flow. 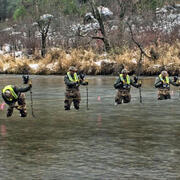 How Streamflow is Measured

How Streamflow is Measured 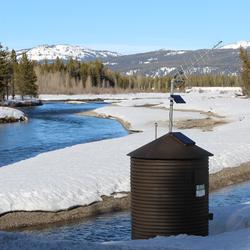 How Does the USGS Collect Streamflow Data?

How Does the USGS Collect Streamflow Data?

The U.S. Geological Survey (USGS) has been measuring the amount of water flowing in rivers since the 19th century. Having reliable past and present streamflow information is vital for many reasons, both at the personal and national level.
link
June 8, 2018

The U.S. Geological Survey (USGS) has been measuring the amount of water flowing in rivers since the 19th century. Having reliable past and present streamflow information is vital for many reasons, both at the personal and national level.
Learn More

Below are multimedia items associated with base flow. 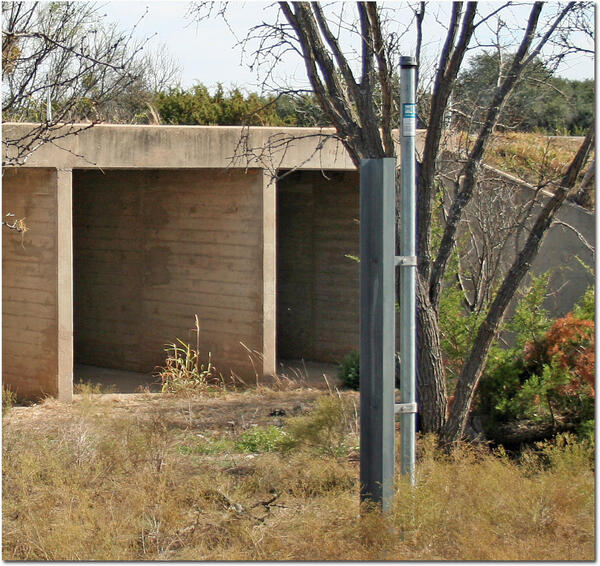