This page offers some questions and answers about the hydrology of floods. This information is from the U.S. Geological Survey's MD-DE-DC Water Science Center website of frequently-asked questions about water. 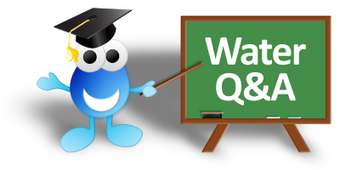 Flooding occurs in known floodplains when prolonged rainfall over several days, intense rainfall over a short period of time, or a debris jam causes a river or stream to overflow and flood the surrounding area. Severe thunderstorms can bring heavy rain in the spring and summer; or tropical cyclones can bring intense rainfall to the coastal and inland states in the summer and fall.

As land is converted from fields or woodlands to roads and parking lots, it loses its ability to absorb rainfall. Urbanization increases the amount of impervious areas, causing runoff to be two to six times over what would occur on natural terrain. During periods of urban flooding, streets can become swift moving rivers and can be dangerous for drivers. Because of the buoyancy effects and power of moving water, even a foot of moving water can be enough to carry away some cars.

Several factors contribute to flooding. Two key elements are rainfall intensity and duration. Intensity is the rate of rainfall, and duration is how long the rain lasts. Topography, soil conditions, and ground cover also play important roles. Most flash flooding is caused by slow-moving thunderstorms, thunderstorms repeatedly moving over the same area, or heavy rains from hurricanes and tropical storms. Floods, on the other hand, can be slow- or fast-rising, but generally develop over a period of hours or days.

Even though you may never have heard of "recurrence interval", it may be familiar to you. When a major flood occurs, you might have heard that the stream stage reached the "100-year flood level". This means that a flood of that magnitude has a 1 in 100 chance of occuring in any year.

Recurrence intervals for the annual peak streamflow at a given location change if there are significant changes in the flow patterns at that location, possibly caused by an impoundment or diversion of flow. The effects of development (conversion of land from forested or agricultural uses to commercial, residential, or industrial uses) on peak flows is generally much greater for low-recurrence interval floods than for high-recurrence interval floods, such as 25-, 50-, or 100-year floods. During these larger floods, the soil is saturated and does not have the capacity to absorb additional rainfall. Under these conditions, essentially all of the rain that falls, whether on paved surfaces or on saturated soil, runs off and becomes streamflow.

When rainfall data are collected at a point within a stream basin, it is highly unlikely that this same amount of rainfall occurred uniformly throughout the entire basin, especially during Atlanta's summer thunderstorm season, for example. Some parts of the basin may even remain dry, supplying no additional runoff to the streamflow and lessening the impact of the storm. Consequently, only part of the basin may experience a 100-year rainfall event.

Existing conditions prior to the storm can influence the amount of stormwater runoff into the stream system. Dry soil allows greater infiltration of rainfall and reduces the amount of runoff entering the stream. Conversely, soil that is already wet from previous rains has a lower capacity for infiltration, allowing more runoff to enter the stream.

Another factor to consider is the relation between the duration of the storm and the size of the stream basin in which the storm occurs. For example, a 100-year storm of 30-minutes duration in a 1-square-mile (mi2) basin will have a more significant effect on streamflow than the same storm in a 50-mi2 basin. Generally, streams with larger drainage areas require storms of longer duration for a significant increase in streamflow to occur. These and other factors determine whether or not a 100-year storm will produce a 100-year flood.

Can two "100-year floods" occur within several years or even within the same year?

This question points out the importance of proper terminology. The term "100-year flood" is used in an attempt to simplify the definition of a flood that statistically has a 1-percent chance of occurring in any given year. Likewise, the term "100-year storm" is used to define a rainfall event that statistically has this same 1-percent chance of occurring. In other words, over the course of 1 million years, these events would be expected to occur 10,000 times. These events, as well as any recurring events, are assumed to be statistically independent of each other.

Therefore, each year begins with the same 1-percent chance that a 100-year event will occur.

How can the same streamflow be a 100-year flood in one location and only a 50-year flood at another?

Recurrence intervals are based on the probability of the peak streamflow occurring at a given location in any year. As water flows downstream from point "A" to point "B" and the drainage area (of the watershed) increases, the volume of streamflow increases. Given this, it may seem reasonable to think that peak flows would increase in the same manner, but this is not necessarily true. The flow at any particular point on a stream depends on local stream channel and floodplains conditions as well as on conditions upstream or downstream of the point, such as channel slope, floodplain shape, and any impoundments of streamflow.

Downstream points on a stream will have greater total volume of streamflow resulting from flooding (except in certain very unique situations), but the rate of streamflow can be quite different from upstream points, and will often be less. In these cases, streamflow will remain elevated for a longer period of time. This phenomenon, known as peak attenuation, can be attributed to several variables. A narrow, efficient stream channel will allow the water to pass quickly, resulting in a nearly instantaneous increase in peak flow. At locations where the stream channel widens or may contain heavy vegetation, the water velocity may decrease. Also, as the peak flow moves downstream, water may move into the floodplain where it is stored until the water level begins to recede. As the water level recedes, the stored water in the floodplain will slowly re-enter the stream. These combined factors explain why the peak flow may be less in magnitude but longer in duration as the flood progresses downstream.

How is peak flow determined?

Streamflow is more difficult to measure accurately and continuously than is stage. Streamflow for a gaging station is typically determined from an established stage-streamflow relation, or rating curve. Individual streamflow measurements are made by USGS personnel at a gaging station by using standard procedures (Rantz and others, 1982); ideally, these measurements are made when the stage is not changing. A series of these measurements made over a range of flow conditions defines the rating curve, which is used to convert continuous measurements of stage to a continuous record of streamflow. Channel changes, resulting from scour, deposition, vegetation, or other processes, alter the stage-streamflow relation, so that streamflow measurements must be made routinely and continuously to ensure that the rating curve remains accurate.

Estimates of peak flows, which are outside the range of the established rating curve, may be made by an extrapolation of the rating curve to the peak stage. At some gaging stations, indirect methods of streamflow determination based on high-water marks, channel properties, and hydraulic principles may be used to obtain an independent estimate of discharge. These indirect methods generally require accurate field surveys to determine high-water marks, channel properties, and channel shape. The information obtained in the field is then processed using computer programs to determine the streamflow. Continued evaluation of these streamflow computations may result in some revision of previously determined peak flows.