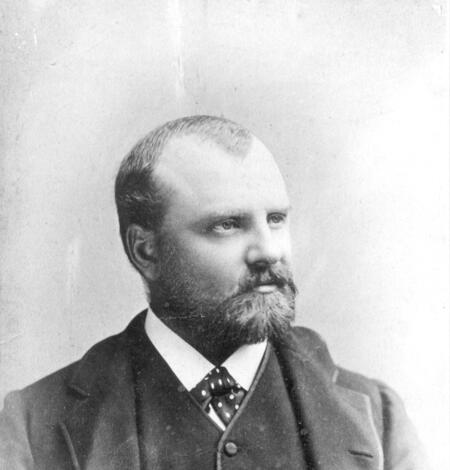 On March 20, 1879, President Hayes sent to the Senate the nomination of Clarence King to be the first Director of the U.S. Geological Survey. The Senate confirmed the nomination on April 3, and King took the oath of office on May 24.

The Fortieth Parallel Exploration under King's direction had led the way in converting western exploration to an exact science. His new position gave him a unique opportunity to influence the development of Federal geology.

The first duty enjoined on the Geological Survey was the "classification of the public lands."10 In the year that the Geological Survey was established, the Federal Government still held title to more than 1.2 billion acres of land, nearly all of it west of the Mississippi River, of which only 200 million had been surveyed. The edge of settlement was at about 102° West; beyond the frontier were only isolated pockets or belts of settlement, and in vast areas beyond the frontier, the population was officially less than 1 per square mile.

Nearly all the public lands were within the arid region as defined by John Wesley Powell in his 1878 "Report on the Lands of the Arid Region of the United States." Water was the region's most precious resource, but Powell had pointed out that very little of the remaining public land was suitable for conventional farming and that only a small fraction of the arid land was irrigable. He then proposed radical changes in the land system, including organization of irrigation and pasturage districts, which suggested that water was more of a sociopolitical than a scientific problem.

Many of the isolated small pockets or belts west of the frontier owed their initial and some their continued existence to miners or prospectors, but the larger and more profitable mining industry was in the States east of the 100th meridian--Pennsylvania was the leading mining State in the Nation. Just eight commodities--gold, silver, iron, coal, copper, lead, zinc, and petroleum--accounted for nearly 99 percent of the value of the mineral production in the United States; the greater part of the precious metals and lead came from the area west of the 100th meridian, but the rest came from the States east of that line.

The very brief enabling legislation did not define in detail the duties of the new organization, thus leaving much to the Director's judgment. King concluded that the Geological Survey's classification of the public lands, especially as Congress had made no change in the General Land Office, was not meant to supersede the classification made by the Land Office as a basis for granting title, and the Public Lands Commission agreed. To meet the requirement for classification, King therefore planned a series of land maps to provide information for agriculturists, miners, engineers, timbermen, and political economists.

The duty of examining the geologic structure, mineral resources, and products of the national domain offered many possibilities. The year in which the Survey was established, however, was one of great monetary uncertainty, when knowledge of precious-metal resources was vital, and one in which the iron and steel industry faced problems in obtaining suitable raw materials, while information about the Nation's mineral wealth, mining and metallurgical techniques, and production statistics was meager. For the Survey's initial program of work, therefore, King chose to emphasize mining geology, to devote but a small effort to general geology, and to confine paleontology and topographic mapping to what was necessary to support the geologic studies. Although King in so doing emphasized practical studies at the expense of basic studies, he nonetheless expected that the facts gathered in the mining-geology studies would lead to advances in basic science.

The term "national domain" in the organic act provided a problem. The framers of the law had used the term to mean all lands within the national boundaries without having to name all the States and Territories, but an Interior Department attorney ruled that it meant the lands to which the Government had not parted title, that is, the public lands. The literal interpretation of that ruling would preclude work in a mining district where most of the land had become private property. King asked Congress to clarify the meaning, and the House promptly extended the field of the Geological Survey to the entire Nation but Congress adjourned before the Senate acted. For the first year, therefore, King decided to confine operations to the public-land regions though not to the public lands.