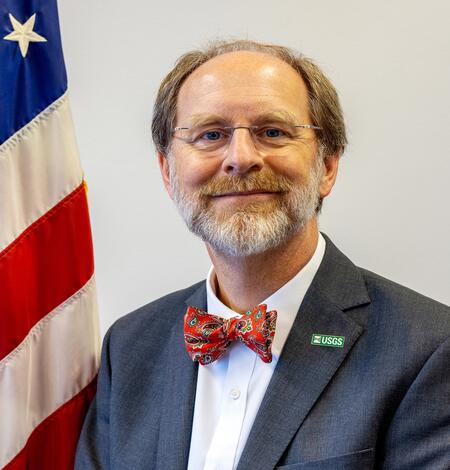 As Director, Dave Applegate oversees the scientific and operational programs of the bureau.

David Applegate is the 18th Director of the U.S. Geological Survey, sworn in by Secretary of the Interior Deb Haaland on Aug. 15, 2022. Prior to assuming his official role, he exercised the delegated authority of the USGS Director beginning on Jan. 20, 2021. He served as the Associate Director for Natural Hazards since 2011, leading USGS emergency response activities and overseeing the bureau’s geologic hazards and coastal and marine programs. He co-chairs the interagency Science for Disaster Reduction working group and chairs the interagency Civil Applications Committee.

Applegate joined the USGS in 2004 as the first Senior Science Advisor for Earthquake and Geologic Hazards. Prior to that, he spent eight years with the American Geosciences Institute (AGI) federation of geoscience societies, where he directed science policy and served as the editor of Geotimes, AGI’s news magazine for the earth sciences. Applegate has also served with the U.S. Senate Committee on Energy and Natural Resources as the American Geophysical Union's Congressional Science Fellow and as a professional staff member. He has taught at Johns Hopkins University and served as an adjunct professor at the University of Utah.

Born and raised in Chambersburg, Pa., Applegate has a B.S. in geology from Yale University and a Ph.D., also in geology, from the Massachusetts Institute of Technology. He lives in Washington, D.C., with his wife Heidi and two daughters.

A little more than 50 years ago, on 27 March 1964, the Great Alaska earthquake and tsunami struck. At moment magnitude 9.2, this earthquake is notable as the largest in U.S. written history and as the second-largest ever recorded by instruments worldwide. But what resonates today are its impacts on the understanding of plate tectonics, tsunami generation, and earthquake history as well as on the d
By
Groundwater and Streamflow Information Program, Alaska Science Center
January 1, 2009

Challenges to building a disaster-resilient nation