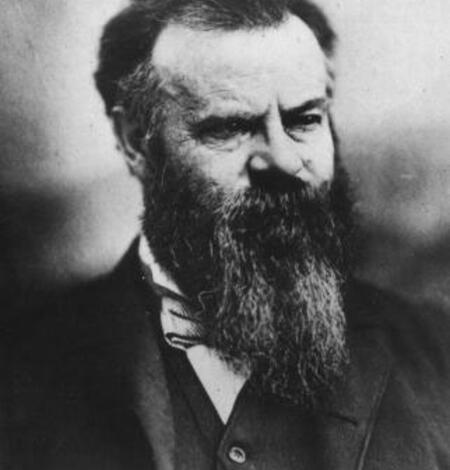 John Wesley Powell, the second Director (1881-1894) of the U.S. Geological Survey, is highly regarded in several fields: as an explorer, geologist, geographer, and ethnologist. The Survey’s proud tradition of mapping the nation was largely established under Powell’s leadership.

Powell was born in 1834 at Mount Morris in New York. He sporadically attended Wheaton and Oberlin Colleges but never earned a degree. Interested in botany and geology at an early age, he began his scientific investigations with a series of self-directed field trips, including a rowboat voyage that covered the length of the Mississippi River. In 1861, Powell enlisted in the Union Army and was commissioned as captain. He lost his right arm at the elbow in the Battle of Shiloh but returned to active duty and was promoted to the rank of major.

In the spring of 1869, the one-armed Civil War veteran led an expedition down the Colorado River into a great, unknown, uncharted territory. Ninety-nine days later, after one of the most daring journeys in American history, John Wesley Powell emerged from the Grand Canyon to become a contemporary American hero.

In the following years Powell led several geological and ethnological explorations in Arizona and Utah under the auspices of the Smithsonian Institution. His reports of the West contained much insightful information about Native Americans. In 1877 he published a pioneering work on Indian languages that led to his appointment in 1879 as the first Director of the U.S. Bureau of Ethnology of the Smithsonian Institution, a post held simultaneously while serving as the USGS director.

Powell could be viewed as an early climate scientist since his extensive experience and observations in the West led to his belief that lands west of the 100th meridian were not generally suitable for agricultural development. His Report on the Lands of the Arid Regions of the United States (1878) even proposed that state boundaries to be drawn from the Western territories should be based on watershed areas.

Powell’s efforts toward reorganizing early surveys in the West helped establish the USGS in 1879. In March 1881, Powell became Director of the USGS when the first Director, Clarence King, resigned and suggested Powell as his successor. Powell backed a nationwide program of topographic mapping, promoted systematic studies and data collection in hydrography, and advocated conservation and careful planning in the use of Western lands.

Powell’s championing of one geodetic system and one topographic system marked the continuing importance of what is still today a core function of Federal mapping — the development of consistent national mapping standards. In a bold statement to Congress in 1884, Powell announced, “A Government cannot do any scientific work of more value to the people at large than by causing the construction of proper topographic maps of the country.”

Powell’s cautionary views regarding settlement in the West eventually antagonized influential Western politicians, and he resigned from the Survey in 1894. Powell continued to direct the Smithsonian’s Bureau of Ethnology until his death in 1902.