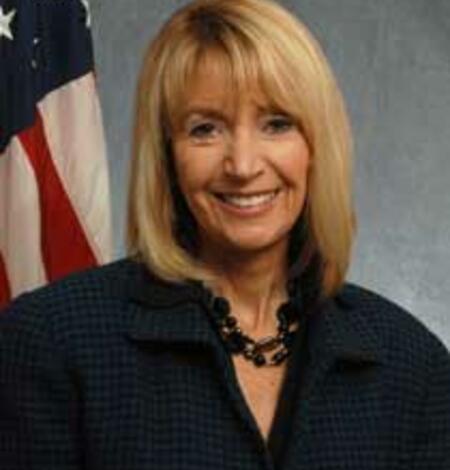 Director Marcia K. McNutt, is a distinguished scientist and administrator and the first woman director of the USGS in its 130-year history. Dr. McNutt previously served as president and chief executive officer of the Monterey Bay Aquarium Research Institute (MBARI), in Moss Landing, California.

As a scientist, Dr. McNutt has participated in 15 major oceanographic expeditions and served as chief scientist on more than half of those voyages. She has published 90 peer-reviewed scientific articles. Her research has ranged from studies of ocean island volcanism in French Polynesia to continental break-up in the Western United States to uplift of the Tibet Plateau.

Dr. McNutt joined the faculty at MIT in 1982 where she became the Griswold Professor of Geophysics and served as Director of the Joint Program in Oceanography & Applied Ocean Science & Engineering, offered by MIT & the Woods Hole Oceanographic Institution.

She served as President of the American Geophysical Union from 2000-2002. She was Chair of the Board of Governors for Joint Oceanographic Institutions, helping to bring about its merger with the Consortium for Ocean Research and Education to become the Consortium for Ocean Leadership, for which she served as Trustee. She is a fellow of the American Geophysical Union, the Geological Society of America, the American Association for the Advancement of Science, and the International Association of Geodesy.

McNutt’s honors and awards include membership in the National Academy of Sciences, the American Philosophical Society, and the American Academy of Arts and Sciences. She also holds honorary doctoral degrees from the University of Minnesota and from Colorado College. She was awarded by the American Geophysical Union the Macelwane Medal in 1988 for research accomplishments by a young scientist and the Maurice Ewing Medal in 2007 for her significant contributions to deep-sea exploration. She has served on numerous evaluation and advisory boards for institutions such as the Monterey Bay Aquarium, Stanford University, Harvard University, Science Magazine, and Schlumberger.

McNutt is a native of Minneapolis, MN, where she graduated class valedictorian from Northrop Collegiate School in 1970.