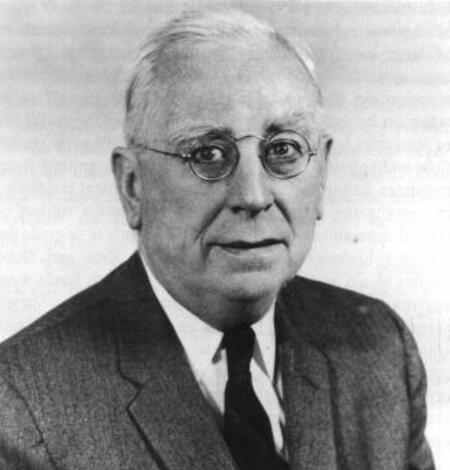 In January 1956, after Director Wrather retired because of illness and age, Assistant Director Thomas B. Nolan became the Survey's seventh Director. During his 11 years as Assistant Director, Nolan had many times and for extended periods served as Acting Director so no transition period was needed.

Nolan believed that geologists, because of the unique requirements imposed on them by their science, should expand their fields of interest from individual problems and "participate actively and authoritatively in the matters affecting the whole country."34 Until September 1965, when he resumed his research in Great Basin geology, Nolan pushed, prodded, and led the Survey to a broadened and intensified commitment to basic research, to the advancement of geology in the public service, and to the prompt publication of Survey results. As Assistant Director, he had also served as the Interior Department representative on the Interdepartmental Committee on Scientific Research and Development, on the Scientific Advisory Committee on Specialized Personnel to the Selective Service Committee, and on the Advisory Board on Education of the National Academy of Sciences, and had been president of the Society of Economic Geologists. As Director, his professional responsibilities outside the Survey were still further extended to service as vice president and president of the Geological Society of America, as vice president of the International Union of Geological Sciences, and on committees advisory to university geology departments.

Science and technology by this time were helping the Nation to meet many of its increasing demands for raw materials through improved methods of exploration, the ability to exploit lower-grade sources, and the substitution of common for less common materials, but new dimensions were added to the problem. Overspecialized exploitation of mineral resources in some areas caused economic problems; competition for resources, where development of one precluded use of others, created resource-management problems; the increasing industrial development and urbanization were creating wastes that caused health hazards and heightened vulnerability to damage by natural geologic processes. The Geological Survey in turn added new dimensions to its own investigations. In 1956, the Geological Survey began an evaluation of the effects of underground nuclear explosions at the Atomic Energy Commission's Nevada Test Site; that program was expanded to study the geologic and hydrologic conditions affecting the peaceful uses of atomic energy and the disposal of radioactive wastes. Geochemical exploration techniques, developed to aid the search for mineral resources, were adapted to investigate subtle differences in the natural distribution of chemical elements that might have a bearing on public health. Studies of geologic processes led to measures to protect the public from natural disasters; for example, research at the Hawaiian Volcano Observatory not only provided new understanding of the formation of ore deposits but also aided in the prediction of volcanic eruptions.

On October 4, 1957, Soviet scientists, investigating upper atmosphere conditions as part of the International Geophysical Year program, launched a rocket-powered artificial satellite "Sputnik" into orbit, astonishing the world and ushering in a new era in the sciences. The United States joined the race to explore space by putting Explorer I into orbit on January 31, 1958, and Vanguard I on March 17, 1958. In December 1958, Director Nolan, speaking at the meeting of the American Association for the Advancement of Science, remarked that the early work of the Geological Survey had been characterized by a transition from exploration of a geographical to an intellectual frontier, but demands by younger scientists for studies of the geography of outer space might soon inaugurate a new cycle in the history of the Geological Survey. In 1959, the Survey compiled a photogeologic map of the Earth's satellite, the Moon, and began studies of tektites and impact craters. On May 25, 1961, President John F. Kennedy proposed as a goal "landing a man on the moon and returning him safely to earth"35 before the end of the decade, and in 1963, the Geological Survey, in cooperation with the National Aeronautics and Space Administration, began to train astronauts in geology and to investigate and evaluate methods and equipment for geological and geophysical exploration of the Moon.

Congress had by that time already expanded the Survey's Earth-bound investigations, to Antarctica and the Trust Territory of the Pacific Islands in 1958, and to "outside the national domain"36 in 1962. In 1962, the Geological Survey began a program of marine studies to identify and evaluate potential mineral resources on or beneath the sea floor and to aid in solving the problems caused by rapid population growth, urbanization, and industrial expansion in coastal areas. Both the Geologic and Water Resources Divisions modified their internal organizations to deal more effectively with multidisciplinary investigations and research.

Under the Kennedy-Johnson administration in the early 1960's, appropriations were increased significantly, and total funds available for the fiscal year beginning July 1, 1964, for the first time exceeded $100 million, more than double the amount available just a decade earlier. In 1964, the Geological Survey again prepared a long-range plan for its future. Research functions were obviously not susceptible to a definite schedule, but some phases of the work, such as the topographic mapping of the Nation, were planned for orderly progression toward completion. Standard 7.5- and 15-minute quadrangle maps had been published for approximately 60 percent of the total area of the United States, and advance prints were available for another 9 percent. The long-range plan called for completing the topographic maps of the United States and outlying areas in either 7.5- or 15-minute series by fiscal year 1976 and the 7.5-minute series for all areas of the United States except Alaska by fiscal year 1981. Research would be continued in mapping systems and cartography, and the applications of electronic measuring systems and data-processing systems investigated. An increase of approximately 50 percent in the collection of basic water data was planned for the decade 1964-1973, as well as the development and testing of digital recording equipment and processing of water data by automation by 1968. Generalized or detailed ground-water information would be available for 75 percent of the country and reconnaissance information for the remainder by the end of 1974. Research would be increased to approximately 25 percent of the water-resources program. Research in economic geology, engineering geology, regional geology, and experimental geology would be doubled to meet the accelerating needs for resources and to provide the basic geologic data for urban expansion, engineering construction, and other purposes. The marine program would map and evaluate the composition, structure, and resources of the ocean floor and study geologic and hydrologic processes that operate within the oceans to understand better the conditions under which ancient sediments and ore deposits were formed. For the attainment of these goals, the Geological Survey recognized that the cooperative relations with States and other Federal agencies which it had long enjoyed were essential.

In 1964, however, new responsibilities were thrust upon the Geological Survey. One of the greatest earthquakes of all time struck south-central Alaska on March 27. Within a few hours, the Survey began a scientific and engineering study that extended through several field seasons and provided a very thorough documentation of a natural disaster. Survey geologists were also assigned to the Task Force of the Federal Reconstruction and Development Planning Commission and helped select sites for rebuilding the devastated area. In October 1965, following public release of a report by an Ad Hoc Panel of the President's Office of Science and Technology, the National Center for Earthquake Research was established in Menlo Park, California, to provide a focus for research on the causes, mechanics, and effects of earthquakes and on the development of methods for predicting the time, location, and destructive effects of earthquakes to reduce the loss of life and property.

On August 28, 1964, the Bureau of the Budget gave the Department of the Interior responsibility, which the Department then delegated to the Geological Survey, for the design and operation of the national network for collection of water data so that water information needed for effective development and management of water resources would be collected in a timely, effective, and economical fashion, and would be readily accessible at a single focal point. The Geological Survey in turn established an Office of Water Data Coordination. The new organization of the Water Resources Division made it possible for the Division to deal more effectively with multidisciplinary hydrologic studies and research needed for better water-resources and environmental management. The Division had also instituted intensive programs in hydrologic training and aided in establishing curricula in hydrology in leading universities.

On September 3, 1964, Congress passed the Wilderness Act, by which 9.1 million acres of national forest lands were made part of the National Wilderness Preservation System to be safeguarded permanently against commercial use and construction of permanent roads and buildings. New mining claims and mineral leases would be allowed only until December 31, 1983. The Geological Survey and the Bureau of Mines were authorized to assess the mineral resources of each area proposed or established as wilderness if no prior mineral survey had been made, and a new program of geologic mapping and mineral-resource assessment was begun.

In June 1964, President Lyndon Johnson, in proclaiming U.S. participation in the International Cooperation Year, said "I propose to dedicate this year to finding new techniques for making man's knowledge serve man's welfare. Let this be the year of science."37 In January 1965, he proposed a vast program to build a "Great Society," which he assumed could be financed without additional taxation. Among the measures passed by Congress in 1965 were such conservation measures as the Water Quality, Highway Beautification, Clean Air, and Solid Waste Disposal Acts. In the spring of 1965, however, the United States began to increase its commitment to support the anti-Communist regime in Vietnam, begun in the Eisenhower administration, and in his budget message in January 1966, President Johnson acknowledged that the appropriation of funds for increased commitments in Vietnam would hinder domestic programs.