The sudden reawakening of Mount St. Helens in late September 2004 was surprising because the preceding four years had seen the fewest earthquakes since the 1980-86 eruption ended.

In the early hours of 23 September 2004, a swarm of small-magnitude (< 1), shallow earthquakes (< 1 km or about 0.5 mi below the surface) began beneath the 1980-1986 lava dome. Over the next seven days, earthquakefrequency and size increased and a growing welt formed on the SE margin of the 1980-86 lava dome and nearby portions of Crater Glacier. By September 26, 2004, the rise in activity led scientists to warn of an increased chance of explosions from the lava dome.

On October 1, 2004, the first of several explosions shot a plume of volcanic ash and gases into the atmosphere from a vent on the southwest margin of the growing welt. Four additional steam and ash explosions occurred through October 5th, and three produced noticeable fallout of fine ash downwind.

Following the brief series of small steam-and-ashexplosions, the volcano settled into a quieter phase of activity. On October 11, 2004, spines of solid, but still hot, lava punctured the surface of the deformed glacier, initiating a new dome-building phase of activity.

By late October, a larger whaleback-shaped extrusion of solid lava (called a spine) had emerged from the crater floor. During the 3+ years of the eruption a series of hot, solid, smooth-sided lava spines rose from the vent, bulldozed their way across the crater floor, and piled up to form a new dome 460 m (1,500 ft) high.

In contrast to the 1980s, when the lava dome grew by effusion of thick lava flows, the 2004–2008 dome grew by continuous extrusion of degassed lava spines that had mostly solidified at less than 1 km (0.62 mi) beneath the surface. From October 2004 to late January 2008, about 92 million cubic meters (121 million cubic yards, or 36,800 Olympic swimming pools) of lava had erupted onto the crater floor— This would be enough to pave seven highway lanes three feet thick from New York City to Portland, Oregon— and is roughly equivalent to the volume of the 1980–86 lava dome. Together, the two domes have refilled about 7% of the Mount St. Helens crater.

Crater Glacier, which formed after 1986 between the south crater wall and the 1980-86 lava dome, had only a small influence on growing lava spines, but was dramatically affected by the new dome growth. The lava spines divided the glacier into two arms piling it upon itself pushing it to flow rapidly northward toward the front of the 1980 breach (or amphitheater).

The 2004-2008 eruption was notable in its lack of explosive events. The first of only two significant explosions occurred on January 16, 2005, at the start of a winter storm. There were no recognizable precursors. Monitoring instruments located in the crater were destroyed, and a few others stopped for hours- or seconds-long intervals, probably as a result of ash in the air and on instruments, blocking radio signals. Ejected ballistic blocks landed hundreds of meters away, and ash fell on the volcano's flanks.

The second explosion occurred under good viewing conditions late on the afternoon of March 8, 2005. Again, there were no recognizable precursors, but there was a very subtle increase in seismicity a few hours before the event. A dense ash cloud rose from the crater and ballistic- impact craters were observed in the snow on the north flank of the old dome. A dominantly white vapor cloud drifted toward the east-northeast, reaching an altitude of 11 km (6.8 mi). Minor amounts of ash were erupted, and dustings were reported in Ellensburg, Yakima, and Toppenish, Washington as far as 150 km (93 mi) from the volcano. 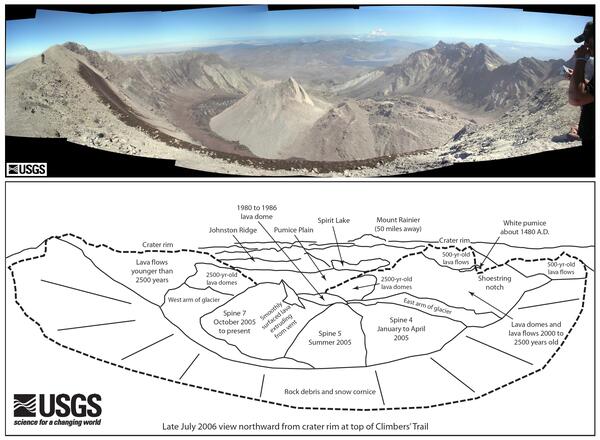 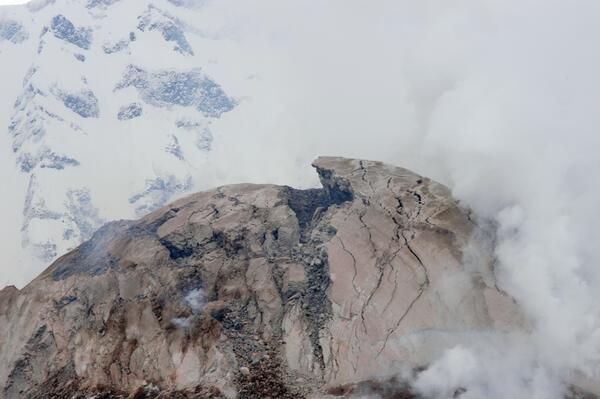 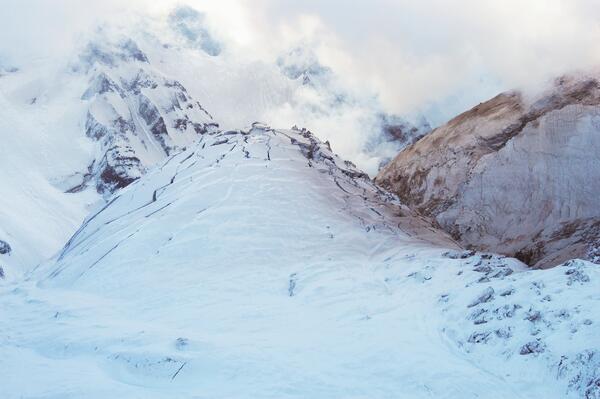 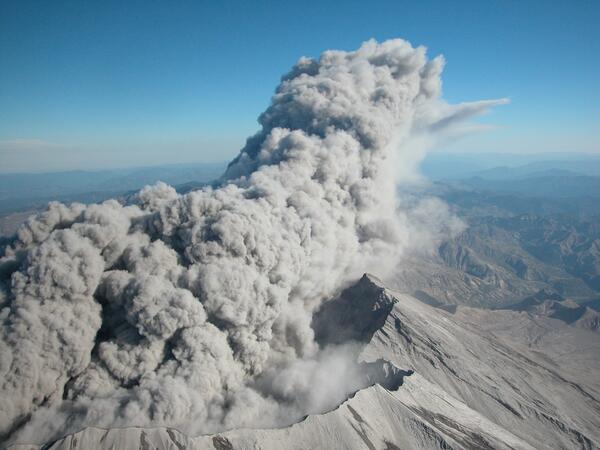