Studying the ground surface movement around a volcano (also called deformation) can give clues to what is happening beneath the surface.

By measuring deformation scientists can estimate the depth, volume, and volume change of the magma reservoir beneath the volcano. Less is known about deformation at stratovolcanoes, like Mount St. Helens, than at large shield volcanoes and calderas where surface movements tend to be larger and more extensive. Since its reawakening in 1980, Mount St. Helens has become a natural laboratory for the study of deformation at an accessible stratovolcano.

GPS data record the precise three-dimensional location of a point on the surface of the Earth at a specific time. By comparing that location at different times, it is possible to know how much movement has occurred.

During the summer 2000, the USGS Cascades Volcano Observatory (CVO) installed and made initial GPS observations at more than 40 standard points of reference (benchmarks) on and around Mount St. Helens. The first repeat survey was made in summer 2003, but showed no significant overall movement with one exception: a single station on the 1980-86 lavadome moved down and east-northeastward, toward the center of the dome, which are interpreted to be a signal of cooling and compaction of the lava dome and top portion of the volcanic conduit.

Subsequent measurements of the campaign network track the subtle movements that accompanied the 2004-08 dome building eruption. The repeated measurement of the large network of campaign GPS stations showed inward and downward motion of the ground surface during the 2004-08 eruption, when magma was being withdrawn from a reservoir beneath the volcano, and a subtle reversal in those trends when the reservoir started to repressurize afterward. For details on how the deformation varied in time, we used measurements from a network of continuous GPS stations.

The first continuously recording GPS instrument was installed in May 1997 at the Mount St. Helens National Volcanic Monument's Johnston Ridge Observatory (JRO). Although it recorded the regional motion of the crust in the area (see below) it recorded essentially no movement related to the volcano until late September 2004 when a swarm of shallow earthquakes rocked the crater floor.

Within a few weeks of the start of 2004 volcanic unrest, CVO and the NSF-funded Plate Boundary Observatory installed 11 new continuous GPS stations. Additional continuous GPS stations were added by the Plate Boundary Observatory in the following years (totaling 25 in 2013). The data from these instruments can be viewed via the monitoring webpage map.

In addition to the episodic volcanic deformation, there is a steady background north-northeastward movement of all stations at a rate of 6 mm/yr (0.25 in/yr) that is related to the subduction of the Juan de Fuca plate beneath the North American plate, and periodic (~ every 3 years) eastward lurches of a few mm related to episodic movements deep on this plate interface.

When the 2004 eruption began it became clear that instruments would need to be placed very close to the vent to record deformation associated with lavadome growth, because the greatest amount of deformation was occurring at the top of the conduit.. CVO developed small, self-contained, instrument packages, called "spiders" (link to Rapid-Response monitoring section) that included GPS, along with other, sensors and could be slung from a helicopter to otherwise inaccessible or hazardous sites near the vent. The spiders "rode" on the spines as they erupted, which gave direct measurements of the rate material was being erupted from the volcano (extrusion rate). This was the first time such a direct measurement had ever been made.

Unusually shallow, regularly spaced "drumbeat" earthquakes occurred throughout the 2004-2008 dome-building eruption of Mount St. Helens, and a network of tiltmeters was installed in the crater to measure possible associated ground deformation. The tiltmeters recorded thousands of tilt events, but each event lasted too long to be directly caused by the drumbeat earthquakes.

A typical tilt event consisted of a rapid tilt of the ground away from a vent located near the center of the existing 1980s lava dome that was followed by a more gradual tilt reversal. These events were only recorded by tiltmeters very close to the vent, which is consistent with them being caused by the slow eruption (extrusion) of a plug of lava or by cycles of pressurization within the volcanic conduit near the shallow (< 1 km or 3,280 ft deep) interface between the rising plug and the 1980s lava dome. The tilt events ceased when the eruption ended in late January 2008. Tilt data are still being collected to monitor for possible volcanic activity. 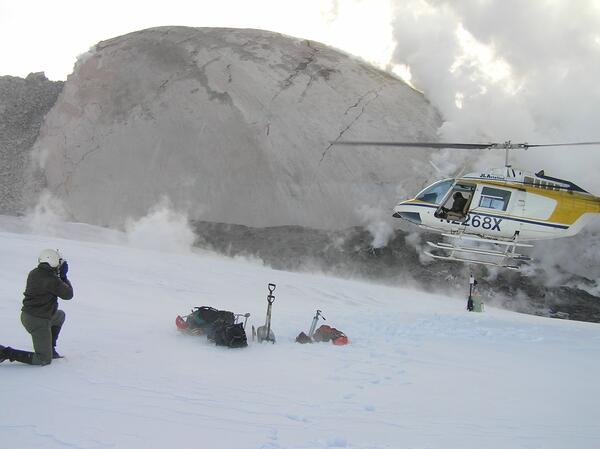 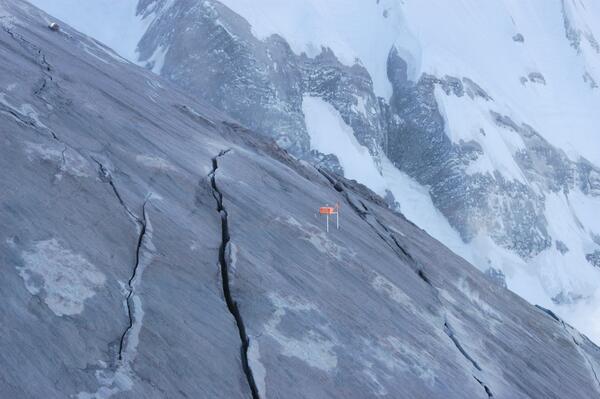