Holocene Activity Prior to May 18, 1980 Eruption

The bulk of the pre–1980 edifice of Mount St. Helens (above about 1,800 m or 6,000 ft) was constructed during the Spirit Lake Stage, which includes the most complex part of the eruptive history. Excellent preservation of deposits, and numerous ages from radiocarbon and tree-ring dating, provides considerable detail for this stage. Volcanism was intermittent, with lulls lasting from a few to about 600 years. As in earlier stages, Spirit Lake volcanism erupted mostly dacite, but significant amounts of basalt and andesite were also erupted. The Spirit Lake Stage is subdivided into six eruptive periods—the Smith Creek, Pine Creek, Castle Creek, Sugar Bowl, Kalama, Goat Rocks, and the Modern period of activity that began in 1980.

During the Smith Creek period, two periods of highly explosive activity (3.90 to 3.85 ka and 3.5 to 3.3 ka) deposited large amounts of tephra (set "Y") and pyroclastic flows. The second period was initiated with a highly explosive eruption ("Yn") that was about four times larger than the one in 1980, making it the most voluminous eruption in Mount St. Helens' history. These tephras have been identified as far away as 950 km (590 mi) from source. During late Smith Creek time, a lava dome was extruded and huge lahars swept down the Toutle River and probably reached the Columbia River. The primarily ash-producing eruptions during Smith Creek time did not significantly change the volcano's shape.

During the Pine Creek Eruptive Period, Mount St. Helens ejected tephra, produced pyroclastic flows and dacite domes, and two small debris avalanches occurred on its north flank. Repeated collapse of hot, growing lavadomes produced an extensive and broad fan of volcanic debris as much as 180 m (600 ft) thick on the south flank of the volcano. Similar deposits on the north flank can still be found as far downstream as the town of Toutle.

Andesite and basaltic andesite lava flows erupted late in this period (Muddy River andesite) along with accompanying pyroclastic flow and lahar deposits of similar composition. Based upon analysis of exposed dacite domesfound in the walls of the 1980 eruption crater, by the end of the Pine Creek Period the volcano was a cluster of lava domes that had grown to a maximum elevation of about 2,100 m (7,000 ft).

Recent work has identified products from three separate mildly explosive basaltic eruptions ("Bu" 1, 2, and 3) that took place over a time span of about 150 to 200 years (about 1.9 to 1.7 ka). Several basalt to dacite lavaflows erupted in the same time span, which transformed the Pine Creek-age cluster of domes into a classic cone shaped composite volcano. Three basaltic lava flows poured down the flanks of the volcano reaching up to 13 km (8 mi) from their source - the preCave (1.8 ka) and Cave basalt (1.895 ka) on the south flank, and the Castle Creek basalt (1.74 ka) on the north flank. The summit elevation at the end of Castle Creek time was about 2,450 m (8,000 ft).

During the Sugar Bowl Eruptive Period, three lava domes were built on the flanks of Mount St. Helens. Explosive eruptions associated with growth of the Sugar Bowl Dome produced a tephra layer (set "D") and two lateral blasts that affected an area about one-tenth as large as the 1980 eruption. The Sugar Bowl period was short lived, produced a small volume of volcanic materials, and did not significantly change the appearance of the volcano.

The early Kalama period was initiated by two large explosive eruptions ("Wn" and "We") in 1479 and 1482. Eruptions this powerful rarely occur so closely spaced together in time, which is a highly unique pairing in the context of worldwide volcanoes studied to date. Over the next 10 to 20 years, several lava domesgrew in the volcano's crater and were disrupted by explosive eruptions. Lahars and pyroclastic flows associated especially with early Kalama eruptions are abundant on the volcano's west and south flanks.

The middle Kalama phase began about 1510 with eruption of andesite as pyroclastic flows (which generated hot lahars), a few lava flows, and tephra (set "X"). The middle phase peaked at about 1535 when many thick andesite lava flows erupted on all flanks of Mount St. Helens, including the Worm Complex flows, near to the present day climbing route. This phase ended by 1570.

The most significant event of the late Kalama phase was growth of a large dacitedome at the summit (Summit Dome). It probably took nearly 100 years for the Summit Dome to grow (between 1620 to 1720) and give Mount St. Helens its pre–1980 form. During growth, the dome shed material as pyroclastic flows and lahars on all flanks of the volcano, but the highest concentration was to the southwest, northwest, and southeast. Mount St. Helens acquired its pre–1980 cover of glaciers as a result of new elevation achieved by the growth of the Summit Dome.

The Goat Rocks period was short and relatively small. An explosive eruption in 1800 produced a tephra deposit (set "T") that was followed in 1801 by an andesite lava flow, called the "Floating Island," on Mount St. Helens' north flank. Eruptions observed intermittently from 1831 to 1857 produced ashand the Goat Rocks Dome, whose growth also resulted in lahars and a small fan of volcanic debris.

The last significant eruption of Mount St. Helens before 1980 is thought to have occurred in 1857. Minor explosions reported in 1898, 1903, and 1921 were probably steam– driven and did not involve magma being delivered to the surface. Eruptions of the Goat Rocks period did not significantly change the appearance of Mount St. Helens, but they added the final pieces to the edifice and set the stage for the 1980 eruption. 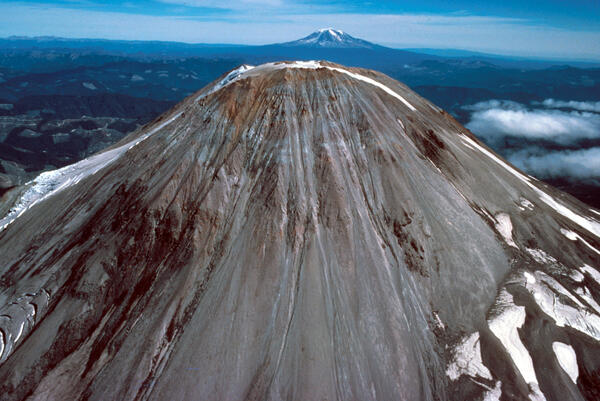 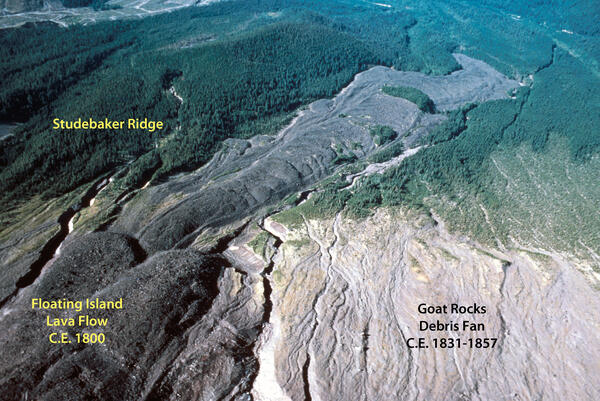 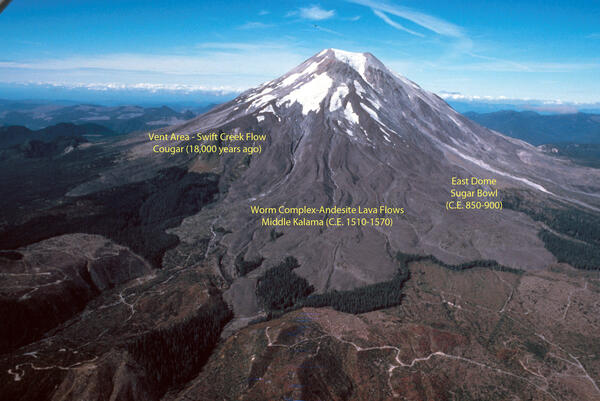 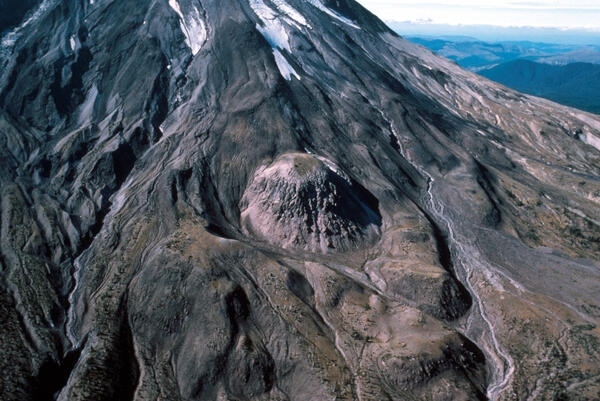 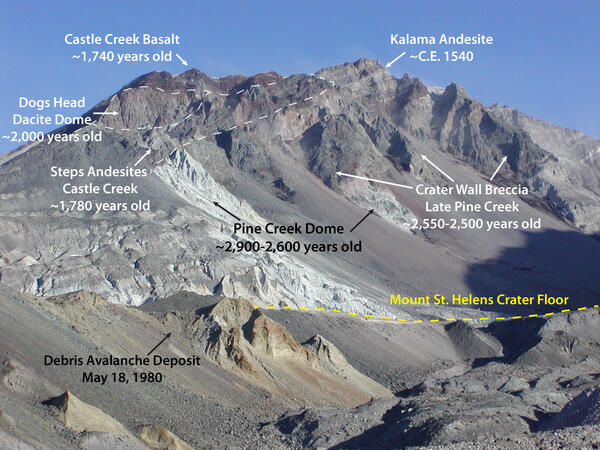