Data on the distribution and abundance of seabirds at sea have been used for many decades to assist in understanding the marine ecology of seabirds away from their breeding colonies, measure population status and trends, assess the impact of human activities on ocean habitats and fish stocks, and to identify critical marine habitats for seabirds.

Use of the North Pacific Pelagic Seabird Database (NPPSD)

Data on the distribution and abundance of seabirds at sea have been used for many decades to assist in understanding the marine ecology of seabirds away from their breeding colonies, measure population status and trends, assess the impact of human activities on ocean habitats and fish stocks, and to identify critical marine habitats for seabirds. To facilitate these efforts— and in collaboration with colleagues in many different governments (US, Canada, Russia, Japan) and agencies (particularly U.S. Fish and Wildlife Service and Bureau of Ocean Energy Management), universities, and non-profits— we compiled data that was collected over 47 years (1973-2019) by dozens of organizations and hundreds of biologists to create the North Pacific Pelagic Seabird Database (NPPSD). Published online in 2005, and upgraded in 2015 and 2020 (see History below), the current version of the NPPSD contains data on >20 million marine birds and >360 thousand mammals observed at sea during >460,000 strip survey transects (“samples”) in an area spanning the North Pacific from the Arctic to Hawaii, and from California to South Korea (Figure 1), an area that is about 50% larger than the continental United States.

Since the NPPSD was published in 2005, it has been used 85 times (we know of) to address questions (Figure 2) that pertain mostly to “wildlife management” (relating to monitoring and conserving seabird populations, and regulating threats), “ecosystem dynamics” (response of seabirds and communities to changing environments), “fisheries management” (mitigating impacts of fisheries and bycatch on populations), or studies of “animal ecology” (documenting species biology, trophic ecology and biogeography). Primary users of the NPPSD have been government (52%) and university (25%) scientists. Remaining users were graduate students (6%, 3 PhD, 2 MSc), consulting companies (9%) and non-profits (7%).  Products that report on analyses of NPPSD data were mostly peer-reviewed journals (55%), graduate theses (6%), and agency or institution reports (39%), of which most were published internally and are available online (see bibliography below).

Within these major categories of use, a variety of specific issues have been examined by investigators. About half of all issues investigated using NPPSD data (Figure 3) have related to anthropogenic impacts, including “threats to populations” (e.g., from oil spills, offshore energy developments, bycatch in fishing gear, natural disasters), “climate change” (e.g., effects of global warming on seabirds due to sea-ice loss, changing migratory behavior, shifting habitat boundaries, altered food webs), and issues concerning “endangered species” (e.g., population status and trends, hotspots, monitoring strategies, conservation and recovery plans).  The remaining issues of interest relate to the natural history and ecology of species and communities, including “distribution and abundance” (e.g., ecological niches, abundance patterns at different spatial scales), “trophic relationships” (e.g., prey diversity, consumption and energy flow), “habitat use or quality” (e.g., habitat characteristics defined by currents, oceanography, topography, productivity), and “community ecology” (e.g., structure and functional relationships with and among seabird communities living in variable environments). Finally, the NPPSD has been used as a source for “information transfer” to both public and scientific community users (e.g., seabird atlases, database user guides and status reports, workshop support).

Following this summary about NPPSD users is a bibliography of user citations (to date), and a brief history of development of the NPPSD. There may be citing documents we have missed.

Cunningham, J. T. (2017). The use of seabirds as indicators of changes in the marine environment through provisioning and population trends. M.Sc.. Thesis, University of Guelph.

Holland-Bartels, L., and B. Pierce (2011). An evaluation of the science needs to inform decisions on Outer Continental Shelf energy development in the Chukchi and Beaufort Seas, Alaska. U.S. Geological Survey Circular 1370:1–278.

Humphries, G. R. W. (2010). The ecological niche of storm-petrels in the North Pacific and a global model of dimethylsulfide concentration. M.Sc. Thesis, University of Alaska, Fairbanks:1–103.

The need for a comprehensive geographic database on the pelagic distribution of seabirds in the North Pacific has long been recognized. During the Outer Continental Shelf Environmental Assessment Program (OCSEAP), financially supported by the Bureau of Land Management and administered by agreement with the National Oceanic and Atmospheric Administration (NOAA), millions of dollars were provided from 1973 through 1982 to conduct at-sea surveys of biological resources in advance of oil development on the Alaska Outer Continental Shelf (OCS), and to report on that work. This culminated in an atlas on the "Pelagic Distribution and Abundance of Seabirds in the Gulf of Alaska and Eastern Bering Sea" (Gould et al., 1982), which documented the at-sea distribution and abundance of about 65 seabird species in Alaska. This atlas was based on 11,400 ship-based and aerial transects conducted in the Gulf of Alaska and SE Bering Sea between 1975-1978. It was one of the earliest marine bird atlases produced worldwide. It was also among the first to use computer generated maps, although the field data were all entered onto datasheets and then later keypunched onto cards for transfer to computer.

After OCSEAP funding ended, surveys in Alaska continued to be funded by the U.S. Fish and Wildlife Service (FWS) and under a few institutional research programs. Most of the original OCSEAP surveys and other surveys conducted in the 1970s and early 1980s were archived on a single mainframe computer at FWS headquarters in Anchorage. As personal desktop personal computers came into wide use through the 1980s, the FWS mainframe was retired and these data became inaccessible (although data were stored on tapes, and subsequently retrieved by us). Consequently, after the Exxon Valdez oil spill in 1989, pelagic survey data that might be used to estimate birds at risk in the path of the spill were not readily available. However, R. Glenn Ford (Ecological Consulting Inc., Portland OR) had compiled some OCSEAP Alaska datasets for his own research, and these data were used to estimate birds at risk in the oil spill zone (Piatt et al. 1990). Piatt and Ford (1993) used this same database to estimate the distribution and abundance of threatened Marbled Murrelet populations in Alaska, as well as to estimate population size of some other common seabird species. Outside the original atlas, these were the first uses of a computerized Alaska seabird database for addressing wildlife management issues.

Galvanized by these efforts, and with support from the Minerals Management Service (MMS, now Bureau of Ocean Energy Management; BOEM), we began in earnest to compile pelagic seabird datasets into a single, accessible database, and created the first “Computerized Pelagic Seabird Atlas for Alaska” in 2000 (Piatt and Ford 2000). For this database, we were able to retrieve digital records of all pelagic surveys that were retained on archived mainframe tapes at FWS in Anchorage, and at the National Ocean Data Center (NODC) in Washington, D.C., to create database with records obtained between 1973 and 1982 (Figure 4)  This effort was initiated while we worked for the FWS Research Division (Region 8), but by the time it was completed the Research Division had been moved from FWS to the Biological Division of the U.S. Geological Survey (USGS), the research agency for the Department of Interior. The USGS continues to archive and maintain pelagic seabird data for studies funded and/or conducted by FWS, USGS, BOEM and the National Park Service (NPS).

With further support from the North Pacific Marine Research Institute (later renamed the “North Pacific Research Board”, or NPRB) in 2002, USGS and USFWS scientists created the first version of the North Pacific Pelagic Seabird Database (NPPSD) by compiling a variety of digital datasets from many individual investigators and organizations, including DOI agencies (FWS, USGS, BOEM, NPS), NOAA, and several universities (e.g., University of Alaska, Fairbanks; University of California, Irvine) that engaged in large-scale multidisciplinary studies that included seabird surveys as part of their studies, such as ISHTAR (Inner Shelf Transfer and Recycling in the Bering and Chukchi Seas, late 1980s) and PROBES (Processes and Resources of the eastern Bering Sea Shelf, 1990s). We also entered hand-written data records obtained from thousands of transects recorded on OCSEAP or FWS field data forms by observers in the 1970s and 1980s. We then integrated these new datasets with the OCSEAP, NODC, and FWS data that had been compiled earlier. Notably, these new records included surveys conducted far outside Alaska continental shelf waters, e.g., from a research cruise to Hawaii, NOAA research vessel transits to Alaska from California and Washington, and extensive surveys of the western Central Pacific to Japan as part of an observer program of high-seas drift net fisheries in that region. Published in 2005, and distributed on CD, the NPPSD v.1 included data from 465 individual cruises conducted between 1974 and 2002, during which 61,195 strip transects were surveyed for birds and mammals (Drew and Piatt 2005; see Table 1, Figure 5). Methods and formats used in recording bird observations were not well standardized in the 1970s-1990s, and we had to reformat every new dataset, translate (cross-walk) and standardize codes for environmental conditions, platforms, species names, behaviors, etc., compile and report metadata for each survey, create an Microsoft ACCESS relational database, and develop queries for extracting standardized data from the raw database.  All of this was documented in a user’s manual (Drew and Piatt 20015).

More data were collected during the 2000s and 2010s and added to create NPPSD v.2 (Drew and Piatt 2015, Drew et al. 2015), containing surveys from a broader geographic range within the North Pacific, including new observations made offshore of the Russian Federation, Japan, Korea, Canada, Oregon, and California. The largest contribution external to Alaska waters were from Canada, where a pelagic database for British Columbia had just been published (Morgan et al. 1991) and was included in its entirety; from California, where repeated offshore transects have been conducted for decades (e.g., CalCOFI surveys; Sydeman et al. 2015); and from the Sea of Okhotsk, Russia (unpublished data from V. Shuntov, TINRO). In Alaska, a huge effort to survey Bering Sea seabirds was undertaken by FWS with funding from the NPRB (Kuletz et al. 2008), and USGS conducted surveys in multiple coastal National Parks and National Wildlife Refuges in the GOA and Bering Sea. While still not completely standardized, most data were collected on field computers using just a few different versions of data-logging software, which made assimilation and reformatting into NPPSD less difficult than in the past. After these data were proofed and structured in a common format, the NPPSD v.2 contained 351,674 transects collected between 1973 and 2012, representing a total sampled area of 270,259 square kilometers and extended the time series of samples in some areas—notably the Bering Sea—to four decades (Figure 5).

A substantial body of new survey data were collected in the 2010s under the FWS Pelagic Seabird Survey Program (K. Kuletz) in the Bering and Chukchi seas with funding from BOEM (Kuletz and Labunski 2017); from BOEM-funded environmental assessments in the Arctic (Gall et al. 2013); and from EVOSTC Gulf Watch Alaska surveys conducted in the Gulf of Alaska by USGS, FWS and NPS. With these and other datasets, the NPPSD was upgraded to v.3 in 2020 (Drew and Piatt, 2020), and now includes about 460,298 survey transects that contain abundance and distribution information on over 20 million birds comprising 160 species or other taxa groups observed over 40 years in a region of the North Pacific exceeding 25 million square kilometers. This area includes more than 80% of U.S. continental shelf waters, the most productive U.S. commercial fishery, all Pacific U.S. marine sanctuaries, and Alaska Outer Continental Shelf oil and gas leasing areas. An update to NPPSD v.4 is underway, which will substantially increase the number of transects in NPPSD, include an update on taxonomic codes, and a new database structure (using SQL).

Research related to this project. 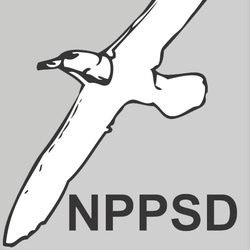 The North Pacific Pelagic Seabird Database (NPPSD) contains survey transect data designed and conducted by numerous partners primarily to census seabirds at sea. The NPPSD includes more than 489,000 transect segments and includes observations of nearly 21 million birds of 252 species collected over the span of 50 years (from 1973 to 2022).
Learn More