Coastal vegetated habitats, such as tidal wetlands, play an active role in the global carbon cycle. This is done through the removal of CO2 by living vegetation through photosynthesis and by the decay of organic matter and its burial for hundreds to thousands of years.

Though tidal wetlands are smaller in size when compared to inland ecosystems (like forests) they have the ability to sequester more carbon per unit area, making them an incredible climate change mitigation tool. Because of the connection of these coastal habitats to the ocean, the carbon in these areas is frequently referred to as blue carbon.

This project involves research conducted by the California Water Science Center and the Western Ecological Research Center in an area of the Humboldt Bay National Wildlife Refuge called the White Slough Unit (WSU).

During the late 19th and early 20th centuries, diking and drainage of salt marshes was done to convert such lands to agricultural use. This practice created arable land by preventing tidal water exchange but also reduced the flow of sediment, carbon, and nutrients both into and out of marshes and resulted in subsidence (loss of elevation) related to oxidation of soils and agricultural practices.

To address these problems, former tidelands are being restored to functional tidal wetlands using two methods that can increase carbon accumulation rates. The beneficial re-use of sediment to fill subsided areas and restore elevations that support salt marsh vegetation and breaching of the historic dikes to restore tidal hydrology.

In 2015, a phased restoration of 40 acres of diked brackish wetland began in the White Slough Unit (WSU) of the Humboldt Bay National Wildlife Refuge (NWR). The non-engineered earthen dikes in the WSU were experiencing seepage, erosion, and spill over, and the former tidelands behind the dikes had experienced 3 feet of land-surface subsidence. The California State Coastal Conservancy (SCC), with funding provided by California Department of Fish and Wildlife (CDFW) Wetlands Restoration for Greenhouse Gas Reduction (GHG) Program, will determine the net greenhouse gas benefit of the White Slough Tidal Wetland Restoration Project. The USGS is aiding this effort by conducting post-project monitoring and investigating the influence of geomorphology on marsh formation and carbon accumulation rates.

The accumulation of carbon in tidal wetlands is highly dependent on local variations in geomorphology and soil processes. Over the long-term, the restored tidal wetlands will create a carbon sink for sequestering greenhouse gases. This study will investigate geomorphic processes that fundamentally influence carbon cycling in a restored tidal wetland. The proposed work is divided into four tasks with each task addressing a key question.

1.    Is the restoration site depositional and acting as a sink for sediment and carbon?
2.    How does soil carbon develop, is there a positive trend, and what are the local drivers?
3.    How does site topography evolve, is there compaction, or formation of tidal channels?
4.    How does the geomorphology influence the rates of sediment accretion and carbon accumulation?

Tidal wetlands contribute to blue carbon sequestration and provide important habitat for fish, invertebrates, shorebirds, and waterfowl while also acting as a filter for pollutants and buffering adjacent lands from flood tides, storms and increase the resiliency of coastal ecosystems to storms and rising sea levels. The California State Coastal Conservancy will use the monitoring results to estimate the net carbon benefit of the restored tidal wetlands and to develop guidance documents for tidal wetlands restoration.

This study will contribute to regional and national tidal wetland assessments. Tidal wetlands function as blue carbon sinks in the long term, but the uncertainties are large and focused post-project monitoring is needed. The proposed work will reduce uncertainty and fill important knowledge gaps regarding the role and the timescale of tidal wetland restoration for mitigating greenhouse gas emissions and determining risks to coastal infrastructure from sea-level rise.

The proposed work is divided into four tasks, each addressing one of the questions mentioned above:

Is the restoration site depositional? (Wetland Sediment Accretion) - Sediment deposition and accretion measurements will be made using surface elevation table (SET) and marker horizons (MH). To do this, a network of 12 SET-MHs will be installed within the restored areas of the WSU. Data gathered from this task will help determine whether the site is depositional and whether accretion co-varies with elevation and distance from sediment source.

How does soil carbon develop? (Soil Carbon Development) - After establishing a network of soil coring sites, three or more soil cores will be collected at each site throughout the duration of the study. Lab analysis of shallow cores (10 cm) will include particle size, bulk density, and total organic carbon (TOC). Samples will also be compared to additional cores collected in two control sites (a natural and formerly restored tidal wetland). Results from this task will be used to determine whether there are measurable increases in TOC and to compare carbon accumulation with the control sites. To determine the extent to which hydroperiod, salinity, and vegetation are drivers of carbon accumulation these variables will be measured to whether these drivers co-vary with the accumulation of TOC.

How does geomorphology influence rates of sediment accretion and carbon accumulation? (Eco-geomorphic Feedback) - The geomorphology of the restored areas fundamentally determines how carbon is transported into and out of restored salt marshes. Eco-geomorphic feedbacks results in an equilibrium elevation where plant productivity and sediment trapping are maximized. This task will investigate the influence of topography on sediment accretion and organic carbon accumulation using the monitoring data collected in Tasks 1, 2, and 3. 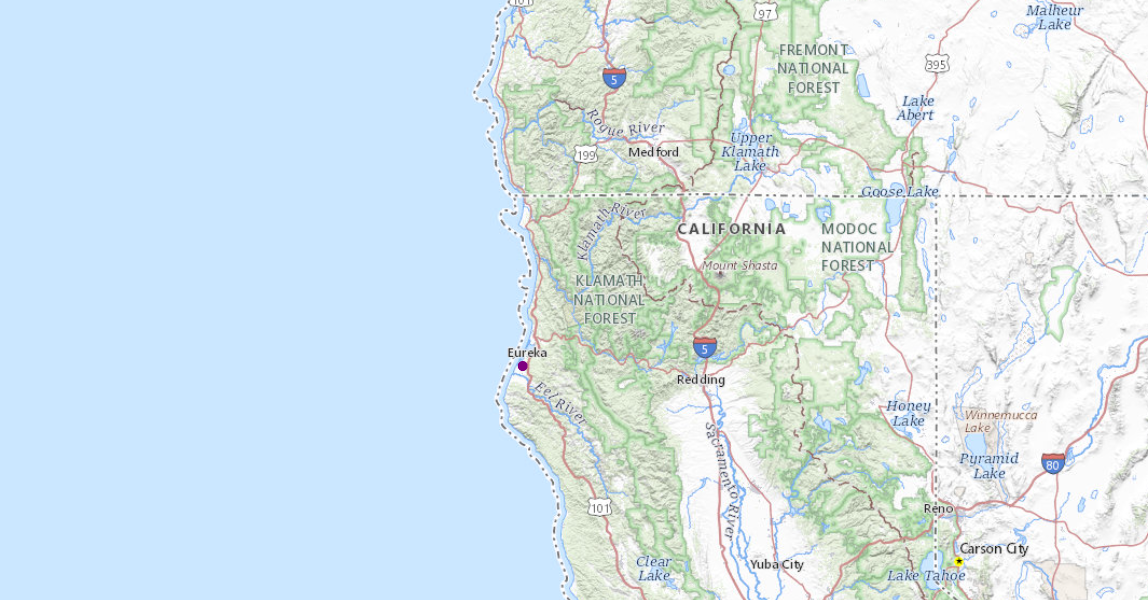 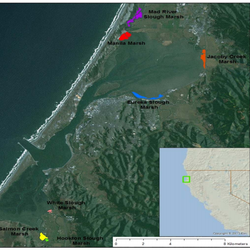 Suspended-sediment measurements are essential for coastal planning, resource management, and for assessing the sustainability of salt marshes in relation to expected sea-level rise. Suspended sediment can have positive or negative effects, depending on its characteristics and amount, and on the location and ecosystem services of interest. Sediment deposition in salt marshes helps sustain marsh...
By
California Water Science Center
link
October 24, 2018

Suspended-sediment measurements are essential for coastal planning, resource management, and for assessing the sustainability of salt marshes in relation to expected sea-level rise. Suspended sediment can have positive or negative effects, depending on its characteristics and amount, and on the location and ecosystem services of interest. Sediment deposition in salt marshes helps sustain marsh...
Learn More
link 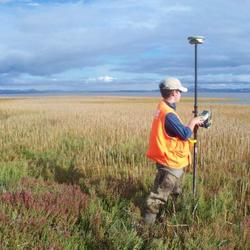 USGS WERC’s Dr. Karen Thorne, her team of reseachers, and her partners are currently taking a local site network approach to describe current and future conditions and projected responses of coastal ecosystems to sea-level rise and other stressors. The Coastal Ecosystem Response to Climate Change (CERCC) program’s goal is to understand how ecosystems vary in their ability to keep up with sea-level...
Learn More
May 28, 2021

Wetlands represent the largest component of the terrestrial biological carbon pool and thus play an important role in global carbon cycles. Most global carbon budgets, however, have focused on dry land ecosystems that extend over large areas and have not accounted for the many small, scattered carbon-storing ecosystems such as tidal saline wetlands. We compiled data for 154 sites in mangroves and