A partnership between the USGS, Pepperwood Preserve, and Black Swift LLC aims to map soil and fuel moisture over wildfire-prone landscapes.

USGS scientists, industry engineers, and an innovative NGO are partnering to map surface soil moisture over 13 km2 of wildfire-prone grasslands, oak lands, and closed-canopy forest in Sonoma County, California.  The partnership is exploring how to improve our ability to measure water in ways that inform land and water resource management practices during wildfire season and during droughts and floods. The team will map surface soil moisture using an uncrewed aircraft system (UAS) equipped with an L-band radiometer along with multispectral cameras in the visible, thermal, and near infrared regions.

In October 2021, the team spent two days flying the first of three missions designed to map seasonal and spatial variability in soil moisture across this fire-prone landscape. They intend to explore whether we can separate soil moisture from fuel moisture, and whether soil moisture might be a leading indicator for fuel moisture. Pepperwood Preserve hosts a large network of soil moisture monitoring sites that help calibrate this effort.

The first flight captured dry soils during one of the worst droughts ever recorded in California, just before a three-day atmospheric river brought ~10 inches of rain to the preserve. Before the atmospheric river, surface soil moisture conditions were the driest on record, averaging about 15% across the preserve. Afterward, soil moisture levels had doubled to 30% or higher. Although this event caused significant runoff, a smaller storm may have produced little to no runoff given the low antecedent moisture content.

Initial results indicate that even during extended drought, soil moisture has a high amount of variability depending on vegetation cover and other local variations in soil type and geology.

Two upcoming flights in the winter and spring will complete a seasonal picture of soil moisture variability from wilting point to field capacity and in between. These data will precisely identify whether antecedent soil moisture is in deficit (drought conditions) or surplus (flooding conditions) and where they occur on the landscape at a fine spatial scale, with major implications for runoff forecasting in winter and wildfire risk modeling during the fire season.

Working with the USGS and Pepperwood Preserve, Black Swift Technologies LLC deployed radiometers on a UAS, the Super Swift (S2). The S2 is a fixed-wing, electric UAS with a three-meter wingspan, propelled into the air with a pneumatic launcher. The Black Swift radiometer system, designed with NASA Goddard, is a lightweight system of sensors that includes multispectral cameras in the visible, thermal, and near infrared regions of the electromagnetic spectrum. Used with an L-band radiometer, these data can be used to map surface soil moisture.

Soil moisture is particularly difficult to model in many steep lands where solar insolation, geology, ecology, and climate all vary. Soil moisture station data are sparse across the state, particularly in mountainous regions where most of the water supply originates. Point measurements of soil moisture do not typically represent the surrounding area, especially at scales from 10 to 100s of meters. In contrast, satellite remotely sensed global soil moisture products are at too coarse a resolution for regional to local applications and are not temporally resolved. UAS data is collected at finer spatial scales over an intermediate sized footprint. This data set, in combination with a dense network of soil sensors in varied soil types, can be used to interpolate between station locations and, importantly, to extrapolate through the soil profile to calculate the soil water deficit or surplus needed for reservoir forecasts and the available water for plants and ecosystems.

Pepperwood Preserve’s extensive soil moisture monitoring network has over 20 stations that enable the validation of fine scale (10-meters resolution) maps derived from L-band radiometer and other remote sensing data. In addition, over 100 field measurements of soil moisture and vegetation water content taken concurrently with the flights will provide more data to refine the soil moisture algorithms and identify the relative signal from vegetation-covered soil. 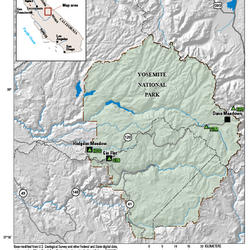 Soil moisture is a critical variable for understanding the impacts of drought on ecological, hydrological, and agricultural systems, as soil moisture content has a direct affect on runoff amounts. Runoff occurs as the result of precipitation (both rainfall and snowfall) that is in excess of the demands of evaporation from land surfaces, transpiration from vegetation, and infiltration into soils...
By
California Water Science Center
link
September 9, 2020

Soil moisture is a critical variable for understanding the impacts of drought on ecological, hydrological, and agricultural systems, as soil moisture content has a direct affect on runoff amounts. Runoff occurs as the result of precipitation (both rainfall and snowfall) that is in excess of the demands of evaporation from land surfaces, transpiration from vegetation, and infiltration into soils...
Learn More