The coal industry in the United States has undergone fundamental changes over the past several years that have resulted in a reduction in the number of operating coal mines, the merging or consolidation of numerous coal companies, and a drastic decrease in coal production. Since 2008, when a record of more than 1.17 billion short tons of coal were produced in the U.S., annual coal production volumes have dropped precipitously. In 2018, nearly 756 million short tons of coal were produced, according to estimates by the Energy Information Agency (EIA).  Despite this reduction in annual production, the EIA projects that coal will continue to provide fuel to generate approximately 25 percent of the electricity used in the U.S. The generation of electricity continues to account for the consumption of over 92 percent of coal mined in the U.S. The use of coal to produce coke for steel making, as well as other industrial, commercial, and institutional uses, accounts for the remainder of U.S. coal consumption.

There is often confusion in the use of the terms coal “resources” and “reserves”. The two terms are often used interchangeably, but there are significant differences in their definitions. The terms are defined, from USGS Circular 891, as follows:

Coal resources – include in-place tonnage estimates that are determined by summing the volumes for identified and undiscovered coal deposits, utilizing a specified minimum thickness.

To be classified as economically extractable, the current market value of the extracted coal must be greater than the total cost to extract it.

The task of the U.S. Coal Resources and Reserves Assessment Project is to conduct a systematic determination of recoverable coal resources and reserves, on a regional basis for all major coal provinces in the United States. This differentiates the current coal assessment project from previous generations of coal assessment projects, in which typically only total coal resources were calculated.

The Project is focused on defining coal resources and reserves in the Northern Great Plains and Rocky Mountain Coal Provinces, with an emphasis on determining coal resources and reserves on Federal lands. The first U.S. coal basin to be evaluated was the Powder River Basin (PRB) in Wyoming and Montana, because it has been the most productive coal basin in the United States over the past 25 years. The results of the PRB assessment were published in Professional Paper 1809 in 2015.

Currently, assessment studies in three separate areas of the Greater Green River Basin have been started – an assessment of the Little Snake River coal field and Red Desert area (in south-central Wyoming) is nearly completed; an assessment of the Yampa coal field in northwest Colorado is ongoing; an assessment of the eastern portion of the Rock Springs Uplift coal field in Wyoming is also ongoing.  The Greater Green River Basin was prioritized for assessment because it contains vast land areas controlled by the Federal government, large portions of the basin have not been formally assessed for coal resources, and previously proprietary drill hole data have become available for use in geologic modeling and economic evaluations.

The methodology currently utilized by the U.S. Coal Resources and Reserves Assessment Project can be divided into three distinct phases – data collection, data modeling, and calculation of resources and reserves. A generalized outline of the methodology utilized is shown below:

2. restrictions–data that define factors that affect extraction of coal – environmental, land use, legal, and/or technical restrictions.

1. correlation–establishing the stratigraphic position and lateral continuity of individual coal beds within the assessment area.

2. geologic models–incorporate the available geologic data, correlations, and structural features for each coal bed into a geologic model. Determine which coal beds have the thickness, extent, and lateral continuity to be designated as significant–for resources and reserves calculation purposes.

3. GIS models-utilize GIS capabilities to model restrictions and societal data to determine areas where coal extraction is not possible.

4. Composite model–combine geologic and GIS models to produce a composite model of the geology, restrictions, and societal features.

4. reserves determination-interpreted from the cost curve graphs for all significant coal beds.

The Society for Organic Petrology (TSOP)

The Greater Green River Basin (GGRB) is a large, irregularly shaped, intermontane desert basin in the Rocky Mountain coal region. The basin spans are large region encompassing southwestern and south-central Wyoming and northwestern Colorado. The GGRB contains several coal fields of economic importance and there are several active coal mines in the basin, utilizing both surface and underground mining methods. The structural geology is relatively complex, with intra-basin anticlinal features dividing the GGRB into several sub-basins. The coal beds in the GGRB were deposited in fluvial/deltaic and lacustrine paleoenvironments and are Late Cretaceous, Paleocene, and Eocene in Age.

Because of its areal extent, the Greater Green River Basin has been divided into three separate assessments – Little Snake River coal field and Red Desert area (WY), Yampa coal field (CO), and Rock Springs Uplift coal field (WY). The Greater Green River Basin was prioritized for assessment because it contains vast land areas controlled by the Federal government, large portions of the basin have not been formally assessed for coal resources, and previously proprietary drill hole data have become available for use in geologic modeling and economic evaluations.

In 2009, the USGS completed the first digital National Coal Resource Assessment (NCRA) of in-place coal resources. The current generation of U.S. coal assessments will not only be a refinement of the coal resources, but also the systematic determination of the regional coal reserve base in all the major coal provinces in the U.S. The reserve base provides not only estimates of coal resources that are currently economic (reserves), but what may become economic with current technologies (recoverable resources), which is important from a national energy security and policy standpoint. The first U.S. coal basin to be evaluated in this new assessment phase is the Powder River Basin, WY (PRB). The PRB is the single most important coal basin in the U.S. production-wise, supplying over 42 percent of the total coal produced in the U.S. in 2012.

USGS Professional Paper 1809, Coal Geology and Assessment of Coal Resources and Reserves in the Powder River Basin, Wyoming and Montana, was published in 2015. It is the compilation of four USGS Open File Reports into a single publication, covering four different assessment areas in the PRB. Professional Paper 1809 provides an overview of the geology and reports the original resources for the entire PRB, as well as the available coal resources and reserves.

Drill hole data for coal beds in the Paleocene Fort Union Formation in the Williston Basin in Mercer and Oliver Counties, North Dakota

The U.S. Geological Survey conducted an assessment of coal resources and reserves in the Little Snake River coal field and Red Desert area of the Greater Green River Basin in Southwest Wyoming. A comprehensive database was compiled to support this assessment that includes data points for drill-holes and measured sections. Associated with these resources are lithology descriptors, (focusing on coal
By
Energy Resources Program, Central Energy Resources Science Center

Probabilistic methodology for the assessment of original and recoverable coal resources, illustrated with an application to a coal bed in the Fort Union Formation, Wyoming

Coking coal of the United States—Modern and historical coking coal mining locations and chemical, rheological, petrographic, and other data from modern samples

Coking coal, or metallurgical coal, has been produced in the United States for nearly 200 years. Coking coal is primarily used in the production of coke for use in the steel industry, and for other uses (for example, foundries, blacksmithing, heating buildings, and brewing). Currently, U.S. coking coal is produced in Alabama, Arkansas, Pennsylvania, Virginia , and West Virginia. Historically, coki
By
Energy and Minerals, Energy Resources Program, Geology, Energy & Minerals Science Center
January 13, 2021

An assessment of the economic potential of lignite and leonardite resources in the Williston Basin, North Dakota

The Bureau of Land Management (BLM) requested assistance from the U.S. Geological Survey (USGS) to conduct an assessment study to identify areas that may have economic potential for the future extraction of lignite and leonardite resources in the Williston Basin in North Dakota. The study will be used by the BLM to assist with the preparation of a revised resource management plan for the Williston
By
Energy Resources Program, Central Energy Resources Science Center
December 19, 2019

The U.S. Geological Survey is studying regional-scale assessments of resources and reserves of primary coal beds in the major coal bed basins in the United States to help formulate policy for Federal, State, and local energy and land use. This report summarizes the geology and coal resources and reserves in the Little Snake River coal field and Red Desert assessment area in the Greater Green River
By
Energy Resources Program, Central Energy Resources Science Center
December 18, 2019

Gas emissions, tars, and secondary minerals at the Ruth Mullins and Tiptop coal mine fires

Both the Tiptop and Ruth Mullins coal fires, Kentucky, were reinvestigated in 2009 and 2010. The Tiptop fire was not as active in 2009 and may have been on the path to burning out at the time of the 2009 visit. The Ruth Mullins coal mine fire, Perry County, Kentucky, has been the subject of several field investigations, including November 2009–February 2010 investigations in which we measured gas
By
Energy Resources Program, Geology, Energy & Minerals Science Center
December 5, 2017

Chemical properties of coal largely determine coal handling, processing, beneficiation methods, and design of coal-fired power plants. Furthermore, these properties impact coal strength, coal blending during mining, as well as coal's gas content, which is important for mining safety. In order for these processes and quantitative predictions to be successful, safer, and economically feasible, it is
By
Energy Resources Program, Geology, Energy & Minerals Science Center
September 30, 2016

In the 1970s and 1980s, C.S. Venable Barclay conducted geologic mapping of areas primarily underlain by Cretaceous coals in the eastern part of the Little Snake River coal field (LSR) in Carbon County, southwest Wyoming. With some exceptions, most of the mapping data were never published. Subsequently, after his retirement from the U.S. Geological Survey (USGS), his field maps and field notebooks
By
Energy Resources Program, Central Energy Resources Science Center
March 11, 2016

Understanding the distribution of coal-bearing geologic units in Antarctica provides information that can be used in sedimentary, geomorphological, paleontological, and climatological studies. This report is a digital compilation of information on Antarctica’s coal-bearing geologic units found in the literature. It is intended to be used in small-scale spatial geographic information system (GIS) i
By
Energy Resources Program, Geology, Energy & Minerals Science Center
May 12, 2015

Coal geology and assessment of coal resources and reserves in the Powder River Basin, Wyoming and Montana

This report presents the final results of the first assessment of both coal resources and reserves for all significant coal beds in the entire Powder River Basin, northeastern Wyoming and southeastern Montana. The basin covers about 19,500 square miles, exclusive of the part of the basin within the Crow and Northern Cheyenne Indian Reservations in Montana. The Powder River Basin, which contains th
By
Energy Resources Program, Central Energy Resources Science Center
December 12, 2018 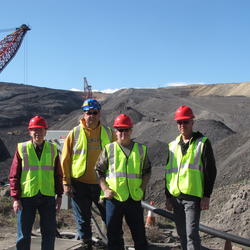 Although often associated with helping fuel the Nation’s growth during the Industrial Revolution, coal is very much part of our space-age present. In 2016, coal-fired power plants provided 30.4 percent of the country’s electricity, and it is an important source of employment in many states.