As the largest and most productive estuary in North America, Chesapeake Bay is a vital ecological and economic resource. In recent decades, however, the bay and its tributaries have been degraded by excessive inputs of nutrients (nitrogen and phosphorus) and sediment from contributing watersheds, and in 1998, the Chesapeake Bay and its tidal tributaries were listed as “impaired” under the Clean Water Act. Consequently, a Chesapeake Bay Total Maximum Daily Load (TMDL) was established for nitrogen, phosphorus, and sediment in 2010 (U.S. Environmental Protection Agency, 2010). The TMDL requires that the seven watershed jurisdictions implement management practices to reduce inputs of nutrients and sediment to meet water-quality standards for dissolved oxygen, chlorophyll, and water clarity in the bay.

The Chesapeake Bay Program (CBP) is a Federal-jurisdictional partnership that is working to meet water-quality standards in the bay. The CBP partners are pursuing an integrated approach to assess and communicate progress in water-quality improvements as the bay TMDL is implemented. This approach includes:

This science summary focuses on results of a U.S. Geological Survey (USGS) study (Moyer and others, 2012) in which an enhanced statistical technique was used to estimate loads of nutrients and sediment to the bay and assess changes in those loads over time. Possible causes of the observed loads and trends are discussed, and ongoing and planned next steps are described.

Documenting trends in nitrogen, phosphorus, and sediment concentrations in the Chesapeake Bay watershed as well as loads of these constituents entering the bay will help assess progress in water-quality improvements associated with the TMDL. The USGS uses existing techniques to determine changes in concentration, which have been described most recently by Langland and others (2012). Because the bay TMDL is focused on changes in loads of nitrogen, phosphorus, and sediment to Chesapeake Bay, the USGS has developed an enhanced statistical technique to describe long-term changes in nutrient and sediment loads. This newer technique was first applied in a USGS study of nutrient concentrations and loads in tributaries to Chesapeake Bay (Hirsch and others, 2010). The technique, known as the “Weighted Regression on Time, Discharge, and Season” (WRTDS) method, is designed to analyze nontidal river-monitoring nutrient and sediment data to assess changes in the loads of these constituents that are delivered to Chesapeake Bay. It has recently been applied in other areas, including the Mississippi River Basin. By adding a second trend-analysis technique, the USGS can now assess changes in water-quality conditions with respect to trends in both concentration and load. The two different approaches to trends are defined as follows:

Trend in concentration: The trend in concentration is a useful measure of the quality of water in a river at a given location. It provides information about temporal changes in the quality of water encountered by aquatic organisms in the river, withdrawn at drinking-water intakes along the river, and experienced by people who use the river for recreation. The trend in concentration is "flow-adjusted," which means that the variability in concentration resulting from the day-to-day variations in streamflow is taken into account. This adjustment prevents the reported trend from being an artifact of the particular sequence of wet and dry years over the period of record and enables the results to be more sensitive to changes in the watershed related to land use, land-use practices, and point-source controls. Trends in concentration reflect the time-averaged conditions in the river, and all days have equal weight in the analysis, regardless of whether they are low-flow days or high-flow days.

Trend in load: The WRTDS computation tracks the annual loads of nutrients and sediment moving past the river-monitoring station and quantifies the trends in these loads. This computation also removes the effect of variations in streamflow by using a statistical technique called “flow normalization.” Both flow adjustment and flow normalization are designed to prevent the trend measure from being an artifact of the sequence of wet and dry years so that it can be more sensitive to changes in the watershed related to land use and (or) implementation of management practices. The primary difference between this new load trend estimate and the concentration trend estimate is that the WRTDS technique does not treat every day as being of equal importance. Because it considers the total load, which is influenced much more by conditions on high-flow days than by those on low-flow days, it is more sensitive to changes on high-flow days.

Trends determined by using both techniques: These two types of trend indicators (concentration and load) serve different purposes: the former describes changes in conditions in the river concentrations over all days of the year, whereas the latter describes changes in the amount of nutrients or sediment (load) that is transported past the station and delivered to the tidal waters of the bay. The two techniques can, in some cases, lead to different conclusions--that is, results obtained by using one technique may show degrading conditions whereas those obtained by using the other technique show improving conditions. Typically, sources of contamination that are relatively constant over a wide range of flow conditions, such as wastewater-treatment plants (WWTPs) or groundwater contributions to streamflow, have a large effect on concentration trends but a smaller effect on load trends. In contrast, sources of contamination that respond to wet-weather conditions, such as stormwater runoff from urban or agricultural land or erosion of soil from construction sites, farms, river channels, or floodplains, have a large effect on load trends but a smaller effect on concentration trends.

The USGS report “Comparison of two regression-based approaches for determining nutrient and sediment fluxes and trends in the Chesapeake Bay watershed” by Moyer and others (2012) documents the enhancements made to the WRTDS method (including new computations for total nitrogen, orthophosphorus, and sediment); compares the results to those obtained by using previously available methods; and presents trend results for loads of total nitrogen, nitrate, orthophosphorus, total phosphorus, and suspended sediment at the nine USGS River Input Monitoring (RIM) stations in the Chesapeake Bay watershed. These nine stations are located on the three largest tributaries to Chesapeake Bay--the Susquehanna, Potomac, and James Rivers; the Choptank River on the eastern shore and the Patuxent River on the western shore of Maryland; and the Rappahannock, Mattaponi, Pamunkey, and Appomattox Rivers in Virginia. The nine RIM stations are part of the CBP nontidal water-quality monitoring network, which consists of 125 stations. Collectively, the drainage basins upstream from the RIM sites account for about 78 percent of the land area of the bay watershed. A large portion of the point- and nonpoint-source loads from the Washington, D.C., Baltimore, Maryland, and Richmond, Virginia, metropolitan areas, however, originates in the 22 percent of the watershed (shown in white in figure 1) from which runoff and effluents do not flow past the RIM sites on their way to the bay. Consequently, practices that are implemented in this area to reduce loadings from these major metropolitan areas, as well as from a number of smaller communities and areas of other land-use types located near the bay, are not reflected in the RIM results. Additional information about the loadings from the parts of watershed that are not monitored by the RIM sites also must be considered in any analysis of the causes of water-quality trends in the bay. 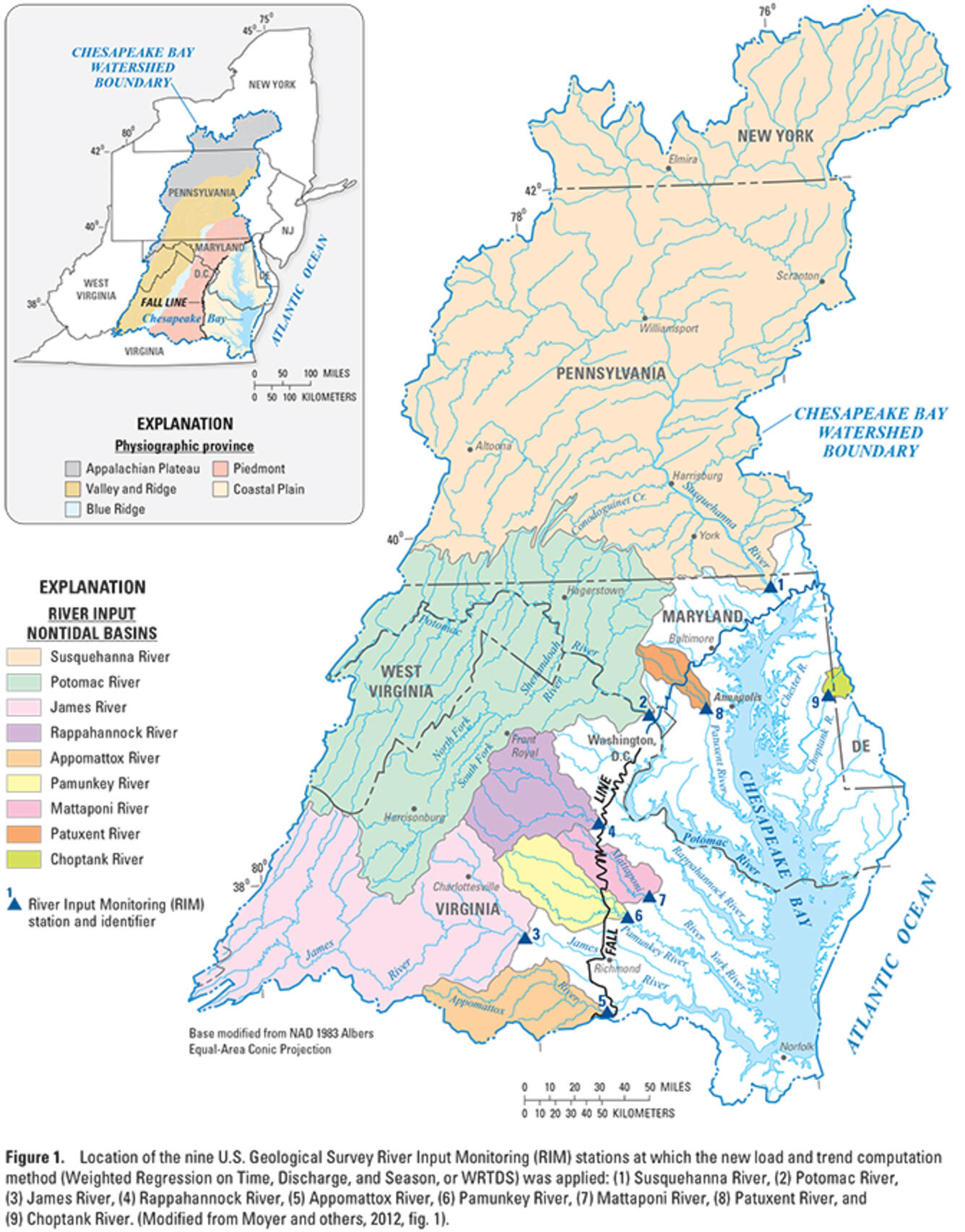 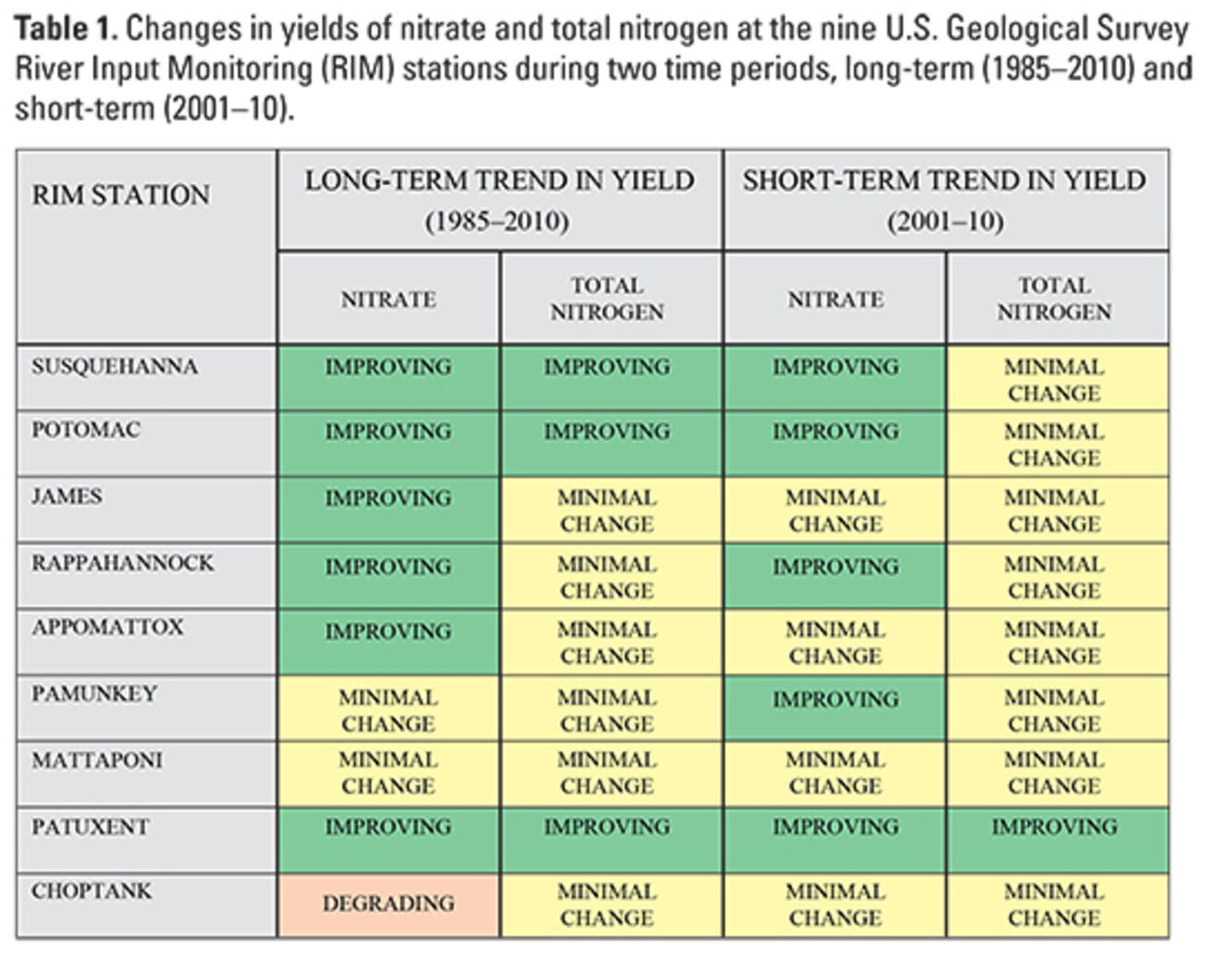 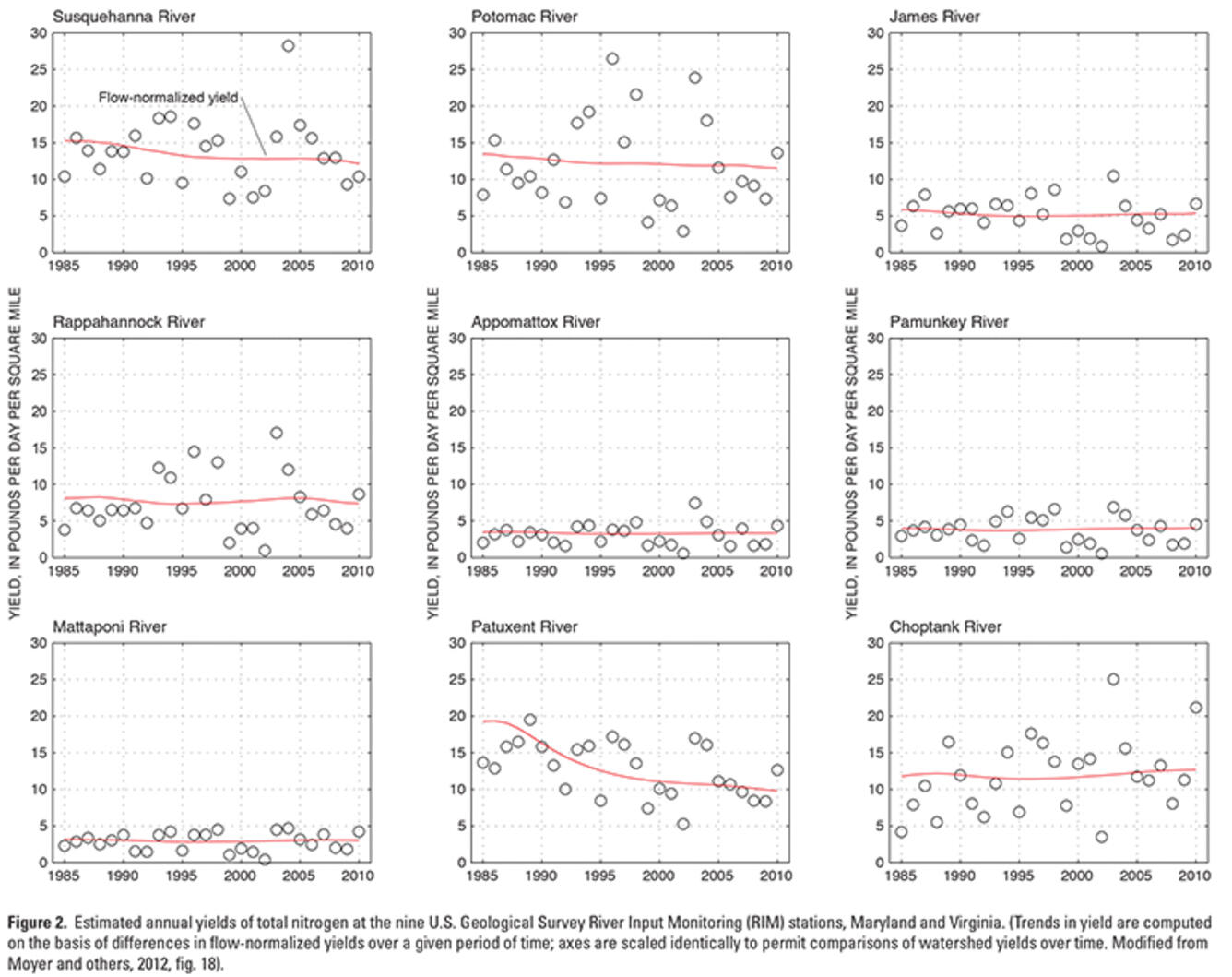 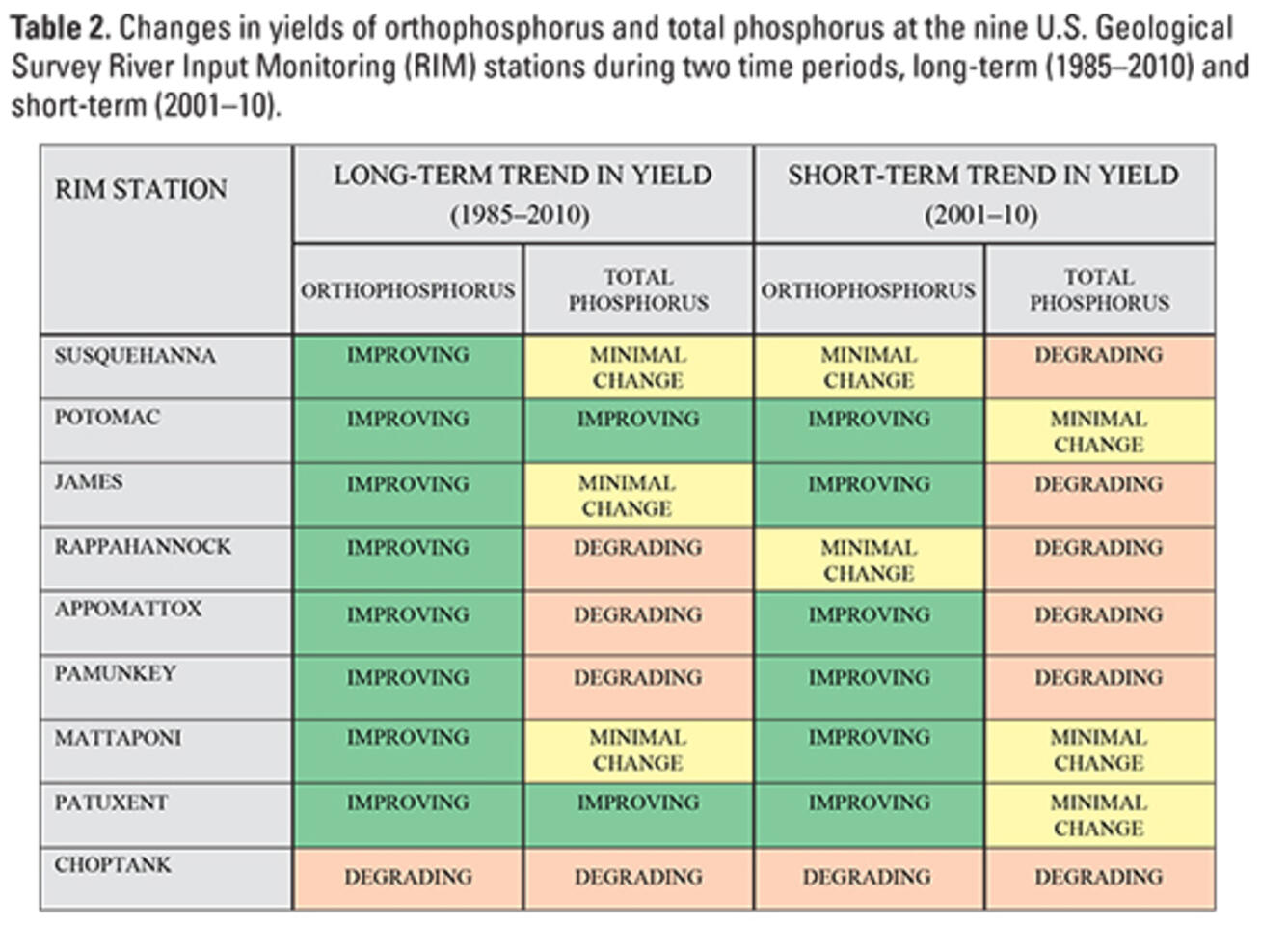 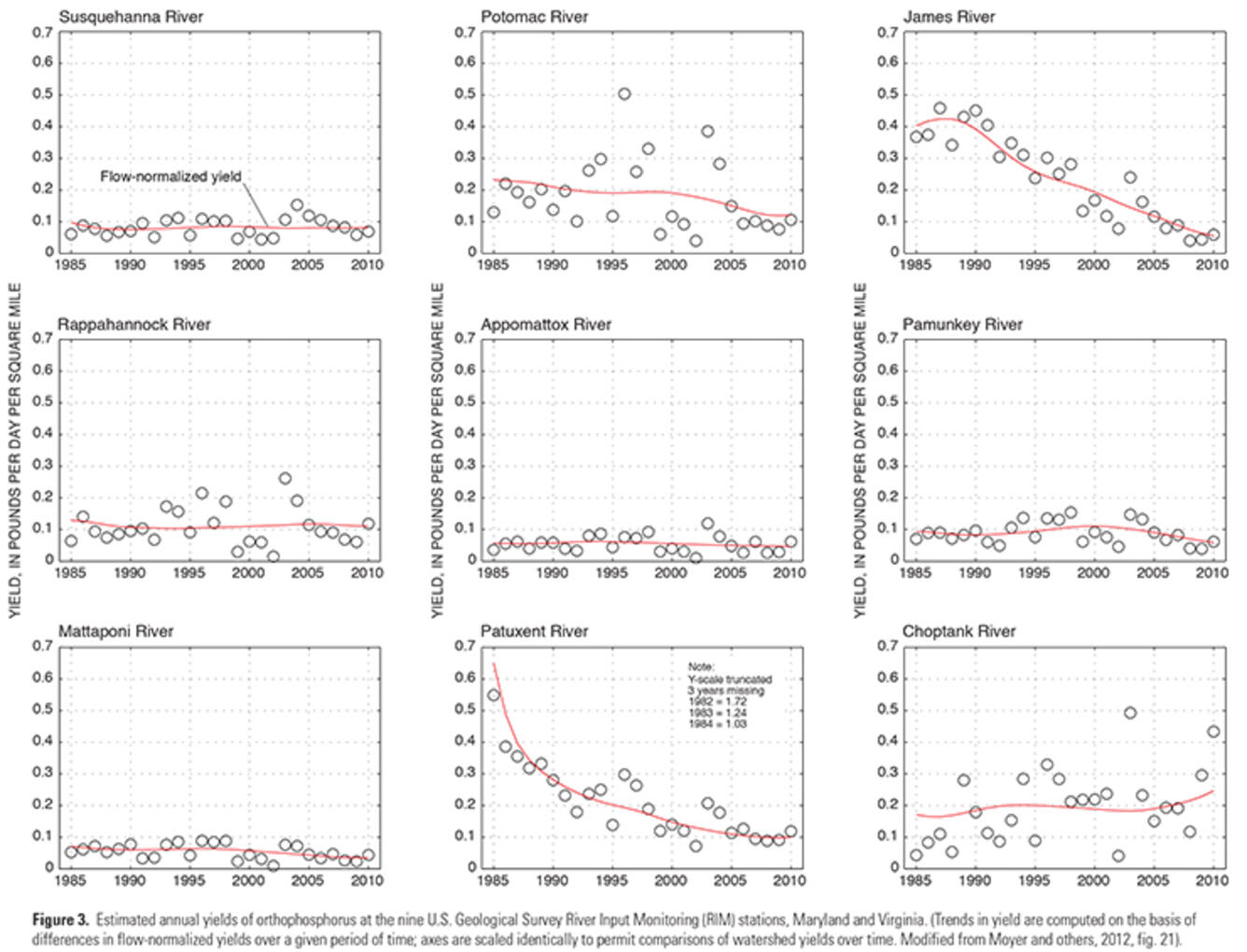 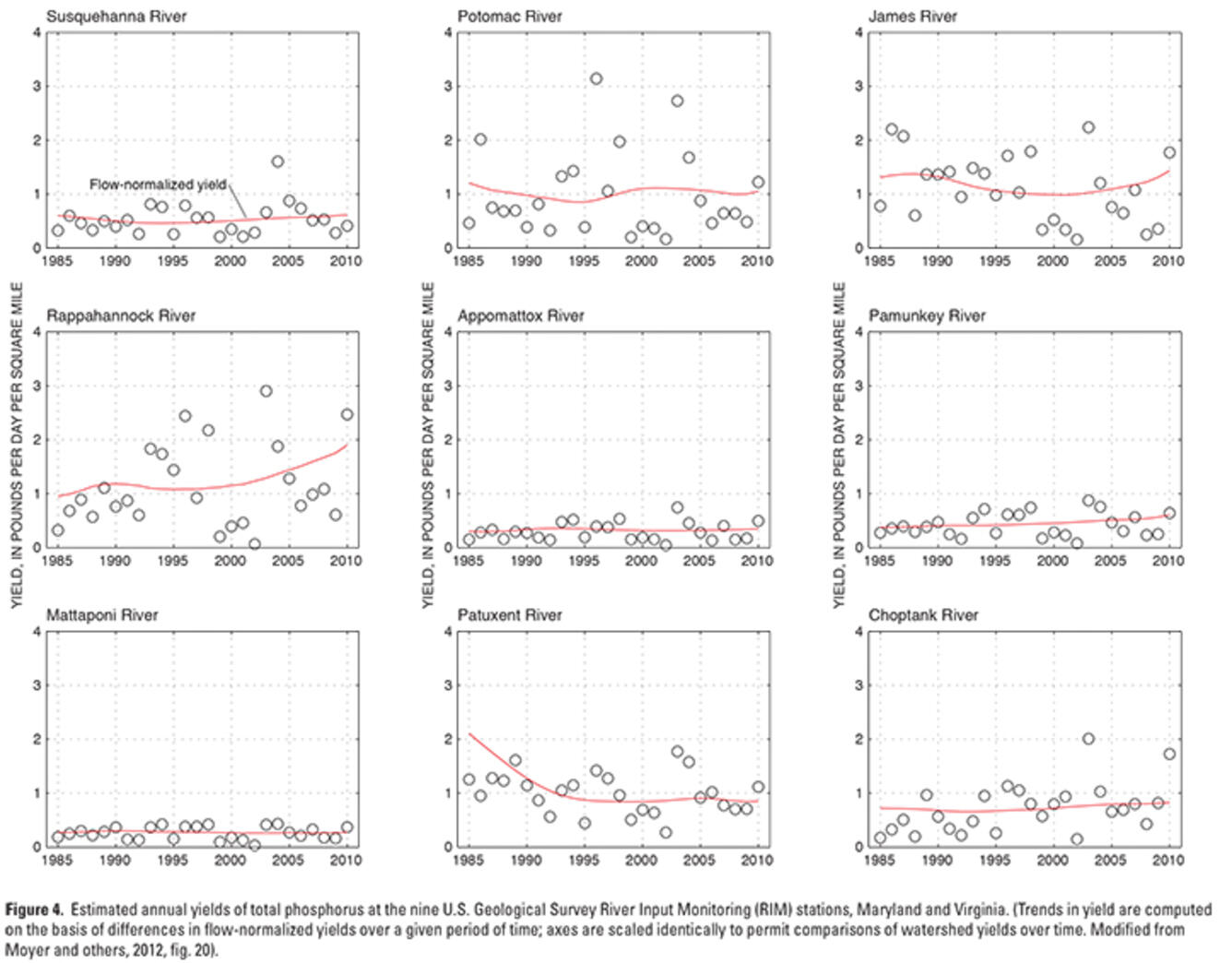 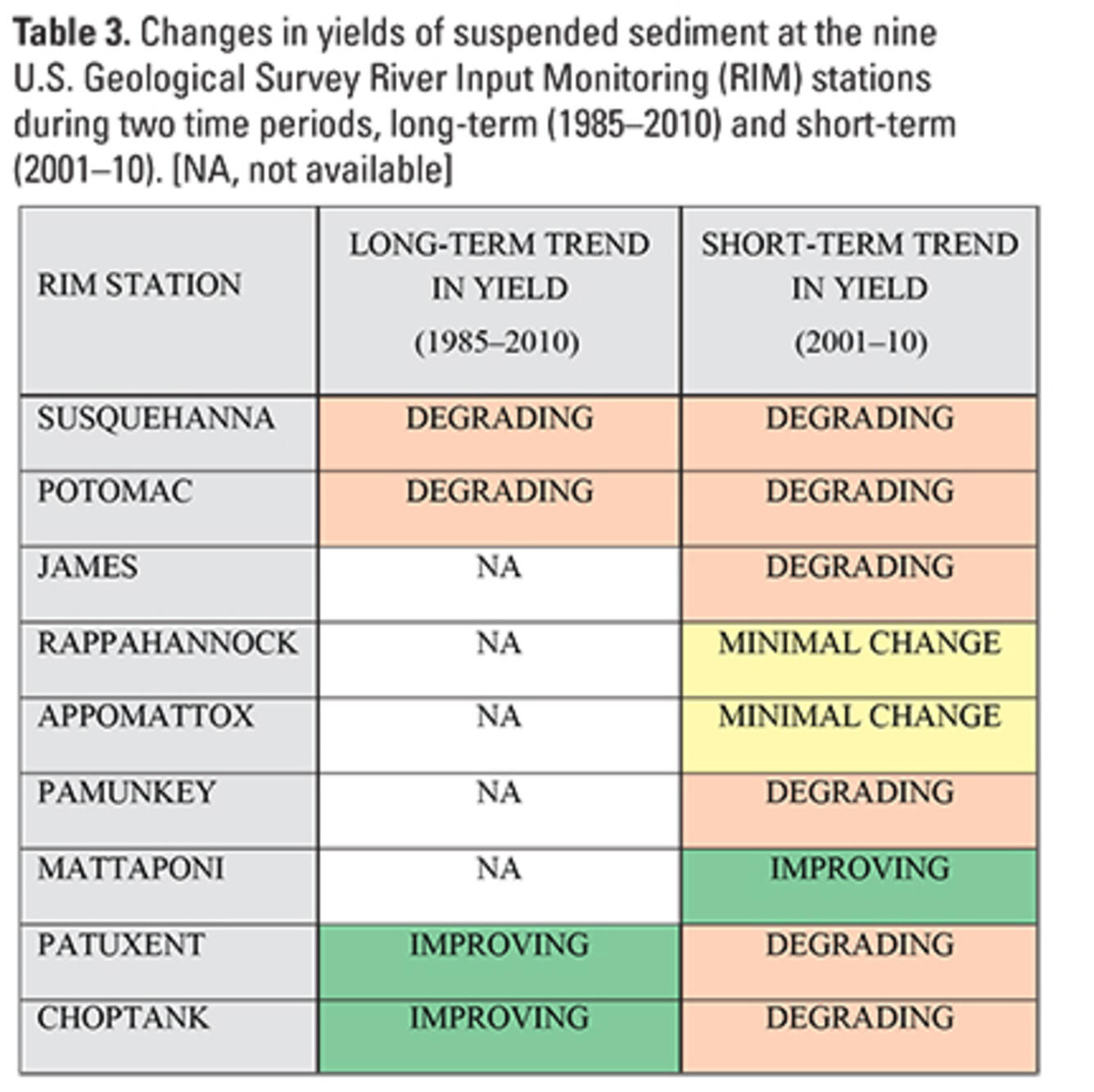 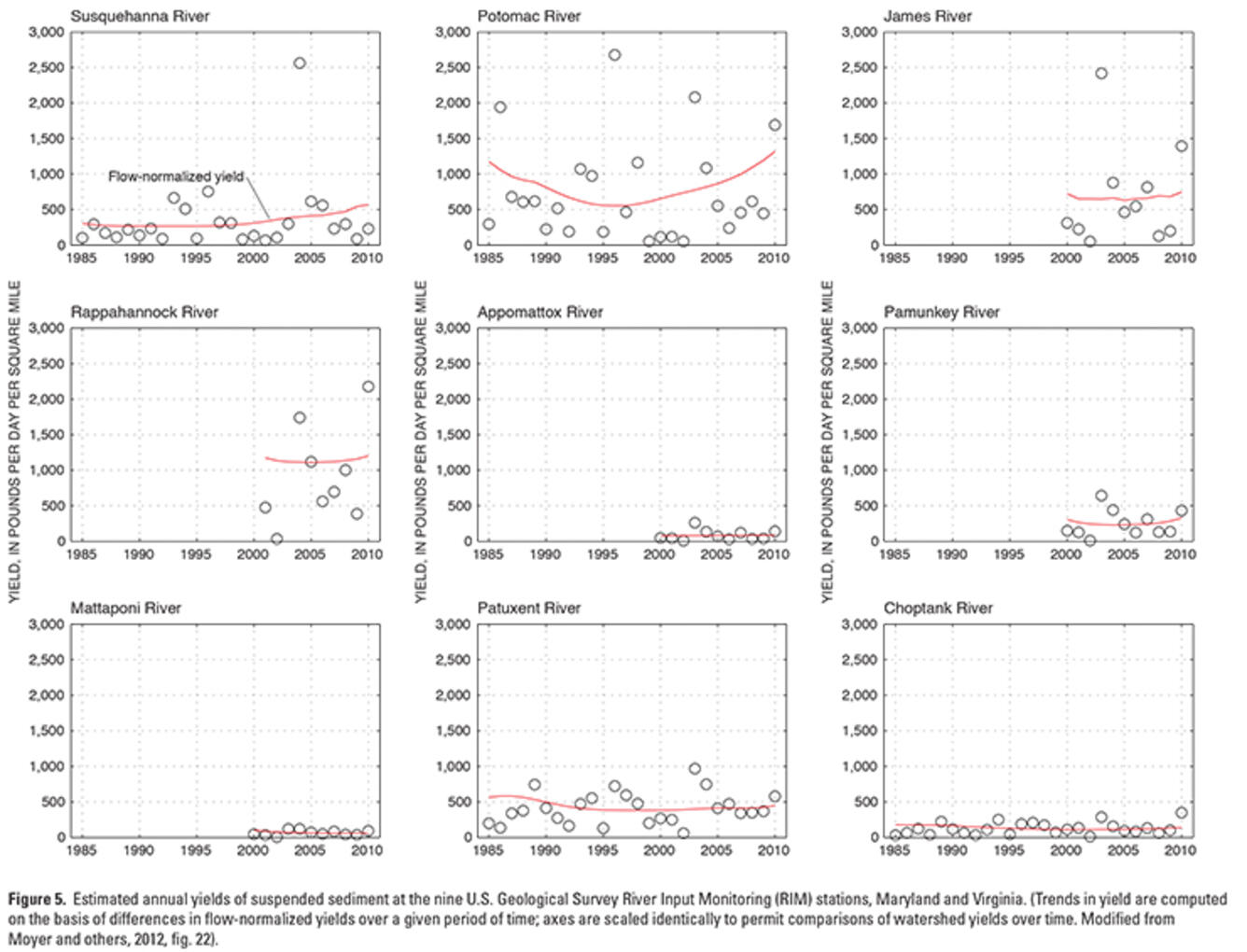 Trends in nutrient and sediment yields are affected by several factors, including implementation of practices to reduce sources, changes in land use, and response time between implementation of practices and water-quality improvements. Although Moyer and others (2012) did not examine these factors, some of the possible causes of trends that will be explored in future studies are discussed below.

Nitrogen: Some possible reasons for the changes in nitrogen yield that will be explored include upgrades made to WWTPs, practices designed to reduce the effects of fertilizer and manure, and reductions in air emissions. Additionally, more information is needed to examine the changes in land use that affect the amount of nitrogen entering the rivers. Response time for water-quality improvements (time between implementing practices and observation of measurable effects on water quality) also could affect the trends. Water-quality improvements resulting from WWTP upgrades or from practices that reduce the runoff of nitrogen to streams can be relatively rapid (Phillips and Lindsey, 2003) and are possible reasons for the improvement in nitrate yields at the majority of the RIM sites. Some of the nitrogen applied in the watershed, however, travels through groundwater and can take years to decades to reach the streams (Sanford and others, 2012; Lindsey and others, 2003). Additionally, some of the nitrogen load (typically less than 50 percent) is attached to sediment. Decades or more may be required for this sediment to travel through the watershed to the bay (Langland and Cronin, 2003). Therefore, the improvement associated with water-quality-management practices can be much slower for the portion of nitrogen that is transported by groundwater or associated with sediment. These are some of the possible reasons for the minimal changes in total nitrogen yield observed at the majority of the RIM sites.

Phosphorus: Possible causes of trends in phosphorus yield (both orthophosphorus and total phosphorus) that will be explored include implementation of water-quality-management practices, response times, and changes in land use.

Sediment: Less is known about the possible factors affecting trends in sediment yield. Sediment and associated phosphorus can be trapped in reservoirs, which affect their movement. In a recent USGS study, Hirsch (2012) reported that loads of sediment and phosphorus from the Susquehanna River to the bay have increased since 1996 because Conowingo Dam is filling with sediment. Consequently, the reservoir has lost some of its capacity to trap sediment and associated phosphorus. As mentioned in the phosphorus discussion above, when a watershed undergoes urban development, the increase in impervious surface area can cause an increase in runoff, leading to erosion of sediment and, ultimately, degrading water-quality conditions. The sediment can be stored in streams and subsequently eroded and transported during storm events. The time required for sediment to travel through the watershed to the RIM stations can be decades or longer, however, depending on the size of the basin and the proportion of floodplains and wetlands it contains. The long travel time can lead to a slow response between the implementation of water-quality-management practices and the detection of water-quality improvements.

Additional information on the TMDL can be found at http://www.epa.gov/chesapeakebaytmdl/.