The hydrologic pathways for nutrients have important implications for the lag time between implementing management actions and detecting water-quality changes in surface water. Previous USGS studies documented that on average, just over 50 percent of the total volume of water in streams is from ground water, with a range of 16 to 92 percent for different streams (Bachman and others, 1998). Estimates of the amount of nitrogen delivered to a stream through ground water range from 17 to 80 percent, with an average of 48 percent (Bachman and others, 1998). Additional analysis by Sprague and others (2000) found similar percentages (15 to 65) of total nitrogen in streams from nitrate contributed through ground water. This chapter summarizes USGS findings about the factors affecting the occurrence and residence time of nitrogen in ground water and its discharge to streams.

The presence of nitrogen in ground water, which occurs mostly as nitrate, is related primarily to nutrient application in different land-cover settings and natural factors including rock type and denitrification that also influence the amount of nitrate occurring in ground water and its discharge to streams (Lindsey and others, 2003). Previous USGS studies determined that the average concentration of nitrate in ground water under different types of land cover ranged from about 5.0 mg/L (milligrams per liter) in agricultural areas, to 2.0 mg/L in urban areas, and less than 0.1 mg/L in forested areas (Ator and Ferrari, 1997). Results from USGS collaboration with USEPA to assess ground-water vulnerability to nitrogen (Greene and others, 2005) also were used to assess the spatial distribution of nitrate in ground water. The probability of nitrate concentrations exceeding 3 mg/L in the Mid- Atlantic area is shown in figure 4.1. The probability of nitrate exceeding 3 mg/L is greatest in parts of the Coastal Plain, in the northern part of the Piedmont Physiographic Province, and in the carbonate rocks of the Valley and Ridge. This information is useful for resource managers to better understand where ground-water discharge will more likely affect water-quality change in streams in response to management actions. 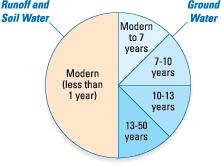 The age of waters being delivered to a stream will be influenced by the relative contribution of surface runoff, soil water, and ground water. Runoff and soil water both have very young ages (hours to months, respectively) and supply, on average, about half of the water to a stream (Phillips and Lindsey, 2003) (fig. 4.2). The remainder of the water supplied to a stream moves through the ground-water system and has a range of modern to over 50 years, with a median age of 10 years. The overall result is that about half of the water entering a typical stream in the Bay watershed can be considered modern, and about 90 percent is less than 15 years old. The relative contribution of surface water, soil water, and ground water will influence the response of the stream to changes in nutrient sources and management actions in a watershed. 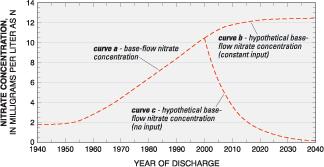 The USGS prepared a ground-water model of the East Mahantango Creek watershed, a predominantly agricultural basin underlain by fractured rock, to predict the change in nitrate concentration in a stream over time (Lindsey and others, 2003). The model used information on the amount of nitrogen applied to the land surface over time in the basin, assumed a ground-water age of about 10 years, and estimated a response of the base-flow (the amount from ground water) nitrate concentrations in a stream (fig. 4.3). The model results indicate that the base-flow nitrate concentration of the stream increased during the last several decades (curve a in fig. 4.3) because of increases in the concentrations discharging from ground water. The increase in nitrogen sources used in the model is typical of many agricultural regions within the Chesapeake Bay watershed. Two future scenarios were examined with the model: (1) continuation of nitrogen applications at current levels, and (2) elimination of all nitrogen applications. The scenario with nitrogen applications at current levels results in a continued increase in concentration of base-flow nitrate in the stream over the next several decades (curve b in fig. 4.3). The scenario with complete elimination of nitrogen applications shows that a 50-percent reduction in nitrate base-flow concentrations could occur in the first 5 years, with a decrease likely to continue until 2040 (curve c in fig. 4.3). Baseflow nitrate concentrations over time in many streams in the Chesapeake Bay watershed likely will be bounded by these two scenarios depending on the amount of nonpoint-source reductions and the relative contribution and age of surface and ground water to a stream. The relative contribution of flows to a stream and their respective ages will influence the lag time between implementation of management actions and improvement in water quality. Streams with a higher portion of surface water and young ground water will have more rapid improvement than streams with higher proportions of ground water of older ages. Knowledge of these differences at local scales can be used to help choose the types of management actions needed and better assess their effectiveness.