Freshwater mussel conservation efforts depend on identifying habitat characteristics that are suitable for mussel reintroduction and restoration. CERC scientists are conducting research to understand how physical habitat dynamics affect the distribution of mussels and suitable habitat in streams and rivers.

The Issue: Freshwater mussels are among the world’s most imperiled species. Mussels are long-lived, sessile benthic organisms that are commonly found in aggregates known as mussel beds. Mussel beds often consist of several species of mussels and multiple generations of each species. These mussel beds can persist at the same location in a river for decades or more. Stability of the sediment within mussel beds is thought to be critical to their survival, yet rivers frequently experience high-discharge events that move large amounts of riverbed sediment.  The need to understand exactly what riverbed instability means to mussel species is essential to reconciling these apparently contradictory views of mussel habitat.

Addressing the Issue: CERC scientists use a multidisciplinary approach to characterize and quantify mussel bed stability and physical habitat conditions. Site bathymetry is mapped (Fig. 1) using RTK-GPS, a single-beam sonar, lidar, and sidescan sonar, and river hydraulics are characterized with an acoustic doppler current profiler. The movement of rocks and mussels in and around mussel beds is monitored using radio frequency identification (RFID) and accelerometer technology to track live mussels, sediment, and surrogate mussels (Fig. 2). This information is used to develop high-resolution habitat maps and hydraulic models, which provide quantitative information on what constitutes suitable mussel habitat. Mussel habitat study locations include the Big, Jacks Fork, Current, Big Piney, and Osage Rivers in Missouri, the Buffalo River in Arkansas, and the Clinch River in Tennessee.

Next Steps: High-resolution habitat maps and hydraulic models will help predict the timing and location of sediment and mussel movement within and around mussel beds, which will be validated by direct observations of movement of rocks and mussels (Fig. 3). This approach will improve understanding of what constitutes suitable mussel habitat and what riverbed instability means to mussel survival, thereby informing optimal locations for mussel restoration and reintroduction efforts. Moreover, the methods and physical habitat characterization developed by CERC scientists will be highly transferable to other rivers with mussel communities and will inform broader mussel conservation strategies.

Broader Implications: While high-resolution habitat maps, hydraulic models, and RFID tracer studies will improve understanding of optimal mussel habitat, these tools can also aid wildlife managers in a number of additional applications. For example, climate change is expected to lead to increases in the frequency and intensity of extreme precipitation and flow events, which may further exacerbate stress on mussel communities. The methods developed by CERC scientists can be applied to better understand how mussels respond to more frequent and intense flow events and help inform mussel conservation strategies in light of a changing climate. Another example is the emergence of environmental DNA (eDNA) as a tool to monitor species distribution and abundance. Hydraulic models developed by CERC scientists are being used to predict the fate and transport of native and endangered freshwater mussel eDNA. Additionally, the tagging and tracking of live mussels provides a robust temporal and spatial dataset for malacologists and can aid in on-going mussel monitoring efforts.

Return to Threatened and Endangered Species 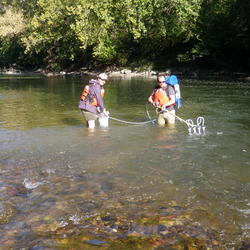 Environmental DNA (eDNA) research at CERC focuses on the development and utility of eDNA tools as well as interpretation of eDNA data in real-world management applications. We work with academic, state, federal and international partners in developing standards and best practices for eDNA technology and exploring the factors that affect eDNA detection in the field. Our lab's eDNA research covers...
By
Columbia Environmental Research Center
link
December 16, 2020

Environmental DNA (eDNA) research at CERC focuses on the development and utility of eDNA tools as well as interpretation of eDNA data in real-world management applications. We work with academic, state, federal and international partners in developing standards and best practices for eDNA technology and exploring the factors that affect eDNA detection in the field. Our lab's eDNA research covers...
Learn More
May 5, 2022

Hydraulic measurements from select reaches of the Big River, Missouri

Hydraulics of freshwater mussel habitat in select reaches of the Big River, Missouri

The Big River is a tributary to the Meramec River in south-central Missouri. It drains an area that has been historically one of the largest lead producers in the world, and associated mine wastes have contaminated sediments in much of the river corridor. This study investigated hydraulic conditions in four study reaches to evaluate the potential contribution of physical habitat dynamics to mechan
By
Ecosystems, Columbia Environmental Research Center
February 4, 2021

The data summarized in this report provide a baseline characterization of the physical attributes of the riverine ecosystems in two landscapes managed by the National Park Service—Ozark National Scenic Riverways, Missouri, and Buffalo National River, Arkansas—to inform understanding and management of aquatic habitat. The study utilized a basin-scale approach and consisted of two components: a basi
By
Ecosystems, Columbia Environmental Research Center