Environmental DNA (eDNA) research at CERC focuses on the development and utility of eDNA tools as well as interpretation of eDNA data in real-world management applications. We work with academic, state, federal and international partners in developing standards and best practices for eDNA technology and exploring the factors that affect eDNA detection in the field. Our lab's eDNA research covers four main topics: (1) invasive species detection; (2) threatened, endangered, or rare species detection; (3) the ecology of eDNA; (4) eDNA applications for environmental toxicology. 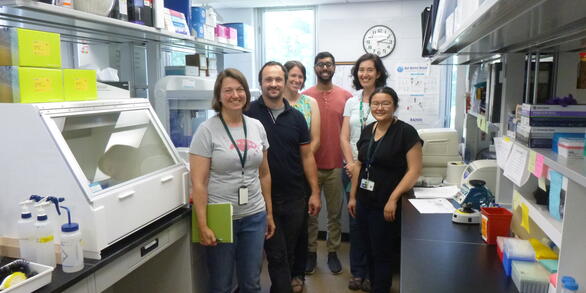 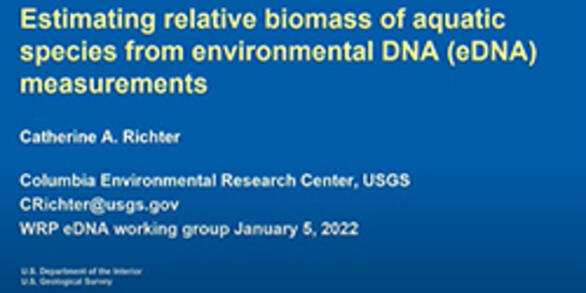 Detecting a non-native species early in its introduction into an ecosystem can increase the success of species removal efforts or improve the management of that species should it become invasive.  Such early detection requires highly sensitive detection methods, and since the seminal work of Ficetola et al. (2008) demonstrating  the use of eDNA for detection of invasive bullfrogs in Europe, eDNA has become a tool in the detection and surveillance of many other invasive species. Our lab works with biologists and wildlife managers on several projects involving invasive species detection with eDNA.

The non-invasive nature of eDNA methods for species detection is a great advantage for monitoring of rare, threatened, or endangered species. Many traditional methods can result in stress to the target organisms and/or alterations to their habitat. Management questions such as definition of extant range, screening for appropriate sites for reintroductions, and monitoring changes in populations following restoration efforts, can all be addressed through eDNA analysis. Our lab studies rare species including the longnose darter, topeka shiner, spectaclecase mussel, and oyster mussel. Video: Darter capture by oyster mussel

The ecology of eDNA is defined by Barnes and Turner (2016) as the interaction between the shed DNA of an organism and its environment. Understanding the factors that influence the origin or shedding of eDNA, the physical state of this DNA, the transport and detection of these molecules in a system and finally the degradation, decay or fate of DNA molecules will improve our ability to interpret eDNA data in the field. Our lab addresses these questions by running laboratory experiments to examine shedding and decay rates for various species. We also work in conjunction with the CERC River Studies hydrology and geomorphology group to examine the fate and detection of eDNA in various aquatic systems.

Pairing eDNA methods for detection of wild organisms in the field with chemical detection of pollutants, testing of toxicity in the laboratory, and new technologies such as landscape use analysis, may lead to a more complete understanding of contaminant effects on fish and wildlife communities. Analysis of eDNA can be used to detect sensitive species, to study biodiversity in the field, and to assess ecosystem function (Zhang, 2019). Monitoring fish and wildlife populations with eDNA can help improve the quality of information gained in ecotoxicology studies and move beyond the single organism scope to community wide effects. Our lab uses metabarcoding to address questions about food web structure and species presence at potentially contaminated sites, including sites near uranium mining activity in the desert southwest United States (Klymus et al. 2017).

Return to Biochemistry and Physiology 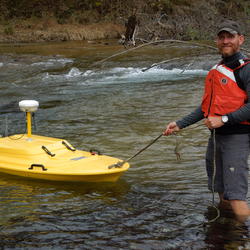 Freshwater mussel conservation efforts depend on identifying habitat characteristics that are suitable for mussel reintroduction and restoration. CERC scientists are conducting research to understand how physical habitat dynamics affect the distribution of mussels and suitable habitat in streams and rivers.
Learn More

The data describe the technical performance of a designed qPCR assay for the detection of mucket (Actinonaias ligamentina) eDNA from field collected water samples. Parameters described include the sequences of the primers and probes used; the limit of detection and limit of quantification for the assay; a list of freshwater mussels species that were used to test specificity of the assay; and in si
By
Ecosystems, Contaminant Biology, Environmental Health Program, Toxic Substances Hydrology, Columbia Environmental Research Center

Freshwater mussels of the order Unionida are a widely distributed taxon that are important in maintaining freshwater ecosystems and are also highly imperiled throughout the world. Monitoring of mussel populations with environmental DNA (eDNA) is an attractive alternative to traditional methods because it is noninvasive and requires less labor and taxonomic knowledge from field personnel. We develo
By
Ecosystems, Contaminant Biology, Environmental Health Program, Toxic Substances Hydrology, Columbia Environmental Research Center
November 5, 2020

New, non-invasive methods for detecting and monitoring species presence are being developed to aid in fisheries and wildlife conservation management. The use of environmental DNA (eDNA) samples for detecting macrobiota is one such group of methods that is rapidly becoming popular and being implemented in national management programs. Here we focus on the development of species-specific targeted as
By
Ecosystems, Contaminant Biology, Environmental Health Program, Toxic Substances Hydrology, Columbia Environmental Research Center
September 16, 2019

Reporting the limits of detection and quantification for environmental DNA assays

BackgroundEnvironmental DNA (eDNA) analysis is increasingly being used to detect the presence and relative abundance of rare species, especially invasive or imperiled aquatic species. The rapid progress in the eDNA field has resulted in numerous studies impacting conservation and management actions. However, standardization of eDNA methods and reporting across the field is yet to be fully establis
By
Ecosystems, Wetland and Aquatic Research Center , Upper Midwest Environmental Sciences Center, Columbia Environmental Research Center