During 1922, flooding occurred throughout much of the Black Hills area from a storm that began on May 10 and produced heavy precipitation (including rain, hail, sleet, and snow in different areas) from west of Edgemont (Cottonwood Creek and Cheyenne River) to west of Belle Fourche (Hay Creek) to Saint Onge to Rapid City.  Flooding of a power plant along the Redwater River was reported as “the highest ever known, being three feet higher than the highest previously known.” A May 22 article in the Weekly Pioneer Times reported “the highest water in the history of” Saint Onge, and numerous articles described widespread flooding in the northern Black Hills area and extending at least as far south as Sturgis.  A severe thunderstorm on August 3, 1922, caused substantial damage to railroad bridges in one of the many large floods along the Fall River.

During 1923, moderately high water occurred along the Belle Fourche and Cheyenne Rivers that extended through 1929 with moderate to substantial flooding along one or both of these rivers.  Flooding in 1924 was especially severe in the Belle Fourche area.  A record peak flow of 22,400 cubic feet per second (ft3/s) occurred on April 9, 1924, at station 06435500 (Belle Fourche River near Belle Fourche).

A stage of 18.0 feet is documented for station 06402500 along Beaver Creek near Buffalo Gap for an unknown date in 1927.  Two people drown in a flood near Hot Springs on June 19, 1927. The stage was determined from information provided by local residents and exceeds a stage of 16.46 feet (associated peak flow is 11,700 ft3/s) that occurred during the first year of operation (1938) of a gaging station at the location. 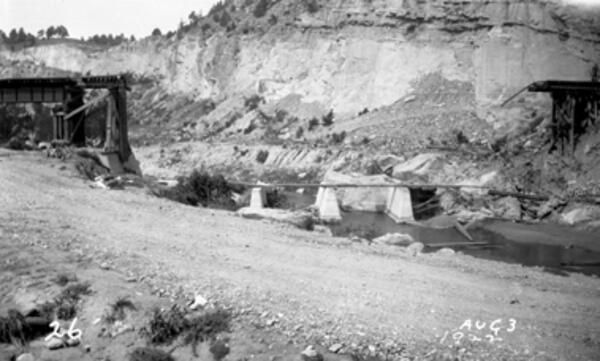