On May 6, 1932, a peak flow of 16,000 cubic feet per second (ft3/s) was recorded at station 06422000 along Rapid Creek at Creston. A very large and powerful storm system occurred throughout a large part of the Black Hills area on May 22–23, 1933.  A tornado occurred between Mystic and Rochford, and severe storm conditions were reported from Custer to Newell.  Lead reported 4.8 inches of precipitation in 12 hours and severe flooding was reported along Spearfish Creek, with additional reports of high water for many other area streams.

Severe flooding occurred in Hot Springs along the Fall River on June 17, 1937, and provided final incentive for Congressional authorization for construction of Cold Brook and Cottonwood Springs Dams, which have regulated flows since 1952 and 1969, respectively. On September 4, 1938, a peak flow of 13,100 ft3/s was recorded during the first year of record for station 06402000.  Also on September 4, 1938, a very large peak flow of 11,700 ft3/s was recorded for station 06402500 along Beaver Creek near Buffalo Gap.  A September 24, 1938, article in the Rapid City Journal reported that flooding on the same date farther north along Lame Johnny Creek “was the worst in 35 years.”  This article provides an indication of an exceptionally heavy storm over a relatively large area that in combination with the known magnitudes of the other two large peak flows probably can be considered as one of the largest known storm and flood events in the Black Hills area. 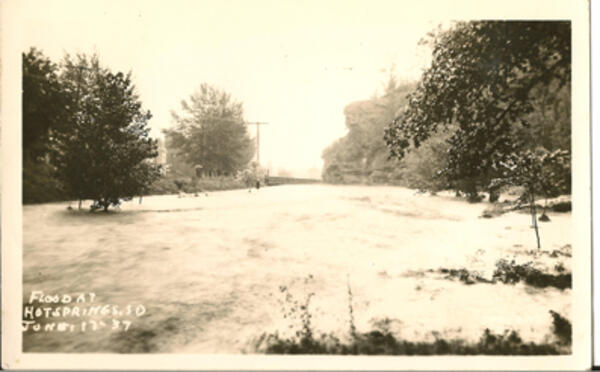