Established in 1903, Wind Cave and the surrounding land became the eighth national park in the United States and the first one created to protect a cave. Wind Cave is located in western South Dakota and is the fifth longest cave in the world with 218 kilometers (km) of accessible passages. Groundwater is an important resource for the park and, in particular, for Wind Cave. Groundwater drips from the ceiling of the cave at numerous locations and exists in ponds, lakes, and streams on the cave floor. The water table of the Madison aquifer is accessible at the deepest part of this cave, where subterranean lakes exist. These lakes are in hydraulic connection with the regionally extensive Madison aquifer, which exists in the northern Great Plains in several States, including South Dakota, North Dakota, Montana, Wyoming, Saskatchewan, and Manitoba. To understand the hydrology and hydrochemistry of Wind Cave, it is essential to understand the surrounding Madison aquifer within which the cave exists.

The objective of this study was to characterize groundwater flow, quality, and mixing in the Wind Cave National Park area. This objective was carried out by assessing or estimating (1) groundwater gradients, flow directions, and transit times; (2) the occurrence and geospatial distributions of arsenic and nitrate and possible associations with trace metals; (3) groundwater sources for Wind Cave and sources of arsenic in the park, and (4) the relative proportions of different source waters contributing to Wind Cave and other areas of interest. 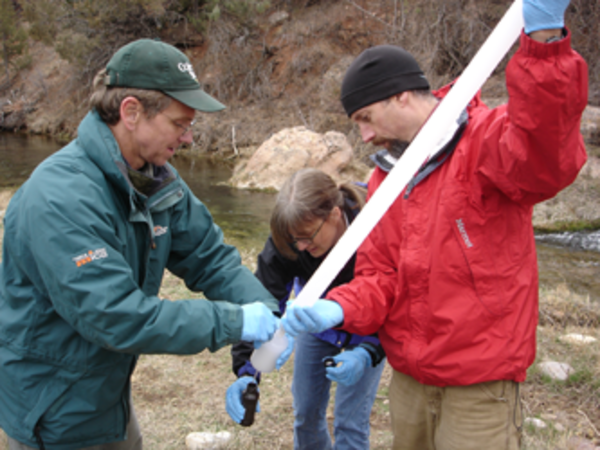 A multivariate statistical method is presented, which includes principal components analysis (PCA) and an end-member mixing model to estimate unknown end-member hydrochemical compositions and the relative mixing proportions of those end members in mixed waters. PCA, together with the Hotelling T2 statistic and a conceptual model of groundwater flow and mixing, was used in selecting samples that be
By
Water Resources, Dakota Water Science Center
June 3, 2012

Principal component analysis (PCA) applied to hydrochemical data has been used with end-member mixing to characterize groundwater flow to a limited extent, but aspects of this approach are unresolved. Previous similar approaches typically have assumed that the extreme-value samples identified by PCA represent end members. The method presented herein is different from previous work in that (1) end
By
Water Resources, Dakota Water Science Center