Information and products on the Souris River Basin.

The Souris River (also known as the Mouse River in the United States) originates in the Yellow Grass Marshes north of Weyburn, Saskatchewan, Canada, and flows southeast, crossing the northern boundary of North Dakota west of Sherwood, North Dakota. The Souris River then forms a loop and flows back north, entering Manitoba, Canada near Westhope, N. Dak., eventually flowing into the Assiniboine River near Brandon, Manitoba. 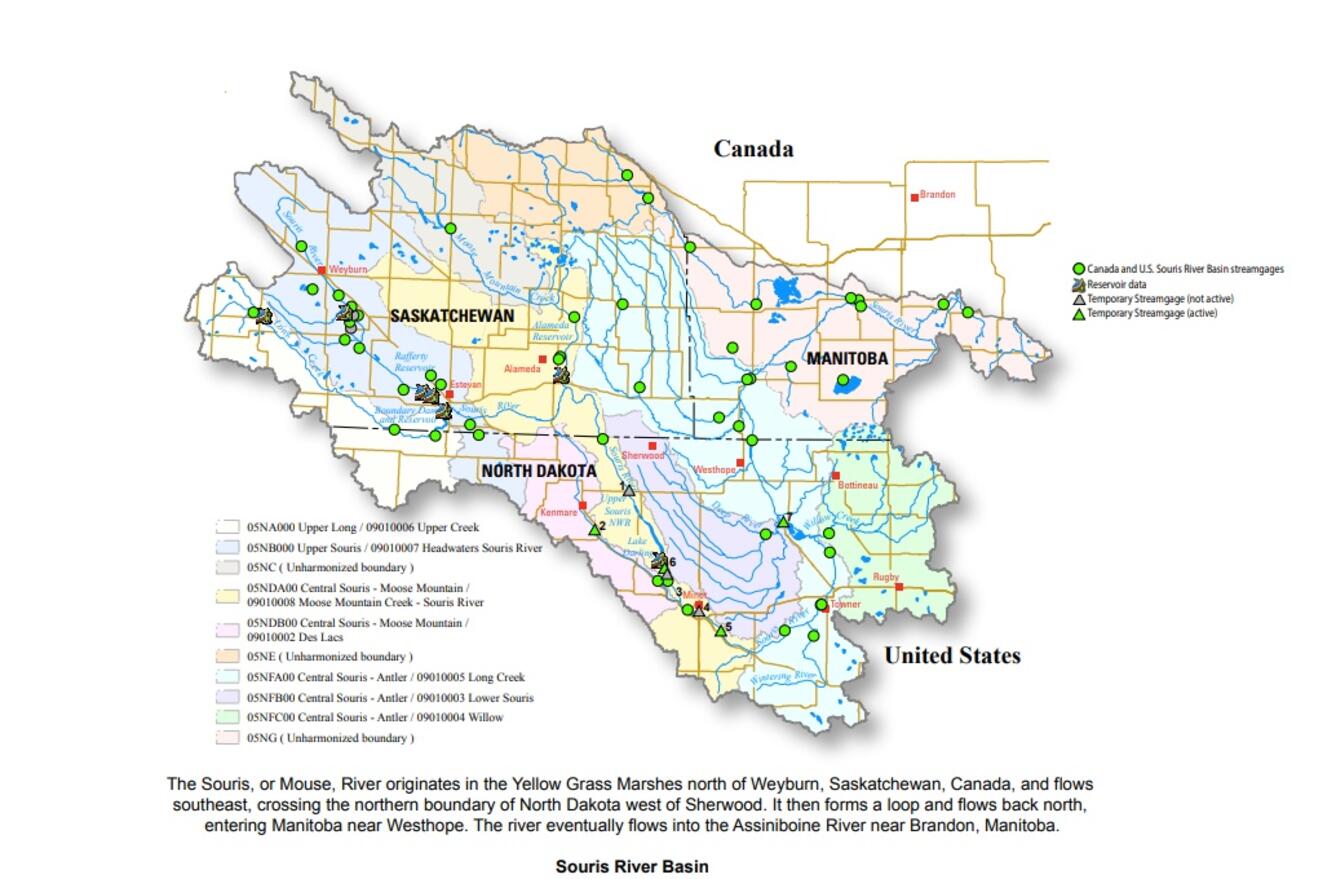 The Souris River Basin is a 24,000 square-mile basin in the Provinces of Saskatchewan and Manitoba in Canada, and the State of North Dakota in the United States. Above-average snowpack during the winter of 2010–11, along with record-setting rains in May and June of 2011, led to record flooding that caused extensive damage to Minot, North Dakota, and numerous smaller communities in Saskatchewan, Ma
By
Dakota Water Science Center
September 28, 2016

The Souris River Basin is a 61,000 square kilometer basin in the provinces of Saskatchewan and Manitoba and the state of North Dakota. Record setting rains in May and June of 2011 led to record flooding with peak annual streamflow values (762 cubic meters per second [m3/s]) more than twice that of any previously recorded peak streamflow and more than five times the estimated 100 year postregulatio
By
Water Resources, Dakota Water Science Center
September 6, 2016

History of U.S. Geological Survey streamgaging on the Souris River in and near Minot, North Dakota, 1903–2016

The U.S. Geological Survey began collecting streamflow data, in cooperation with the North Dakota State Water Commission, on the Souris River in and near Minot, North Dakota, in April 1903. The gage was started up to better understand the water resources available in North Dakota. Currently (2016), water availability is still important as well as the flood monitoring and forecasting that has becom
By
Water Resources, Dakota Water Science Center
April 11, 2016

Historically unprecedented flooding occurred in the Souris River Basin of Saskatchewan, North Dakota and Manitoba in 2011, during a longer term period of wet conditions in the basin. In order to develop a model of future flows, there is a need to evaluate effects of past multidecadal climate variability and/or possible climate change on precipitation. In this study, tree-ring chronologies and hist
By
Water Resources, Dakota Water Science Center
February 24, 2016

The Souris River Basin is a 61,000-square-kilometer basin in the Provinces of Saskatchewan and Manitoba and the State of North Dakota. In May and June of 2011, record-setting rains were seen in the headwater areas of the basin. Emergency spillways of major reservoirs were discharging at full or nearly full capacity, and extensive flooding was seen in numerous downstream communities. To determine t
By
Water Resources, Dakota Water Science Center