A Rocky Mountain drive might alarm people whisking past the once-healthy evergreens that now stand gray and naked. It might seem like all the trees died and the forest is in dire jeopardy.

Stepping into the trees for a closer look can reveal part of their complex story of life and death. And though that story revolves around an insect just a quarter of an inch long, satellite imagery taken 438 miles above the Earth can tell another part of it.

Remote sensing researchers like Dr. Sarah Hart, a forest ecologist at Colorado State University, try to interpret that story for those who tend to the forests, live near them—or just happen to drive by.

Hart, who also studies wildfire, found herself drawn to research involving bark beetles when, as a master’s student, she flew out of British Columbia during a severe mountain pine beetle outbreak and saw striking numbers of dead lodgepole pines, most bearing rust-colored needles that would later drop off.

“I wondered why this was happening and how frequently this has happened in the past,” Hart said.

She has found answers to some of her questions since then. In the process, she has come to view Landsat as a key part of examining the remote areas of the Rocky Mountains.

The Landsat program, a joint effort by the U.S. Geological Survey (USGS) and National Aeronautics and Space Administration (NASA), just launched its ninth satellite dedicated to observing the Earth’s land surface. Nearly 50 years of Landsat data are processed, stored, and distributed from the USGS Earth Resources Observation and Science (EROS) Center. Between the two Landsat satellites in orbit at once, every part of Earth is captured every eight days at a resolution of 30 meters per pixel.

Hart also uses data from aerial detection surveys, during which observers fly over and digitally label areas affected by insects and disease. But for consistency, scale, and length of record, she turns to Landsat.

“Bark beetle outbreaks unfold over several years to a decade in some areas. So the temporal record of Landsat was really critical. It’s the perfect tool, and really the only tool that, in my opinion, would have solved and answered some of the questions that we were interested in,” she said.

Hart served as a collaborator on a recent bark beetle study by Dr. Kyle Rodman, who did postdoctoral research with Hart and now works as a research scientist at the Ecological Restoration Institute at Northern Arizona University. Rodman grew up in Colorado Springs, and that familiarity has influenced his interest in forest disturbances.

“I think you can do a lot of important and useful things if you know an area well, if you have that good understanding of what’s going on on the ground,” Rodman said. “As a remote sensing person, knowing what you’re seeing on the landscape is really valuable.”

Rodman and his collaborators used Landsat data from 1996 to 2019 as the basis for modeling, mapping, and predicting the presence and severity of tree mortality caused by bark beetles in the subalpine forests of the southern Rocky Mountains.

Belonging to several native species, these beetles are about the size of a single grain of rice. Typically bark beetles attack weakened trees, whose defenses they can overcome by relying on mass-attack strategy, where beetles emit pheromones that call other beetles to the tree. Bark beetles feed upon the inner bark tissues, and extensive colonization cuts off the flow of nutrients and water, ultimately leading to the tree’s death.

“These outbreaks historically have happened about once every 70 to 100 years here in Colorado,” Hart said. “These are native species that have evolved with these conifer species over millennia.”

However, drought and warmer temperatures have the potential to help beetle populations flourish and to stress otherwise healthy trees, lower their defenses, and make them more susceptible to attack. Studies like this help researchers and land managers understand the implications of outbreak patterns and what the future may hold for forests.

This study, where Landsat helped to quantify the spectral changes indicative of tree death, captured severe outbreaks of mountain pine beetles that started in the mid-1990s and of spruce beetles that started in the mid-2000s. Among its findings: Nearly 40% of the study area, more than 10,000 km², had experienced tree mortality caused by bark beetles in the given time frame; and areas of near-total mortality, 90% or greater, were relatively small and isolated—in fact, “a lot smaller than we were expecting,” Rodman said.

Hart said she was more surprised than she should have been. “We as humans bias ourselves to observing the things that are different than they were perhaps 10 years ago. So, my scientist brain was saying, ‘Everything we know about disturbances suggests that patches are often not that big.’ … But my observational brain as a human was like, ‘There’s dead trees everywhere!’ The work that Kyle did was pretty interesting to see that, yeah, I should have listened to the scientist brain.”

If all the trees in an area of forest are larger and older and, therefore, most attractive to bark beetles, an outbreak could wipe out a high percentage. With a mix of larger trees with smaller, younger trees, however, lower mortality would be expected. After an attack kills the older trees, that area should be less susceptible to another outbreak for perhaps several decades.

The forest makeup could influence carbon storage as well, said Dr. Zhiliang Zhu, who has worked with Landsat, remote sensing, and land cover at USGS EROS and the USDA Forest Service and now conducts USGS research on biologic carbon sequestration.

Forests aren’t necessarily disappearing from bark beetle outbreaks, but they are sometimes shifting in composition as they recover, Rodman said—to a younger stand of the same species or another species altogether. The footprint of the spruce beetle outbreak differed from the last outbreak in the 1940s because other types of trees had filled the void, Hart said.

Knowing the areas of high mortality and low mortality can help create a “landscape template for disturbances that may happen in the future,” Hart said.

It’s also “hugely beneficial for thinking about things like wildlife habitat, where certain species of wildlife tend to use different kinds of habitat structures and tend to prefer either dead forests or live forests,” Rodman said. “You can start to do things like conserve those species in a more effective way because you know what’s on the landscape and how that is changing over time.”

Bark beetle outbreaks may be natural, but they still affect people in ways beyond aesthetic that make it important to know when they’re happening, where they’re happening, what effect they’re having, and what might happen in the future. Dead trees can pose a hazard if branches or trunks fall on roadways, campgrounds, and other inhabited areas. Beneficially, though, the dead wood in those areas can be turned into useful products.

Meanwhile, Zhu said, forest managers wonder: Should they harvest infested trees? If they don’t, will the forest be a fire hazard?

Remote sensing researchers are better poised today to try to identify answers from data, including models that use Landsat to show spectral characteristics and landcover change, he said.

“Those will help make mapping and characterizing ecosystem disturbances much more accurate and faster than ever before,” Zhu said.

That should be of great benefit where climate change and beetle infestations intersect—when changes happen, as Hart puts it, “both slowly but also quickly.”

Hear a podcast on Landsat and mountain pine beetles! 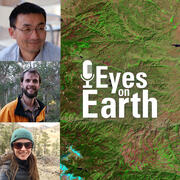 Outbreaks of native bark beetles can lead to conspicuous changes in a forest landscape. They’ve been present for thousands of years with occasional outbreaks, but there’s a lot we don’t yet understand about them. Exactly when and where have outbreaks occurred? How severe were they? What happened to the forest afterward?