Solar and wind power development is increasing exponentially in the United States. However, these energy sources may affect wildlife, either directly from collisions with the turbine blades or photovoltaic arrays or indirectly from loss of habitat and migration routes. An important component to understanding the effects of these renewable energy projects on wildlife is accurate and precise estimates of fatality.

Current protocols for estimating bird and bat fatality at wind-power facilities is to search designated areas below turbines to find carcasses. Carcasses may be scavenged or difficult to detect, so statistical tools and search protocols are available to estimate actual fatality. However, current estimators only adjust the observed number of carcasses found on search plots for scavenger removal, search efficiency and time between searches, not for variation in plot size among studies nor portion of the plot actually searched. Simple counts of carcasses found at wind farms also do not reflect actual fatalities because some are removed by scavengers, or are overlooked by or fall within areas inaccessible to searchers. Because the density of carcasses generally declines with distance from the turbine, the location and configuration of inaccessible areas can greatly affect the proportion of carcasses that might be missed.

Solar energy development can present several different sources of mortality to wildlife, especially birds. Estimates of the total birds killed at an entire facility must consider each of the various sources of fatality in order to be accurate. Monitoring and estimation tools similar to those available for wind energy facilities are in short supply.

Biological Statistician Manuela Huso, along with her colleage Dan Dalthorp, lead the USGS in developing more accurate fatality detection tools and monitoring protocols to assist both the solar and wind energy industry and the agencies that regulate their development and operations.

Explore the library of USGS Tools for Solar and Wind Energy Development and Operations.

An important measure of the impact of renewable energy development on wildlife is direct mortality, but accurately estimating it is difficult when mortality takes place over an extended period of time, and probability of discovery of fatalities varies greatly. Over the past decade several new estimators have been developed, each contributing some improvement over the previous ones but also causing confusion among practitioners regarding which estimator to use when, and how the estimators differ. With support from federal and private agencies, USGS statisticians brought together the developers of these different estimators to collaborate on a single accurate estimator of mortality and its associated uncertainty. Accurate mortality estimates are fundamental to understanding acute and cumulative effects of renewable energy development on wildlife populations. GenEst is an open source R-package, available for Windows, Mac, and Linux, with both GUI and command line implementations and includes example datasets.

GenEst - Software for a Generalized Estimator of Mortality

GenEst User Guide—Software for a Generalized Estimator of Mortality

GenEst Training Workshops are scheduled at several locations around the U.S. For more information on GenEst and 2019 training workshops, click here. 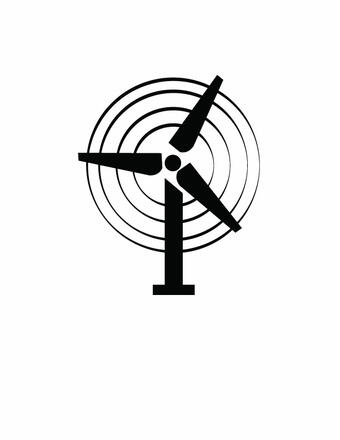 A software tool used to estimate the possible number of bird and bat fatalities at wind farms when few or even zero carcasses are found. An accompanying user guide describes the underlying statistical models and contains step-by-step instructions that walk users through the calculations and interpretations of results. Version 1.0 also offers guidance in designing monitoring studies and contains step-by-step instructions that walk managers through calculations and help with interpretations of results. A training video is also available.

USGS scientists developed statistical tools to help wildlife managers and wind energy operators infer whether incidental wildlife take levels are consistent with, higher than, or lower than permitted levels, over both short-term and long-term time scales. The tools examine the accuracy of the triggers that signal wind energy companies to undertake actions to remain within allowed take rates.

Accurate estimates of wildlife fatality at wind-power facilities are critical for predicting potential fatality prior to construction, developing techniques to reduce fatalities, and assessing cumulative effects on wildlife populations. New software and a user’s guide were designed to provide estimates that are accurate and unbiased.

Federal researchers reviewed currently used methods to estimate bird and bat fatality rates at wind power facilities, and discussed the role of these estimates in determining minimization and mitigation impacts to species of concern. Using appropriate monitoring protocols and an unbiased estimator on statistically selected sites may help evaluate the cumulative effect of wind power development on wildlife at national or regional scales.

USGS scientists developed a method to statistically determine how many animals may have been killed from collisions with wind turbines based on surveys for wildlife carcasses beneath the turbines. Wildlife managers can use the method to design monitoring protocols and to determine whether a zero count really means “zero killed” or “none found.”

Accurate counts of wildlife mortalities from collisions with man-made structures can be difficult because carcasses may not be detected or may be scavenged. An international team of researchers devised software to estimate wildlife mortality from the number of carcasses found and the probability that an animal that has died from a collision is found. 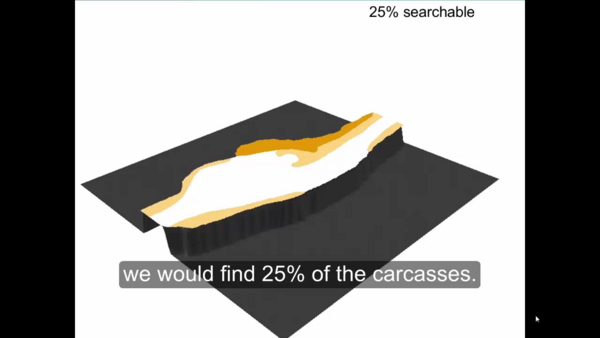 If a publication is not available online, we may be able to provide you with a reprint by request. Please send an email to fresc_outreach@usgs.gov and include the citation for the publication of interest.

Executive SummaryWe evaluate three approaches to accounting for incidental carcasses when estimating an upper bound on total mortality (𝑀) as 𝑀∗ using the Evidence of Absence model (EoA; Dalthorp and others, 2017) to assess compliance with an Incidental Take Permit (ITP) (Dalthorp & Huso, 2015) under a monitoring protocol that includes formal, dedicated carcass surveys that achieve an overall dete
By
Ecosystems, Forest and Rangeland Ecosystem Science Center
November 19, 2019

We develop a novel method of estimating population size from imperfectly detected counts of individuals and a separate estimate of detection probability. Observed counts are separated into classes within which detection probability is assumed constant. Within a detection class, counts are modeled as a single binomial observation X with success probability p where the goal is to estimate index N. W
By
Ecosystems, Forest and Rangeland Ecosystem Science Center
November 7, 2018

GenEst user guide—Software for a generalized estimator of mortality

GenEst (Generalized Estimator) is a software tool for estimating the total number of individuals arriving in an area during a specific time period when their detection probability is unknown but estimable. Its development was motivated by the need to accurately estimate the total number of bird and bat fatalities occurring at wind and solar energy facilities, but it is applicable in a variety of o
By
Ecosystems, Forest and Rangeland Ecosystem Science Center
November 7, 2018

IntroductionGenEst (a generalized estimator of mortality) is a suite of statistical models and software tools for generalized mortality estimation. It was specifically designed for estimating the number of bird and bat fatalities at solar and wind power facilities, but both the software (Dalthorp and others, 2018) and the underlying statistical models are general enough to be useful in various sit
By
Ecosystems, Forest and Rangeland Ecosystem Science Center
July 5, 2017

Evidence of Absence software (EoA) is a user-friendly software application for estimating bird and bat fatalities at wind farms and for designing search protocols. The software is particularly useful in addressing whether the number of fatalities is below a given threshold and what search parameters are needed to give assurance that thresholds were not exceeded. The software also includes tools (1
By
Ecosystems, Energy & Wildlife, Forest and Rangeland Ecosystem Science Center
March 31, 2017

IntroductionSolar power represents an important and rapidly expanding component of the renewable energy portfolio of the United States (Lovich and Ennen, 2011; Hernandez and others, 2014). Understanding the impacts of renewable energy development on wildlife is a priority for the U.S. Fish and Wildlife Service (FWS) in compliance with Department of Interior Order No. 3285 (U.S. Department of the I
By
Ecosystems, Energy & Wildlife, Forest and Rangeland Ecosystem Science Center
May 16, 2016

Monitoring fatalities at wind energy facilities after they have been constructed can provide valuable information regarding impacts of wind power development on wildlife. The objective of this monitoring is to estimate abundance of a super-population of carcasses that entered the area within a designated period of time. By definition, the population is not closed and carcasses can enter as they ar
By
Ecosystems, Energy & Wildlife, Forest and Rangeland Ecosystem Science Center
December 2, 2015

Introduction The U.S. Fish and Wildlife Service (USFWS) has begun to issue incidental take permits (ITPs) to wind power companies to allow limited take of bird and bat species that are protected under the Endangered Species Act, the Bald and Golden Eagle Protection Act, or the Migratory Bird Treaty Act (Huso and others, 2015). Expected take rates are determined using scientifically based collision
By
Ecosystems, Energy & Wildlife, Forest and Rangeland Ecosystem Science Center
July 22, 2015

Many wind-power facilities in the United States have established effective monitoring programs to determine turbine-caused fatality rates of birds and bats, but estimating the number of fatalities of rare species poses special difficulties. The loss of even small numbers of individuals may adversely affect fragile populations, but typically, few (if any) carcasses are observed during monitoring. I
By
Ecosystems, Energy & Wildlife, Forest and Rangeland Ecosystem Science Center
January 15, 2015

This article is a tutorial for the R-package carcass. It starts with a short overview of common methods used to estimate mortality based on carcass searches. Then, it guides step by step through a simple example. First, the proportion of animals that fall into the search area is estimated. Second, carcass persistence time is estimated based on experimental data. Third, searcher efficiency is estim
By
Ecosystems, Energy & Wildlife, Forest and Rangeland Ecosystem Science Center
September 19, 2014

Evidence of Absence software (EoA) is a user-friendly application used for estimating bird and bat fatalities at wind farms and designing search protocols. The software is particularly useful in addressing whether the number of fatalities has exceeded a given threshold and what search parameters are needed to give assurance that thresholds were not exceeded. The software is applicable even when ze
By
Forest and Rangeland Ecosystem Science Center