In Australia, between 1852 and 2011, at least 951 people were killed by floods, another 1,326 were injured, and the cost of damage reached nearly $5 billion dollars. More recently, the southeast Queensland floods during the 2010–11 season left much devastation, destroying 75 percent of the banana crop and, as a result, inflating banana prices (Carbone and Hanson, 2013). Floods have devastated communities and negatively impacted the regional and national economies in Australia. Landsat imagery, in conjunction with MODIS and several other commercially acquired satellites, has been used to map flood extent to provide situational-awareness information to emergency services in order to save lives and mitigate economic impact.

During June 2007, the Gippsland region in southeastern Victoria experienced heavy rainfall and widespread flooding. Geoscience Australia used Landsat 5 satellite images of the area around Bairnsdale and Sale, acquired two weeks before the heavy rains and then around the flood peak, to determine the extent of flooding (Thankappan, 2007). Visual comparison of a Landsat image acquired on June 13, before the flood, with an image taken on June 29, showed the inundated areas clearly (fig. 1A and B). In the first image, the Mitchell River is a thin, meandering black line flowing into Lake King, while the second image shows the inundation of areas around Bairnsdale, as well as the Mitchell River breaching its banks (Thankappan, 2007). Geoscience Australia provided the map of surface water extent derived from satellite images (fig. 1C) to the State Emergency Services in Victoria for their assessment and use. Feedback indicated that the satellite-derived information complemented local information available to emergency managers during the disaster. Information on flood extents is invaluable for emergency authorities involved in flood recovery and damage assessment. Prompt delivery of such information to emergency managers helps them prioritize their response activities. This enables flood managers to save more lives while spending less money and time on identifying flood extent (Thankappan, 2007).

During the 2010–11 flooding of Queensland and New South Wales, Geoscience Australia provided over 100 Landsat images to and derived flood extent products for the Queensland Department of Community Safety and related emergency services. Landsat data was used to help plan access to flooded regions, sites for food and medical supply stations, and to help assess the progress of floods as they moved across inland floodplains. The resulting data were used to determine the extents of several flood plains and the locations of water diversion structures (Norman Mueller, Geoscience Australia, written commun., 2013).

Carbone, Delana, and Hanson, Jenna, 2013, The worst floods in Australian history: Australian Geographic, accessed on May 16, 2013 at http://www.australiangeographic.com.au/journal/the-worst-floods-in-australian-history.htm. 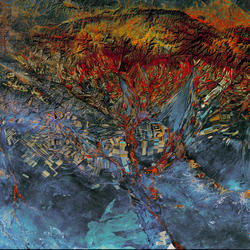 Having access to Landsat imagery provides the irreplaceable opportunity to observe landscape change on a long-term and global scale. These featured case studies demonstrate the value of Landsat imagery by providing specific examples of how people around the world are using the data to answer meaningful questions.
By
Fort Collins Science Center
link
August 10, 2016

Having access to Landsat imagery provides the irreplaceable opportunity to observe landscape change on a long-term and global scale. These featured case studies demonstrate the value of Landsat imagery by providing specific examples of how people around the world are using the data to answer meaningful questions.
Learn More