In areas adjacent to the Delta-Mendota Canal (DMC), extensive groundwater withdrawal from the San Joaquin Valley aquifer system has caused areas of the ground to sink as much as 10 feet, a process known as land subsidence. This could result in serious operational and structural issues for the Delta-Mendota Canal (DMC). In response, the USGS is studying and providing information on groundwater conditions and land subsidence in the San Joaquin Valley.

Groundwater pumping caused widespread compaction and resultant land subsidence between 1926 and 1970, locally exceeding 26 feet. Surface-water imports in the early 1970s resulted in decreased pumping, reduced compaction rate, and a steady recovery of groundwater levels. However, lack of imported surface-water availability during 1976-77, 1986-92, and 2007-09 caused groundwater-pumping increases, renewed compaction, and declines in water-levels to near-historic lows. The resulting land subsidence has reduced the freeboard and flow capacity of the Delta-Mendota Canal, the California Aqueduct, and other canals that transport floodwater and deliver irrigation water , requiring expensive repairs.

One area of the Central Valley, southwest of Mendota, has experienced some of the highest levels of subsidence in California. From 1925 to 1977, this area suffered over 29 feet of subsidence.

The canal begins at the C.W. Bill Jones Pumping Plant, which pumps water 197 feet from the Sacramento-San Joaquin Delta. The canal runs south along the western edge of the San Joaquin Valley, parallel to the California Aqueduct for most of its journey, but it diverges to the east after passing San Luis Reservoir, which receives some of its water. The water is pumped from the canal and into O'Neill Forebay. Then it is pumped into San Luis Reservoir by the Gianelli Pumping-Generating Plant. Occasionally, water from O'Neill Forebay is released into the canal. The Delta-Mendota Canal ends at Mendota Pool, on the San Joaquin River near the town of Mendota, 30 miles west of Fresno.

Evaluation of Land Subsidence along the Delta-Mendota Canal

The U.S. Geological Survey, in cooperation with the U.S. Bureau of Reclamation and the San Luis and Delta-Mendota Water Authority, assessed land subsidence in the vicinity of the Delta-Mendota Canal as part of an effort to minimize future subsidence-related damages to the canal. The location, magnitude, and stress regime of land-surface deformation during 2003-10 were determined by using extensometer, Global Positioning System (GPS), Interferometric Synthetic Aperture Radar (InSAR), spirit leveling, and groundwater-level data. Comparison of continuous GPS, shallow extensometer, and groundwater-level data, combined with results from a one-dimensional model, indicated the vast majority of the compaction took place beneath the Corcoran Clay, the primary subsurface regional confining unit. 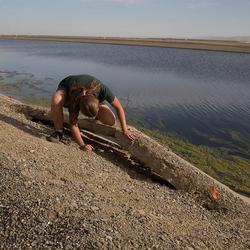 The Central Valley in California (USA) covers about 52,000 km2 and is one of the most productive agricultural regions in the world. This agriculture relies heavily on surface-water diversions and groundwater pumpage to meet irrigation water demand. Because the valley is semi-arid and surface-water availability varies substantially, agriculture relies heavily on local groundwater. In the southern t
By
Water Resources, California Water Science Center
November 21, 2013

Land subsidence along the Delta-Mendota Canal in the northern part of the San Joaquin Valley, California, 2003-10

Extensive groundwater withdrawal from the unconsolidated deposits in the San Joaquin Valley caused widespread aquifer-system compaction and resultant land subsidence from 1926 to 1970—locally exceeding 8.5 meters. The importation of surface water beginning in the early 1950s through the Delta-Mendota Canal and in the early 1970s through the California Aqueduct resulted in decreased pumping, initia
By
Water Resources, California Water Science Center
June 30, 2009

California's Central Valley covers about 20,000 square miles and is one of the most productive agricultural regions in the world. More than 250 different crops are grown in the Central Valley with an estimated value of $17 billion per year. This irrigated agriculture relies heavily on surface-water diversions and groundwater pumpage. Approximately one-sixth of the Nation's irrigated land is in the
By
Water Resources, Water Availability and Use Science Program, California Water Science Center