Sediment is fragmental material transported by, suspended in, or deposited by water or air, or accumulated in beds by other natural agents. Sediment particles range in size from large boulders to colloidal-size fragments and vary in shape from rounded to angular. They also vary in mineral composition and specific gravity. Sediment is derived from a parent material subjected to erosional processes by which particles are detached and transported by gravity, wind, water, or a combination of these agents.

New Mexico Sediment Program
The first gaging station established by the Geological Survey in the United States was on the Rio Grande at Embudo Jan. 1, 1889. Cooperation with Territory of New Mexico began about 1907, and Territory or State cooperation in varying amounts continued until 1915, the work being directed from the Denver office. From 1916 to 1930 the State conducted its own stream-gaging program. In 1931 a new State cooperative program was begun and a Geological Survey district office established in Santa Fe. Agreements have also existed with county, municipal, and private organizations, and with other Federal agencies. 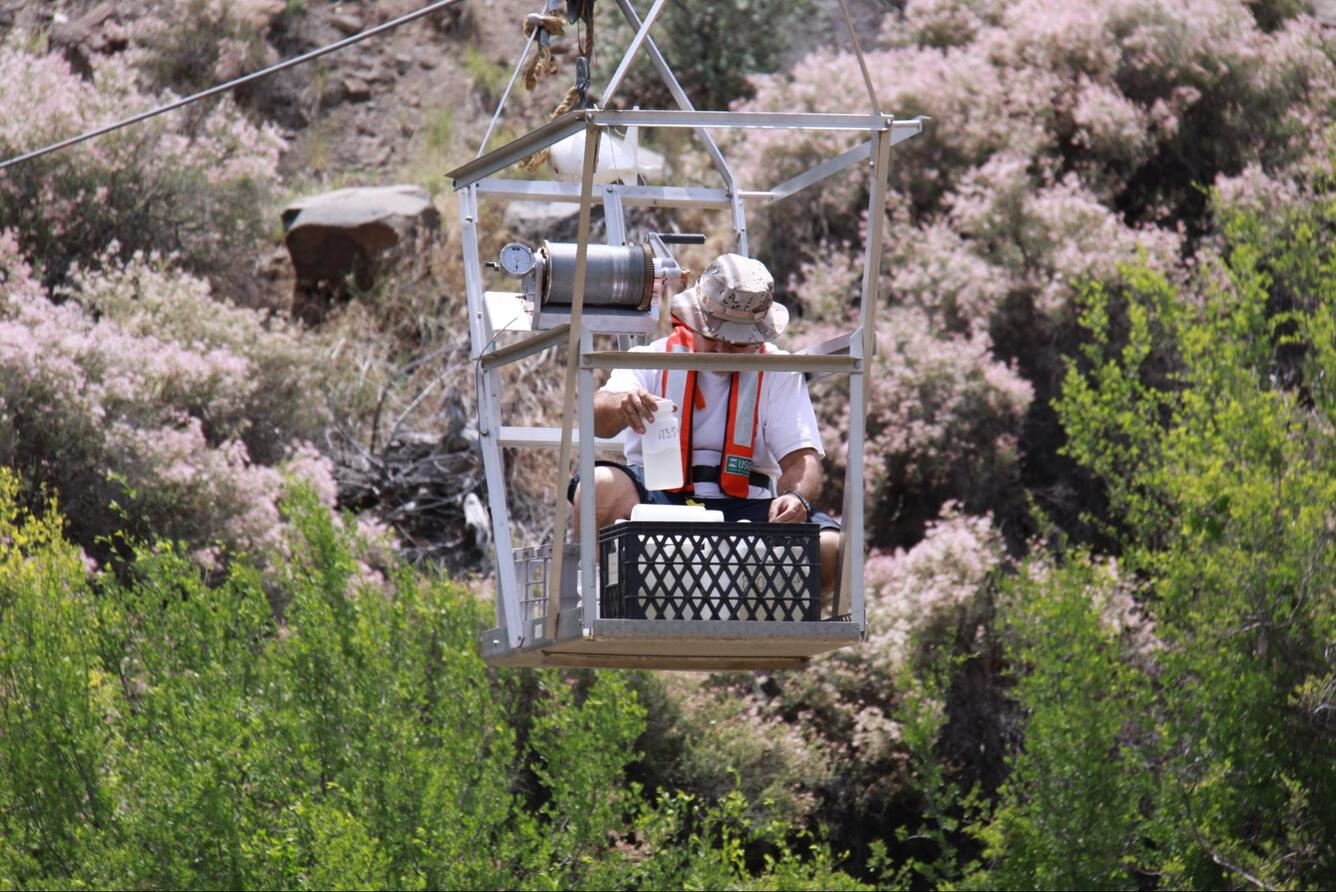 Sediment Characteristics
Sediment is fragmental material transported by, suspended in, or deposited by water or air, or accumulated in beds by other natural agents. Sediment particles range in size from large boulders to colloidal-size fragments and vary in shape from rounded to angular. They also vary in mineral composition and specific gravity. Sediment is derived from a parent material subjected to erosional processes by which particles are detached and transported by gravity, wind, water, or a combination of these agents. When the transporting agent is water, the sediment is termed fluvial sediment”.  The U.S. Geological Survey (USGS) defines fluvial sediment as fragmentary material that originates mostly from weathering of rocks and is transported by, suspended in, or deposited from water (Glysson, 1989). 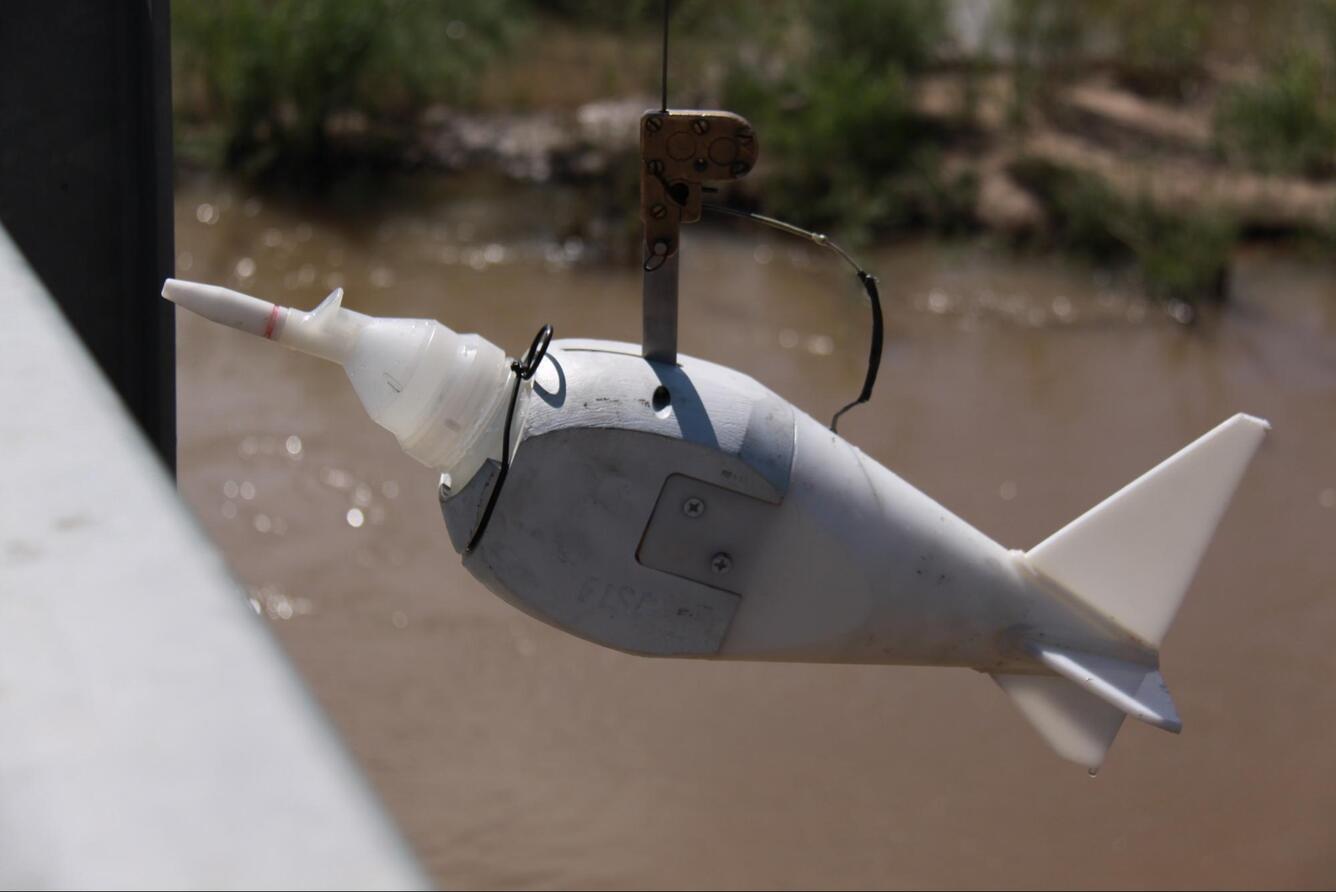 Functions of Sediment Collection
Knowledge of the erosion, transport, and deposition of sediment relative to land surface, streams, reservoirs, and other bodies of water is important to those involved directly and indirectly in the development and management of water and land resources. The need for a clear understanding of hydrogeomorphic processes associated with sediment requires the measurement of suspended and bed sediments for a wide range of hydrologic environments. (Glysson, 1989).
The usual purpose of sediment sampling is to determine the instantaneous mean discharge-weighted suspended-sediment concentration at a cross section. Such concentrations are combined with water discharge to compute the measured suspended sediment discharge. A mean discharge-weighted suspended-sediment concentration for the entire cross section is desired for this purpose and for the development of coefficients to adjust observer and automatic pumping-type sampler data. Ideally, the best procedure for sampling any stream to determine the sediment discharge would be to collect the entire flow of the stream over a given time period, remove the water, and weigh the sediment. Obviously, this method is a physical impossibility in the majority of instances. Instead, the sediment concentration of the flow is determined by (1) collecting depth-integrated suspended-sediment samples that define the mean discharge-weighted concentration in the sample vertical and (2) collecting sufficient verticals to define the mean discharge weighted concentration in the cross section (Glysson, 1989). 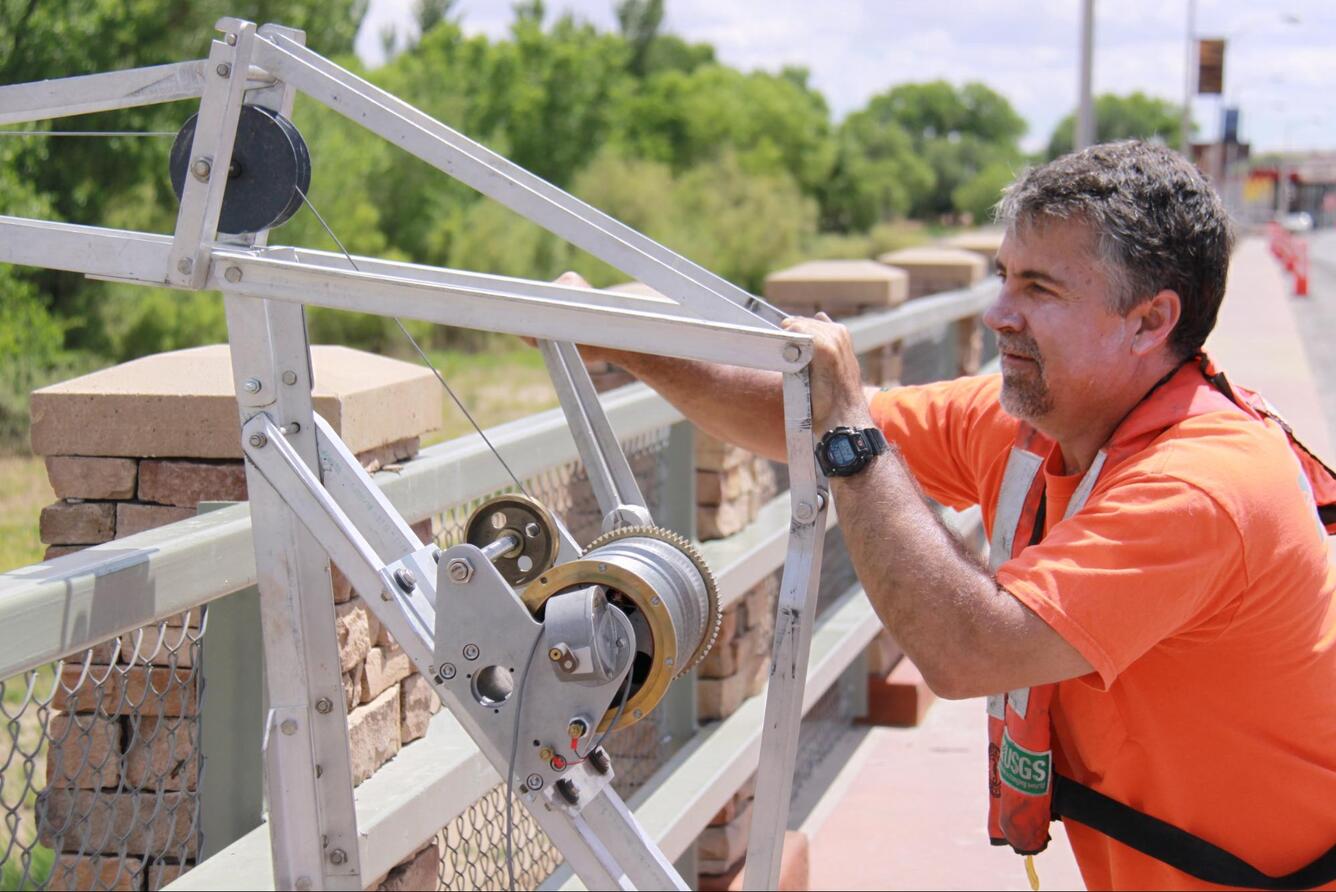 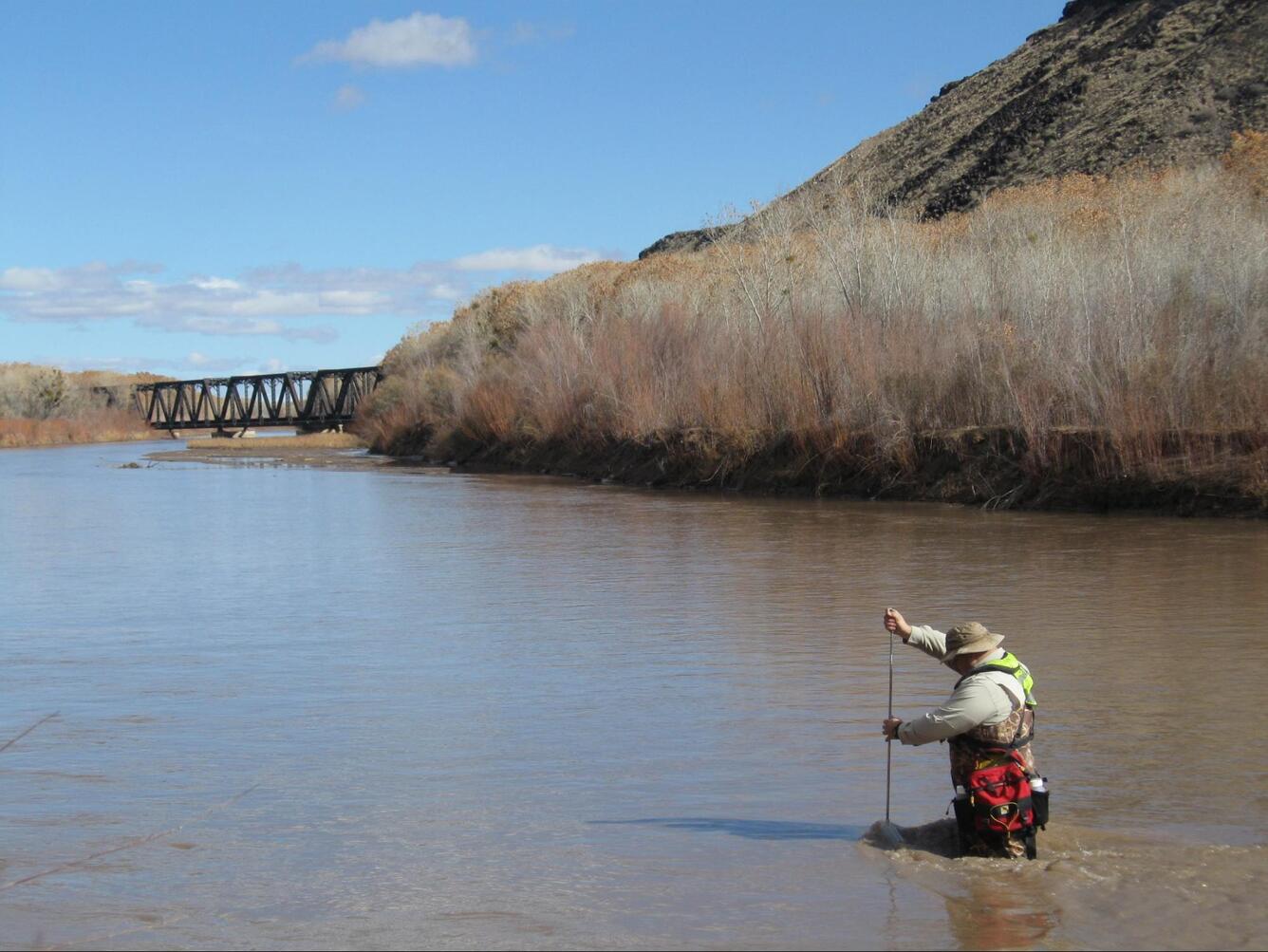 Single Vertical
The objective of collecting a single-vertical sample is to obtain a sample that represents the mean discharge-weighted suspended-sediment concentration in the vertical being sampled at the time the sample was collected. The method used to do this depends on the flow conditions and particle size of the suspended sediment being transported (Glysson, 1989).

Surface and Dip Sampling
A surface sample is one taken on or near the surface of the water, with or without a standard sampler. At some locations, stream velocities are so great that even the heaviest samplers will not reach the streambed while attempting to integrate the sampled vertical. Under such conditions, it can be expected that all, except the largest, particles of sediment will be thoroughly mixed within the flow. Therefore, a sample near the surface is representative of the entire vertical (Glysson, 1989).

Point Samples
A point sample is a sample of the water-sediment mixture collected from a single point in the cross section. Data obtained in this manner may be used to define the distribution of sediment in a single vertical, such as the observer’s fixed station, the vertical and horizontal distribution of sediment in a cross section, and the mean spatial sediment concentration (Glysson, 1989). 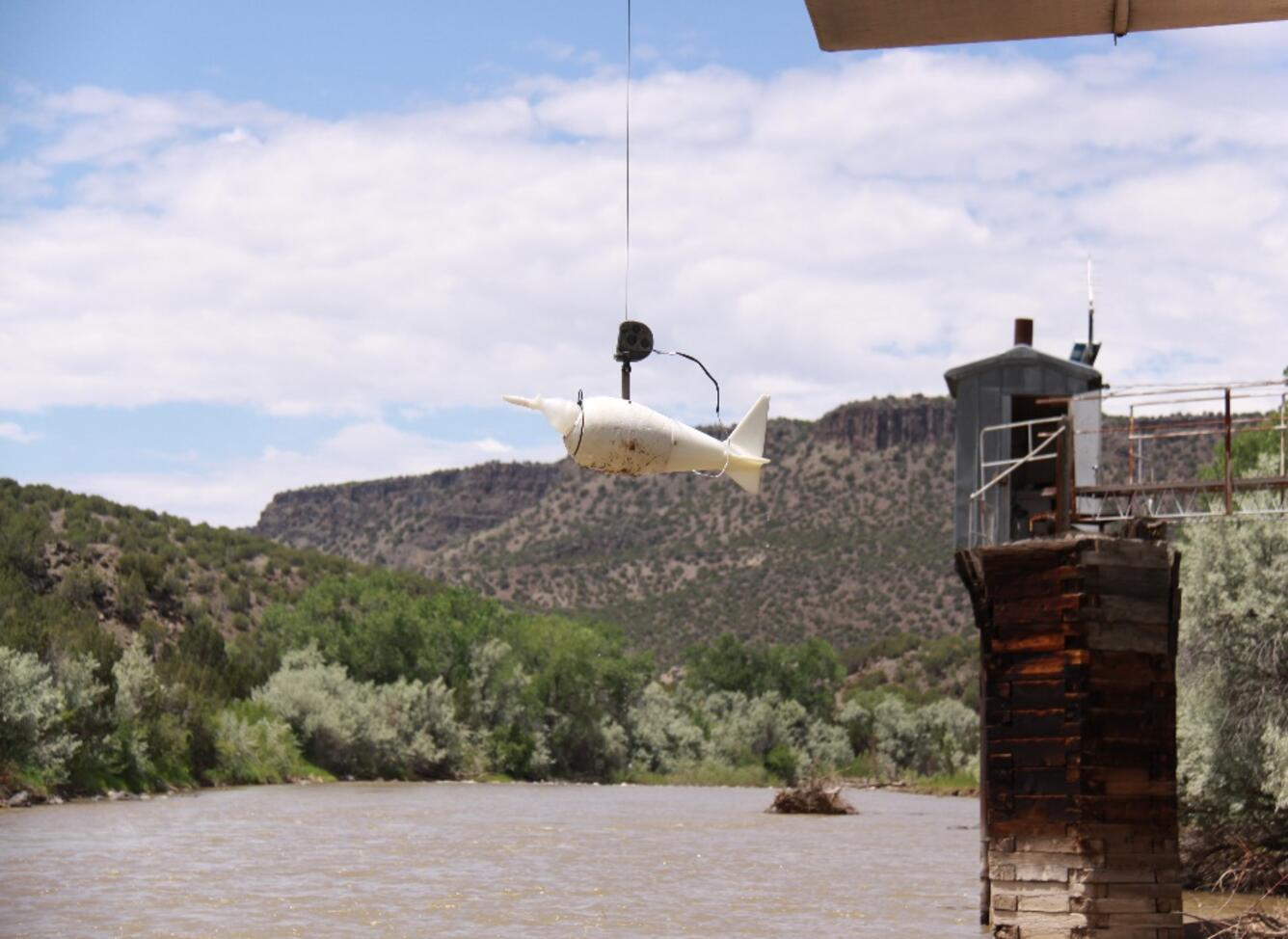 Multivertical Sampling
A depth-integrated sample accurately collected will represent the discharge-weighted suspended-sediment concentration along the vertical at the time of the sample collection. The USGS uses two basic methods to define the location or spacing of the verticals. One is based on equal increments of water discharge; the second is based on equal increments of stream or channel width (Glysson, 1989).

The Equal Discharge Increment Method (EDI)
With the EDI method samples are obtained from the centroids of equal-discharge increments. This method requires some knowledge of the distribution of streamflow in the cross section. A discharge measurement should be made to determine immediate flow or the use of historic discharge record (Glysson, 1989).

The Equal Width Increment Method (EWI)
A cross-sectional suspended-sediment sample obtained by the EWI method requires a sample volume proportional to the amount of flow at each of several equally spaced verticals in the cross section. This equal spacing between the verticals (EWI) across the stream and sampling at an equal transit rate at all verticals yields a gross sample volume proportional to the total streamflow. The number of verticals required for an EWI sediment-discharge measurement depends on the distribution of concentration and flow in the cross section at the time of sampling, as well as on the desired accuracy of the result (Glysson, 1989). 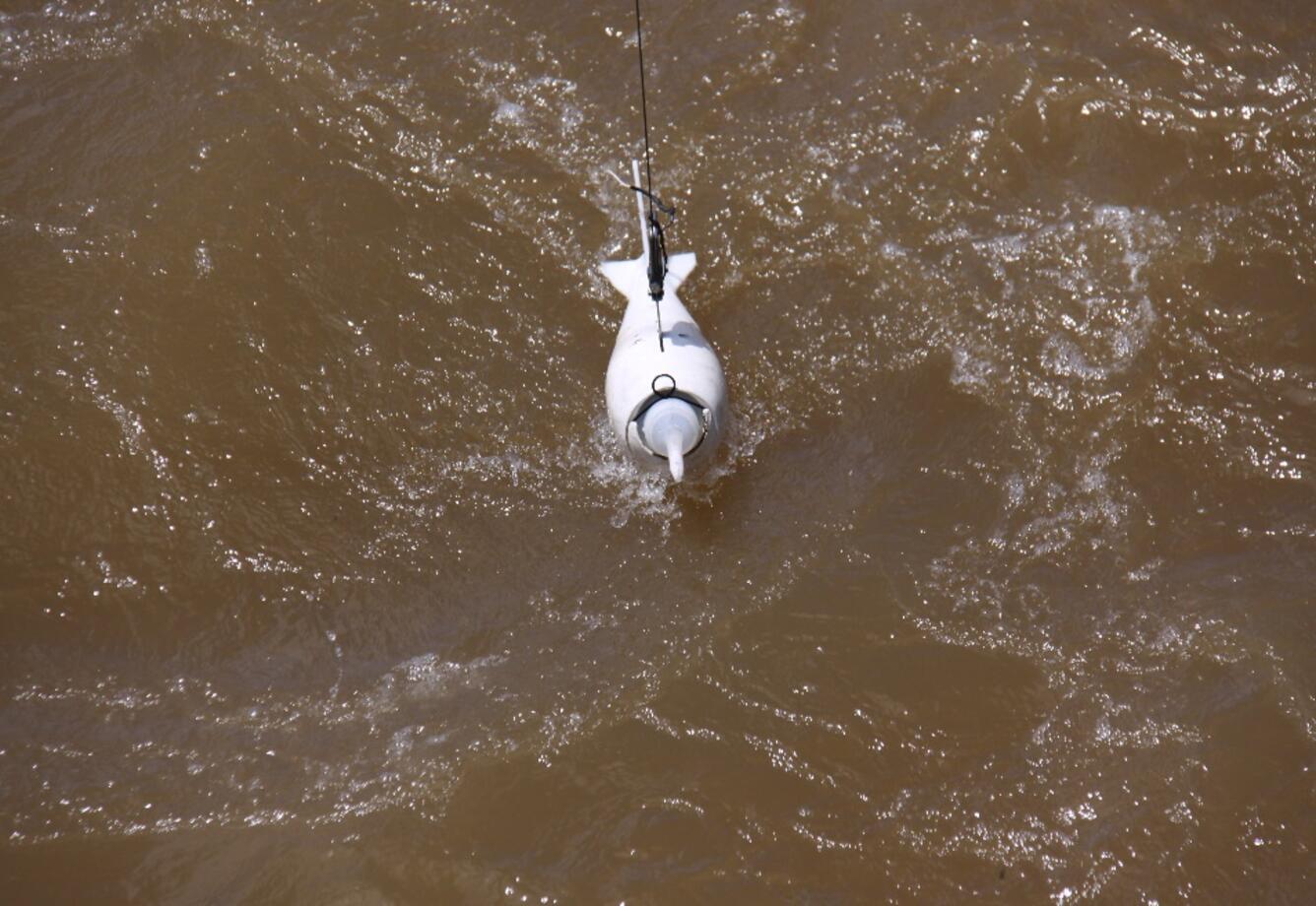 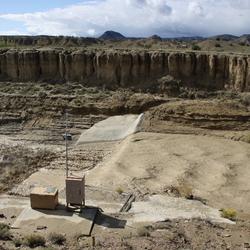 The U. S. Geological Survey (USGS), New Mexico Water Science Center (NMWSC), works in cooperation with State and Federal agencies in New Mexico to provide reliable and impartial sediment data and interpretation to resource managers, planners, and other stakeholders, and the general public. The NMWSC has been collecting daily suspended sediment samples and periodic turbidity, bed material...
Learn More