The present landforms of Long Island are the result of many geologic processes, some of which began many millions of years ago and some of which began only recently. Most of the major features of the present-day topography, however, are related to the last glaciation, which ended approximately 22,000 years ago.

The most prominent landforms of Long Island are (a) the two lines of hills that form the "backbone" and the "forks" of the island, (b) the gently sloping plain that extends southward from the hills, (c) the deeply eroded headlands along the north shore, and (d) the barrier beaches along the south shore.

The two lines of hills, known as "terminal moraines" reach a maximum altitude of about 400 feet above sea level, and are separate and distinct in the central and eastern parts of the island, but merge in the western part (figure 2). The southernmost lines of hills the Ronkonkoma moraine is the older of the two; it extends eastward to form the South Fork. The northern line of hills -- the Harbor Hill moraine -- extends eastward along the north shore of Long Island to form the North Fork. The moraines are composed of poorly sorted rock debris (glacial till) consisting of boulders, gravel, sand, silt, and clay, which was pushed ahead of and incorporated within the continental ice sheets when the ice advanced onto the island, and which was subsequently deposited during melting of the ice sheets.

The moderately flat surface that extends southward from the Ronkonkoma and Harbor Hill moraines to the south-shore bays is called an outwash plain. It is mainly a depositional feature composed of and underlain by well sorted sand and gravel deposited by streams that were fed by glacial melt water. The outwash plain generally begins at an altitude of about 100-150 feet, and slopes southward at a rate of about 20 feet per mile until it merges with recent swampy deposits along the coast (Cohen and others, 1968).

The eroded headlands along the north shore are composed mainly of glacial deposits, but streams and waves sculptured their final form. After the ice sheets retreated northward, the land surface of Long Island rose slightly (rebounded) with respect to sea level. The headlands were deeply eroded, and the many wide and deep harbors along the north shore were carved by northward-flowing streams. Wave erosion has steepened the northern slopes of the headlands into nearly vertical bluffs that, in places, are about 100 feet high.

Along the south shore, waves and ocean currents have reworked the deposits along uplifted shoreline to form off-shore bars (commonly referred to as barrier beaches). In terms of geologic time, these barrier beaches are ephemeral features that are gradually being eroded by wave action, and whose positions are continually changing owing to ocean currents. Sand and silt, as well as organic deposits, deposited by the wind, streams, salt-water currents, and storms (washover fans), tend to fill the shallow bays behind the barrier beaches (Cohen and others, 1968).

State of the Aquifer System 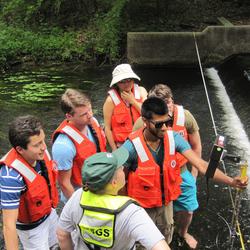 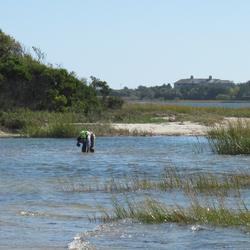 On Long Island, land use includes the human activities and management practices for which land is used. Land cover is a mosaic of developed, forest, agriculture, and wetlands areas. Both land use and land cover are usually discussed in similar environments. The National Land Cover Database (NLCD) serves as the definitive LANDSAT-based, 30-meter resolution, land cover database for the Nation. NLCD...
By
New York Water Science Center
link
June 5, 2017

On Long Island, land use includes the human activities and management practices for which land is used. Land cover is a mosaic of developed, forest, agriculture, and wetlands areas. Both land use and land cover are usually discussed in similar environments. The National Land Cover Database (NLCD) serves as the definitive LANDSAT-based, 30-meter resolution, land cover database for the Nation. NLCD...
Learn More