Eutrophication, or excess nutrients in streams, is typically one of the top reasons that a stream is listed as impaired on the 303(d) list as part of the Clean Water Act. 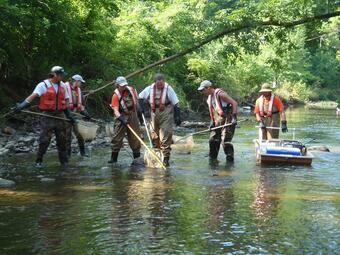 Initially it was hoped that a strong linear relation would be found between nutrient and algal biomass concentrations, such as chlorophyll a, that would allow standards to be set to improve water quality. Unlike in lakes, a strong correlation has not been found and it has become important to use biological community response to nutrient concentrations to show improvements in water quality.

The Ohio-Kentucky-Indiana WSC has had several projects with multiple collaborators to assess the biological response to nutrients since 2001. The first collaboration was with the Indiana Department of Environmental Management (IDEM) that added an assessment of algal biomass, both sestonic and periphytic chlorophyll a (CHLa) to the sites being sampled by IDEM for macroinvertebrate and fish community data. The goals of this early work were to provide an algal biomass assessment in Indiana streams and rivers as well as assess if algal biomass would correlate to biological community variables. Over 300 sites were sampled in Indiana between 2001 and 2005 in order to investigate the effects of nutrients on algal biomass and biological communities. The results from these studies will be used by IDEM to develop nutrient criteria for Indiana rivers and streams.

A second major study was done in Indiana and Ohio as part of the U.S. Geological Survey (USGS) National Water-Quality Assessment (NAWQA) Nutrient Enrichment Effects (NEET) study. The analysis in this study relates algal-, invertebrate-, and fish-community composition to habitat, nutrients, and land-use variables along a previously determined nutrient-concentration gradient. The study was conducted in 30 agriculturally dominated watersheds within the U.S. Environmental Protection Agency (USEPA) Level III Eastern Corn Belt Plains (Ecoregion 55). Study sites were selected to minimize differences in the physical habitat while maximizing differences in nutrient concentration along a nutrient (TP and TN) gradient. In regional-gradient studies of biological communities, it is important to minimize the effects of natural variables that can mask the relations between the variables of interest, in this case nutrients, and their effects on the biological community. These natural variables can include geology, soils, land use, basin size, and physical habitat. Information from this study may help determine which biological-community-composition group or groups are most appropriate in nutrient-assessment studies and nutrient-criteria development.

Nutrient, habitat, and basin-characteristics data and relations with fish- and invertebrate communities in Indiana streams (1998-2000) 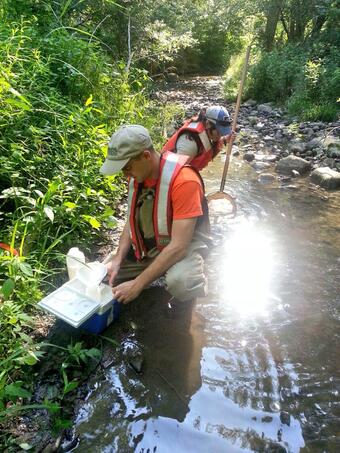 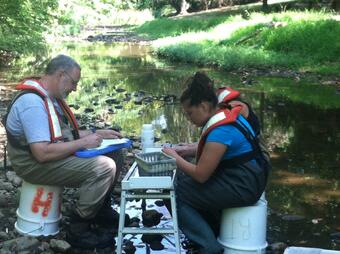 Phytoplankton growth and assembly in relation to nutrient supply and other environmental factors in the White River Basin, Indiana

Assessment of nutrient enrichment by use of algal-, invertebrate-, and fish-community attributes in wadeable streams in ecoregions surrounding the Great Lakes

Assessment of nutrient enrichment by use of algal-, invertebrate-, and fish-community attributes in wadeable streams in ecoregions surrounding the Great Lakes

The algal, invertebrate, and fish taxa and community attributes that best reflect the effects of nutrients along a gradient of low to high nutrient concentrations in wadeable, primarily midwestern streams were determined as part of the U.S. Geological Suvey's National Water-Quality Assessment (NAWQA) Program. Nutrient data collected from 64 sampling sites that reflected reference, agricultural, an
By
Water Resources, Ohio-Kentucky-Indiana Water Science Center
June 8, 2010

Water chemistry, periphyton and seston chlorophyll a (CHLa), and biological community data were collected from 321 sites from 2001 through 2005 to (1) determine statistically and ecologically significant relations among the stressor (total nitrogen, total phosphorus, periphyton and seston CHLa, and turbidity) variables and response (biological community) variables; and, (2) determine the breakpoin
By
Water Resources, Ohio-Kentucky-Indiana Water Science Center
February 13, 2009

Occurrence and distribution of algal biomass and Its relation to nutrients and selected basin characteristics in Indiana streams, 2001-2005

Data were gathered from July through September 2001 at 34 randomly selected sites in the West Fork White River Basin, Indiana for algal biomass, habitat, nutrients, and biological communities (fish and invertebrates). Basin characteristics (drainage area and land use) and biological-community attributes and metric scores were determined for the basin of each sampling site. Yearly Principal Compone
By
Water Resources, Ohio-Kentucky-Indiana Water Science Center
November 28, 2007

Data were gathered from May through September 2002 at 76 randomly selected sites in the Whitewater River and East Fork White River Basins, Indiana, for algal biomass, habitat, nutrients, and biological communities (fish and invertebrates). Basin characteristics (land use and drainage area) and biolog-ical-community attributes and metric scores were determined for the basin of each sampling site. Y
November 28, 2007

Nutrient, Habitat, and Basin-Characteristics Data and Relations with Fish and Invertebrate Communities in Indiana Streams, 1998-2000

An analysis of existing nutrient, habitat, basin-characteristics, and biological-community (fish and invertebrate) data assessed significant relations between nutrients and biological data. Data from 1998 through 2000 for 58 sites in the Upper Wabash River Basin, Lower Wabash River Basin, and tributaries to the Great Lakes and Ohio River Basins were analyzed. Correspondence analysis was used to as
By
Water Resources, Ohio-Kentucky-Indiana Water Science Center