Sediment Trap in Gulf of Mexico Recovered for the Last Time, Marking the Culmination of a 12-year Time Series of Climate Data Collection

By understanding modern changes in temperature, and therefore past changes in the climate of the Gulf of Mexico, scientists can better predict climate changes in Earth’s future– just by studying teeny tiny forams.

This article is part of the January-March 2020 issue of the Sound Waves newsletter.

Climate data has only been measured directly by scientific instruments for a short period of time. For instance, thermometers weren’t invented until the 1500’s–1600’s, and the first satellite didn’t launch until 1957. So how can we discuss changes in Earth’s climate during times prior to these periods of scientific innovation? Scientists have developed new and exciting methods to measure information about climate changes in the past by using natural recorders (or “proxies”) of climatic data. Some of these records of climate change can even be gathered from marine life.

Back in 2008, USGS scientists sent a piece of equipment to the bottom of the Gulf of Mexico for a long-term climate proxy calibration project. They placed the device about 100 miles south of the Louisiana coastline in almost 4,000 feet of water! This device, called a sediment trap, captured small particles falling through the water column. The sediment trap acts just like a funnel, collecting particles into a cup at the bottom of the trap. Every two weeks, a panel at the bottom rotates, replacing the cup full of data-rich samples with a new, empty collection cup. How exactly do these tiny particles collected in these cups from deep in the Gulf of Mexico teach us about climate change?

The particles collected by the sediment trap included foraminifera, single-celled microscopic shelled organisms smaller than the tip of a pencil. These forams have been on Earth since before the dinosaurs, and their shells, as tiny as they may be, hold the key to understanding how our planet’s climate has changed over tens of thousands of years. Foram shells incorporate information about their environment such as ocean chemistry, temperature, and salinity, essentially acting as little thermometers. They only live in the water column for a few weeks, and eventually die and sink to the bottom of the ocean (or into a sediment trap) and pile up in layers. This layering of sediment and forams on the ocean floor therefore creates a detailed record of environmental change.

Scientists Julie Richey and Caitlin Reynolds of the USGS St. Petersburg Coastal and Marine Science Center went on a research cruise in early February to retrieve the sediment traps that have been collecting foraminifera in the Gulf of Mexico for 12 years. This project was among some of the longest running sediment trap programs in the world! The 2020 trip was the final cruise of the project. They boarded R/V (research vessel) Pelican out of the Louisiana Universities Marine Consortium in Cocodrie, Louisiana for the 23rd time on February 7, 2020. They traveled to the sediment trap once or twice a year for the entire study period to collect the sample jars from the sediment trap and replace them with new sample containers. This trip was different because the trap would be coming back to the lab with them rather than going back to the bottom of the Gulf.

USGS partnered with several other academic institutions throughout the study period. On this final trip, they were accompanied by Dr. Eric Tappa of the University of South Carolina (U of SC)–one of the world’s leading experts in sediment trap deployment and data collection; Dr. Kaustubh Thirumalai of the University of Arizona, a paleoceanographer who studies marine climate proxies such as foraminifera; and undergraduate students from U of SC and Eckerd College: Mina Suprenant, Cassandra Guzman, and Sophia Chernoch, who had the opportunity to participate in this project as their first offshore research experience. This cruise was a valuable experience for the undergraduate students, as it provided an opportunity to be immersed in an oceanographic research project while experiencing life in the field.

So, scientists can collect forams from the ocean floor and run chemical analyses on them, but how does this actually translate to climate information? While the sediment trap collected foraminifera from the water column, scientists collected environmental information around them about water temperature, salinity, and rainfall. The scientists know the time that each jar was collecting samples and can correlate data from the forams to environmental data during that time period. Scientists take the forams back to the lab and analyze their shell chemistry. They then make equations that draw relationships between foram shell chemistry and the environmental data collected, resulting in the forams acting as a “proxy” of environmental information.

For example, scientists can measure the concentration of magnesium and calcium within the shells and calculate the ratio of these two elements. This ratio is directly related to the temperature of the ocean. When it’s warmer, more magnesium is incorporated into the shells, and when it’s cooler, there’s less. By studying these relationships over a long time period, USGS scientists can improve their equations so they can be used to translate information such as magnesium-calcium ratios from fossil forams they collect from the sediment into a long-term temperature record that extends beyond the invention of our scientific instruments.

A lot of high-quality information is collected during these cruises in the Gulf of Mexico–but why was this particular location chosen? These sediment traps were placed in this region of the Gulf due to its major influence on climate— not just in North America, but globally. The temperature of the Gulf is tightly linked to rainfall patterns in the US, heat transport to higher latitudes, and the intensification of hurricanes along the Gulf Coast of the United States. This region also receives a large amount of land-based inputs from the Mississippi outflow, so measuring certain parameters of forams in this area of the Gulf can also inform us about links between land and marine climate. The Gulf of Mexico is also the starting point of the Gulf Stream current, which is one of the major drivers of weather patterns in the northern hemisphere. The Gulf Stream Current carries warm water that heats the air, allowing for milder climates as far as northern Europe. By understanding modern changes in temperature, and therefore past changes in the climate of the Gulf of Mexico, scientists can better predict climate changes in Earth’s future– just by studying teeny tiny forams. 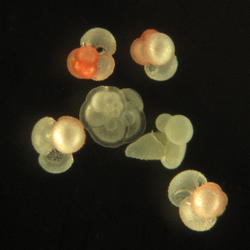 A sediment trap time series in the northern Gulf of Mexico is used to better assess the control of environmental variables (e.g., temperature and salinity) on the flux of both microfossils and molecular fossils to the sediments. The information gained from sediment trap studies is used to develop better proxy-based estimates of past oceanographic conditions from analyses of microfossils and...
By
Ecosystems, Climate Research and Development Program, St. Petersburg Coastal and Marine Science Center
link
February 27, 2018

A sediment trap time series in the northern Gulf of Mexico is used to better assess the control of environmental variables (e.g., temperature and salinity) on the flux of both microfossils and molecular fossils to the sediments. The information gained from sediment trap studies is used to develop better proxy-based estimates of past oceanographic conditions from analyses of microfossils and...
Learn More