One of the primary goals of this project was to test the hypothesis that long-term, large-volume hydrocarbon production along the Gulf Coast resulted in land-surface subsidence, reactivation of deep-seated faults, and wetland loss in Texas and Louisiana.

This research is part of the Subsidence and Wetland Loss Related to Fluid Energy Production, Gulf Coast Basin project.

Historical delta-plain subsidence rates were assessed  by analyzing tide-gauge records, elevation changes at benchmarks between repeat leveling surveys, and Global Positioning System (GPS) vertical velocities at Continuously Operating Reference Stations (CORS). Rates of  relative sea-level rise (RSLR) at tide gauges can be used as a proxy for vertical land motion if the records are long enough that trends can be established. The National Ocean Service tide gauge at Grand Isle, Louisiana has a nearly-continuous record since 1947 – the longest such record in Louisiana and one of the longest in the northern Gulf of Mexico. The average rate of RSLR at Grand Isle is about 9.3 millimeters per year (mm/yr); however, this rate has not been constant through time. Rates of RSLR accelerated from about 3.3 mm/yr between 1947 and 1965 to about 10.7 mm/yr between 1965 and 1993 and then declined to about 4.1 mm/yr since 1993. The potential effects of interannual and decadal variations in regional water levels on the Grand Isle RSLR trends were evaluated by comparison with the record at Pensacola, Florida, which is the nearest tide gauge that is located in a relatively stable geologic setting. Here, the overall trend is a relatively uniform rate of RSLR of about 2.1 mm/yr since 1924. There are no pronounced periods of RSLR acceleration and deceleration at Pensacola, indicating that the Grand Isle RSLR temporal variability is specific to the southern Mississippi River delta plain.

Data from repeat leveling surveys conducted by the National Geodetic Survey at benchmarks along state highways that follow the natural levees of Bayou Petit Caillou, Bayou Lafourche, and the Mississippi River can be used to derive decadal-scale elevation changes between leveling epochs. General temporal and spatial trends can be identified by comparing magnitudes and average rates of subsidence for the same area and for consecutive periods. For example, average subsidence rates along Bayou Lafourche accelerated from about -8 mm/yr prior to 1982 to about -11.1 mm/yr from 1982 to 1993. Although a lack of reported data since 1993 prevents using this method to determine more recent trends, vertical velocities determined from the GPS records provide the most recent, highly accurate, measurements of vertical land motion in the southern Mississippi River delta plain since the CORS stations were established beginning in the early 2000s. Through 2007, the GPS-derived subsidence rates at three CORS stations in the delta plain ranged from -3.5 to -6.3 mm/yr.

Other researchers hypothesized that historical subsidence and wetland loss in the delta plain were due to (1) natural compaction of the thick Holocene deltaic sediments or (2) natural neotectonic processes. Although compaction of unconsolidated Holocene sediments within the incised Mississippi River valley is a component of total subsidence, time-averaged subsidence rates derived from radiocarbon dating of delta-plain peats and numerical models of sediment compaction are generally less than about -5 mm/yr, which is an order of magnitude less than the highest observed historical rates. The radiocarbon data also do not show prior evidence for abrupt, regional submergence of the wetlands like what occurred historically. Instead, the chronology of peat formation and submergence was related to delta-lobe switching. Tectonic processes such as salt evacuation, sediment loading, and growth faulting were key drivers of sediment accumulation and continental shelf-margin development beneath what is now the southern Louisiana coastal plain; however, these processes operate on geologic time scales, making it difficult to explain the observed decadal-scale acceleration and deceleration of historic subsidence rates. In addition, neither of these hypotheses adequately explain the temporal similarities in wetland-loss trends across the northern Gulf coastal plain despite regional differences in geologic and physiographic setting. 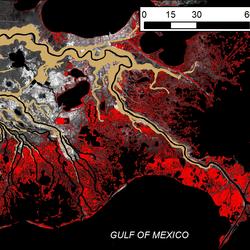 Research (2000 - 2011) at the St. Petersburg Coastal and Marine Science Center focused on better understanding the physical processes and human activities that contributed to historical wetland loss in coastal Louisiana and the spatial and temporal trends of that loss.
Learn More