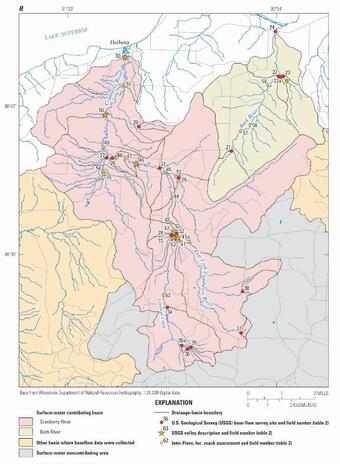 Tributaries to Lake Superior in Bayfield County, Wis., have accelerated erosion and sedimentation rates influenced by present and historical watershed land cover, as well as erosion and sedimentation problems due to steep slopes, erodible soils, and flashy runoff. Geomorphic conditions in the streams have been altered by changes in flood and sediment load characteristics. Flood magnitudes are elevated above those experienced prior to European settlement in the 1870s, as increased volume and peak flows have resulted primarily from land clearing for agriculture and logging practices. Primary sediment sources are gully erosion, main stem incision, and bank and bluff erosion. Increased flood peaks, along with sand transport and deposition, have reduced suitable spawning habitats for native and nonnative trout and salmon species, including brook trout. Accelerated sediment loads also may be impacting coastal wetlands along Lake Superior.

In August 2005, additional funds were obtained from the Great Lakes Commission and the Wisconsin DNR to demonstrate gully/ravine erosion and bluff/bank erosion control techniques via upland infiltration, and land cover and channel structures in the Bark River. The Civil and Environmental Engineering Department developed erosion-control techniques. The Forest Ecology and Management Department is studying upland infiltration/runoff related to forest cover and type. The USGS monitored channel morphology, sediment movement, and continuous streamflow.

The main objectives of the Bark River gully monitoring and restoration study are to: (1) demonstrate the effectiveness of in channel and on land methods to reduce sediment supply to and deposition on a brook trout spawning area of the Bark River, Bayfield Pennisula, WI, (2) utilize natural and/or artificial materials to create drop structures or steps at appropriate locations along the channel that reduce the slope, incision and erosion of the tributary and/or flow deflecting structures (e.g., barbs, vanes) and bank toe protecting structures in the channel to stabilize the channel and control lateral migration (meandering), (3) measure contributions of land cover and soil types to land runoff and alter micro topography to spread and detain land runoff to the channel, (4) implement before and after controls to monitor channel conditions and accumulated sediment in a spawning area that is either in the main channel downstream of the junction of the treated tributary and the main channel or farther downstream in the treated tributary, and (5) develop methods that are effective in reducing land runoff, reducing sediment impacts on stream spawning areas and downstream water quality, and stabilizing channel morphology.

The approach for the USGS component of the study was to provide Inter-Fluve and local government agencies with background geomorphic information that could be used to make sound management decisions. For all watersheds, drainage boundaries were constructed and watershed/landscape-scale land cover, soils, and geologic setting data were compiled. Longitudinal profiles were constructed. Video footage from helicopter surveys was analyzed for erosion and sedimentation hot spots. Reaches with past bank stabilization projects were evaluated. A ground-water model was completed for the Bayfield Peninsula. A rainfall/runoff model was completed for the Cranberry River. Valley cross sections, coring, and estimated sedimentation rates were established for reaches of the Cranberry River. A core also was collected near the mouth of Whittlesey Creek.

The approach for the additional work on the Bark River was to first demonstrate the effectiveness of appropriate channel stabilization techniques on a tributary to the main stem of the Bark River in reducing the amount of sediment deposited on a downstream spawning area and relate this effectiveness to the land runoff from its forested watershed.  Storm runoff modeling indicated that peak flows in forested watersheds are still 25 percent higher than peak flows prior to European settlement. Over the last 100 years, forests have been managed mainly for pulp production. In the mid 1990s, many headwater areas were clearcut to an extent comparable to the logging of the virgin forests. Local riparian residents reported that sediment-related problems on streams were worse following the logging. Dennis Pratt, Wisconsin Department of Natural Resources (WDNR) fishery biologist and manager for this region, has reported that native and non-native fish habitats have been impacted from increased flood peaks, erosion, and sedimentation in these streams. This study is an extension of ongoing work (since 2000) on North Fish Creek, where submerged vanes and other methods are being used at three sites along the upper main stem to stabilize 3 of the 17 high bluffs, which contribute approximately 2/3 of the sediment to downstream spawning areas.

University of Wisconsin - Madison, Department of Civil and Environmental Engineering

University of Wisconsin - Madison, Department of Forest and Wildlife Ecology