Together with Federal and non-profit partners, WERC's Josh Adams and team are using cutting-edge technology to study the range and colony attendance patterns of the Ashy Storm-Petrel, an elusive seabird native to  offshore rocks and islands along the California coast. Their research  informs management and conservation for this threatened seabird species.

The Ashy Storm-Petrel (Oceanodroma homochroa) is a species of seabird found exclusively off the coast of California and Baja California, Mexico.  The species is considered “Endangered” by the International Union for Conservation of Nature  and is a California species of special concern. Ashy Storm-Petrels (hereafter storm-petrels) spend most of their lives at sea, but come ashore during the spring and summer to nest in burrows and crevices on offshore rocks and islands. To avoid predators, storm-petrels only arrive and depart their island nests under the cover of darkness. Dr. Josh Adams and WERC seabird team are studying the attendance patterns of storm-petrels at breeding sites throughout their range, including offshore rocks within the California Coastal National Monument and the California Channel Islands, to inform management and conservation efforts of the species.

While the cryptic, nocturnal behaviors of the storm-petrels help them avoid predators at their nest sites, these behaviors also make it difficult for biologists to study them. To overcome these challenges, the WERC seabird team uses a combination of traditional and novel monitoring techniques.  In collaboration with researchers at Channel Islands National Park and California Institute for Environmental Studies, the team uses mist-nets to capture storm-petrels at known colony locations within the Channel Islands and generate a standardized catch-per-unit-effort metric that can be compared through time and across sites.

In addition to these traditional mist-netting methods, WERC researchers are collaborating with Conservation Metrics Inc. to use novel acoustic monitoring technology to record storm-petrels vocalizations at colony locations along the California Coastline. After researches from the WERC seabird team deploy the passive acoustic recorders in storm-petrel habitat for the duration of  nesting season, they hand the data off to collaborators at Conservation Metrics, Inc. who use machine learning algorithms to detect the frequency and timing of storm-petrel calls.  Understanding the nesting timing and locations of this threatened seabird species helps establish the scientific basis for future management, conservation, and monitoring efforts. The results of these studies will help inform the status and distribution of Ashy Storm-Petrels and other important seabird species off the California Coast and will provide land and wildlife managers with insight into effective, affordable, and repeatable methods for monitoring wildlife species.

Return to the Seabird Health and Adaptive Management home page

Below are other studies associated with this project. 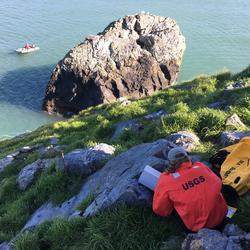 Dr. Josh Adams and his science team at WERC study seabird health and support adaptive management by quantifying abundance patterns and behaviors associated with habitats at sea, where seabirds spend the overwhelming majority of their lives. Adams’s team also employs conservation science to support resource managers on land, where seabirds are obligated to nest. His group provides scientific...
Learn More