Ecology and Conservation of Reptiles Active

This project improves our understanding of the ecology of reptiles in California and evaluates methods of managing landscapes and these imperiled species. In particular, Dr. Brian Halstead examines the distribution and demography of reptiles to understand factors that affect where they are found and how populations change. He further explores the relationships of reptiles with their abiotic and biotic environments to understand important components of their habitats, how they interact with prey, competitors, and predators in the environment, and how individual characteristics affect vital rates. Studies under this project improve our understanding of ecosystem structure, function, and processes; advance our understanding of how drivers influence ecosystem change; and encourage the application of science to enhance management, conservation, and restoration strategies for ecosystems.

Reptiles are a relatively poorly understood, and often maligned, group of animals.  Although amphibian declines have grabbed more headlines, 41% of evaluated reptile species were considered Near Threatened, Threatened (Vulnerable, Endangered, or Critically Endangered), or data deficient globally. The proportion of threatened species for aquatic reptiles was higher than for terrestrial reptiles (30% and 19% threatened, respectively), and as a taxon, snakes were relatively more data-deficient than other taxonomic groups. The majority of evaluated European snake species were in decline, though no single cause was evident (Reading et al. 2010).  Possible causes for decline include habitat loss or degradation, invasive species, contaminants, disease, overexploitation, and climate change. Although these are the primary cause of many documented declines, others remain enigmatic. Indeed, even when habitat is protected, human disturbance can cause the decline and extirpation of reptile populations. Until we better understand the causes for reptile declines, it will be difficult to ameliorate the threats reptile populations face. 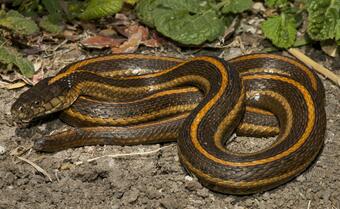 Reptile populations in California have not escaped widespread declines. The Central Valley is the only home to the largest gartersnake species—the giant gartersnake (Thamnophis gigas), which can be more than 5 feet long and weigh about 2 pounds. These “giants” have lost more than 90% of their historical tule marsh habitat to the draining of wetlands for agricultural and other uses. They primarily feed on aquatic prey, with contemporary diets of introduced species such as common carp, mosquitofish, bullhead catfish, silversides and all life stages of American bullfrogs. Introduced predators consume giant gartersnake neonates, and the effects of widespread use of pesticides and occurrence of heavy metals throughout the Central Valley have unknown effects on individuals and populations. Most extant giant gartersnake populations occur in a landscape dominated by rice agriculture, where they spend much of their time in irrigation ditches, and the trajectories of these populations remain unknown. Extirpation of a taxonomically and ecologically similar species, the viperine snake (Natrix maura) from rice fields in the Ebro Delta, Spain (Santos and Llorente 2009), is cause for concern for giant gartersnakes in agricultural habitats.

Island night lizards (Xantusia riversiana) are endemic to three of the Channel Islands (on Santa Barbara, San Nicolas and San Clemente) off the coast of Southern California. The island night lizard was listed by the Fish and Wildlife Service as a threatened species in 1977. Declines likely occurred with the introduction of ungulates and predators to the islands, but the lizards occur at high densities where appropriate habitat remains. Because of their previously unrecognized high densities and the protection of their current habitat, island night lizards were delisted in 2014. Nonetheless, much remains to be learned about the somatic growth and demography of island night lizards and two non-native lizards, southern alligator lizards (Elgaria multicarinata) and side-blotched lizards (Uta stansburiana), introduced to San Nicolas Island.

Reptiles aren’t only of conservation concern themselves; they can cause declines of other species when introduced to new locations or under certain circumstances. Understanding the interactions of reptiles with other species is an important component of improving management for rare or listed species. Both Yosemite National Park and Sequoia & Kings Canyon National Parks are putting forth great efforts toward the recovery of the mountain yellow-legged frog, a complex of two federally endangered species (Rana muscosa and R. sierrae). One of the primary causes of reintroduction failure is predation by mountain gartersnakes (Thamnophis elegans), and we are examining snake-frog interactions in alpine lakes to generate strategies to ameliorate the threat the snakes pose to reintroduced frogs as they familiarize themselves with their new environment. 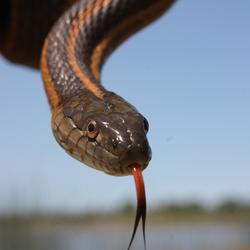 Large-scale conversion of wetland habitats to agricultural and other uses in the Bay-Delta and California’s Central Valley is the major threat to species that rely on these habitats.
link
August 8, 2016

Large-scale conversion of wetland habitats to agricultural and other uses in the Bay-Delta and California’s Central Valley is the major threat to species that rely on these habitats.
Learn More