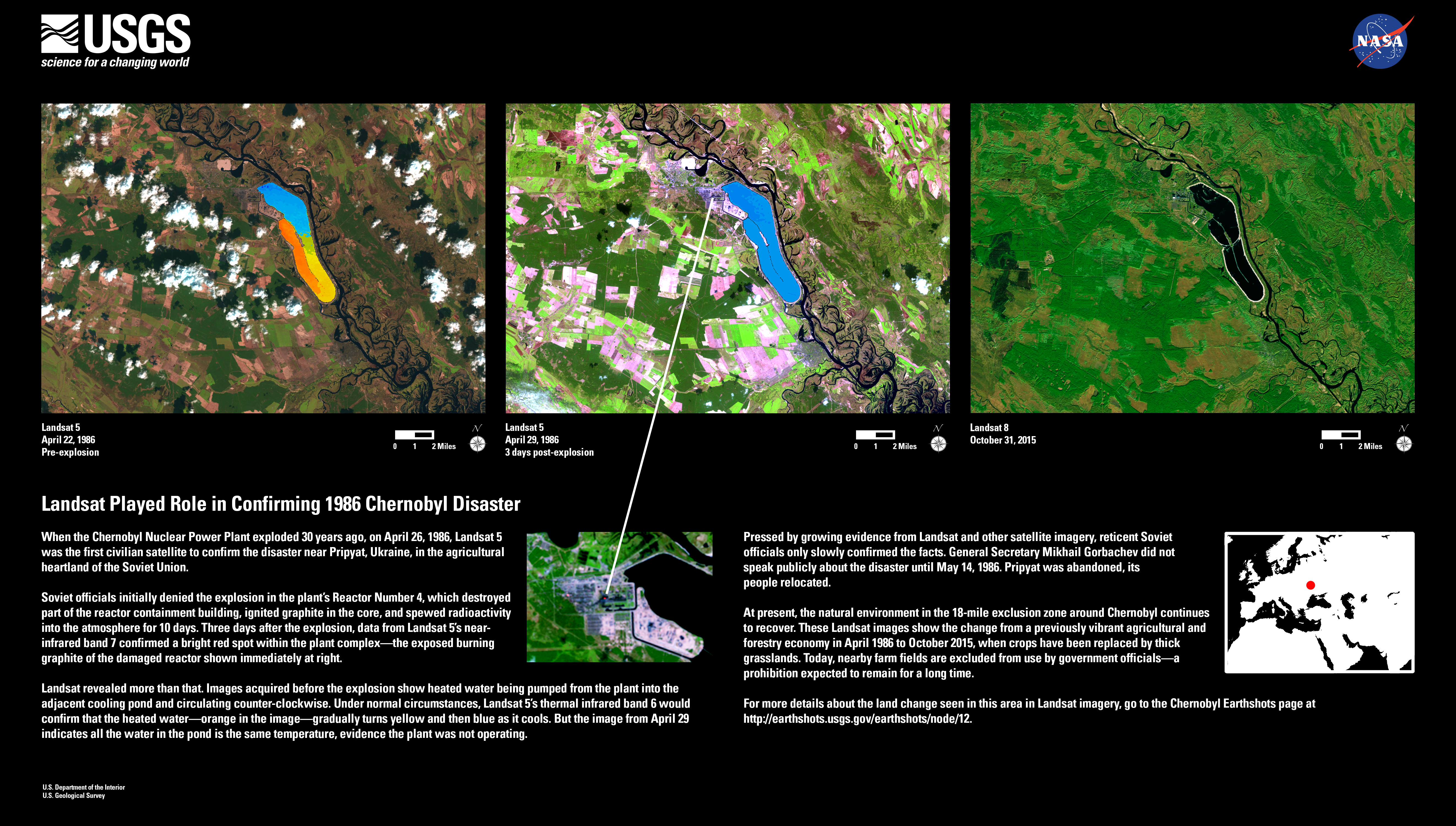 When the Chernobyl Nuclear Power Plant exploded 30 years ago, on April 26, 1986, Landsat 5 was the first civilian satellite to confirm the disaster near Pripyat, Ukraine, in the agricultural heartland of the Soviet Union.

When the Chernobyl Nuclear Plant exploded 30 years ago, on April 26, 1986, Landsat 5 was the first civilian satellite to confirm the disaster near Pripyat, Ukraine, in the agricultural heartland of the Soviet Union.

Soviet officials initially denied the explosion in the plants Reactor Number 4, which destroyed part of the reactor containment building, ignited graphite in the core, and spewed radioactivity into the atmosphere for 10 days. Three days after the explosion, data from Landsat 5's near-infrared band 7 confirmed a bright red spot within the plant complex—the exposed burning graphite of the damaged reactor shown immediately at right.

Landsat revealed more than that. Images acquired before the explosion show heated water being pumped form the plant into the adjacent cooling pond and circulating counter-clockwise. Under normal circumstances, Landsat 5's thermal infrared band 6 would confirm that the heated water—orange in the image—gradually turns yellow and then blue as it cools. But the image from April 29 indicated all the water in the pond is the same temperature, evidence the plant was not operating.

Pressed by growing evidence from Landsat and other satellite imagery, reticent Soviet officials only slowly confirmed the facts. General Secretary Mikhail Gorbachev did not speak publicly about the disaster until May 14, 1986. Pripyat was abandoned, its people relocated.

At present, the natural environment in the 18-mile exclusion zone around Chernobyl continues to recover. These Landsat images show the change from the previously vibrant agricultural and forestry economy in April 1986 to October 2015, when crops have been replaced by thick grasslands. Today, nearby farm fields are excluded from use by government officials—a prohibition expected to remain for a long time.

For more details about the land change seen in this area in Landsat imagery, go to the Chernobyl Earthshots page at https://earthshots.usgs.gov/earthshots/node/12.