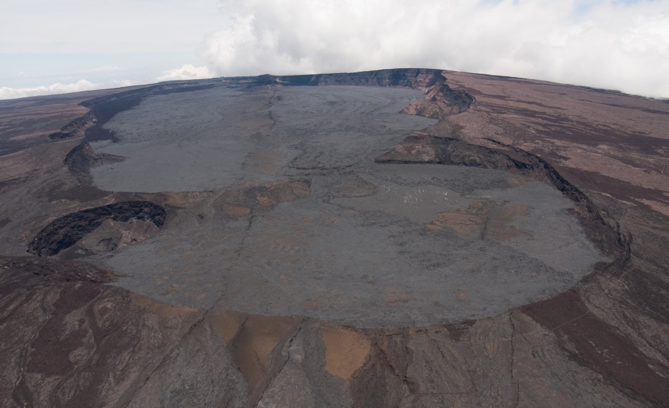 Mauna Loa's large summit caldera (Moku‘āweoweo) measures 6 by 2.5 km (2.8 by 1.6 mi), including the summit collapse pits, and is elongated in a northeast-southwest orientation. The caldera floor is about 180 m (590 ft) below the summit on the western rim (top right). The first accurate survey of the caldera was made in 1841, when it consisted of a nearly circular central pit about 240 m below the summit and two outer craters called "benches" to the north and south because they stood 180 m (590 ft) above the central pit floor. Eruptions in the 19th century and early 20th century gradually filled in the central pit and completely covered the north bench by 1940 and the south bench by 1949. Since then, lava flows erupted from vents cross cutting Moku‘āweoweo have spread out across both South Pit and North Pit. One of the flows erupted in 1949 spread through South Pit and 9 km (5.6 mi) down the southeast side of the volcano.