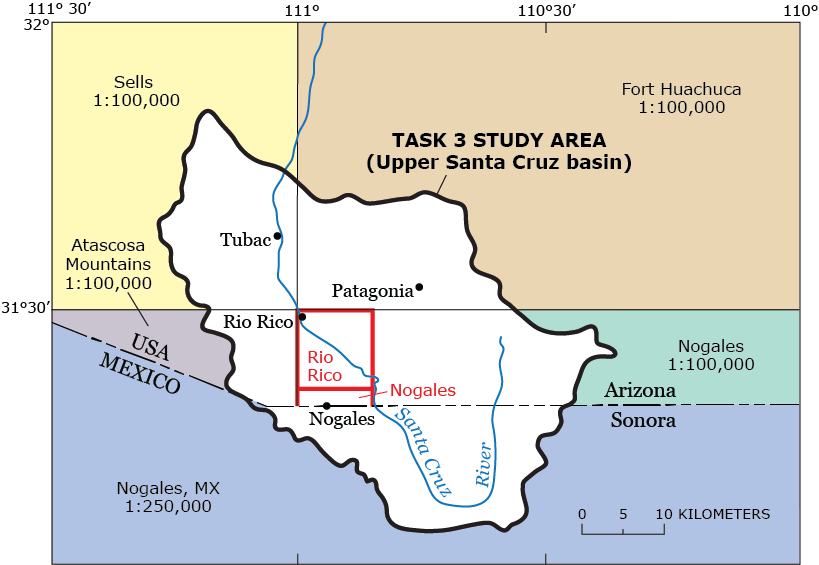 The upper Santa Cruz basin study area in Arizona extends over the Sells, Fort Huachuca, Nogales and Atacosa 1:100,000-scale quadrangles. To gain a better understanding of the basin, we began the project by conducting detailed geologic mapping of the Rio Rico and Nogales (Arizona) 1:24,000-scale quadrangles (outlined in red), and we are currently preparing the map report for publication. Through this mapping, we have significantly re-defined the stratigraphy of the Miocene Nogales Formation, and have characterized the formation by analyzing samples for geochronology, porosity, saturated hydraulic conductivity, physical properties, and fabric analyses based on petrographic studies. We are also conducting integrated geophysical studies in the quadrangles by analyzing airborne transient electromagnetic data, high resolution aeromagnetic data, gravity data, and magnetic susceptibility data collected within the study area. These data are critical in defining the subsurface basin geometry, hydrostratigraphic units, and the location of concealed faults which may control groundwater flow. The major product for the overall project will be a regional-scale geologic map of the Arizona part of the upper Santa Cruz basin (shown in white).