The value of US coral reefs for risk reduction - American Samoa 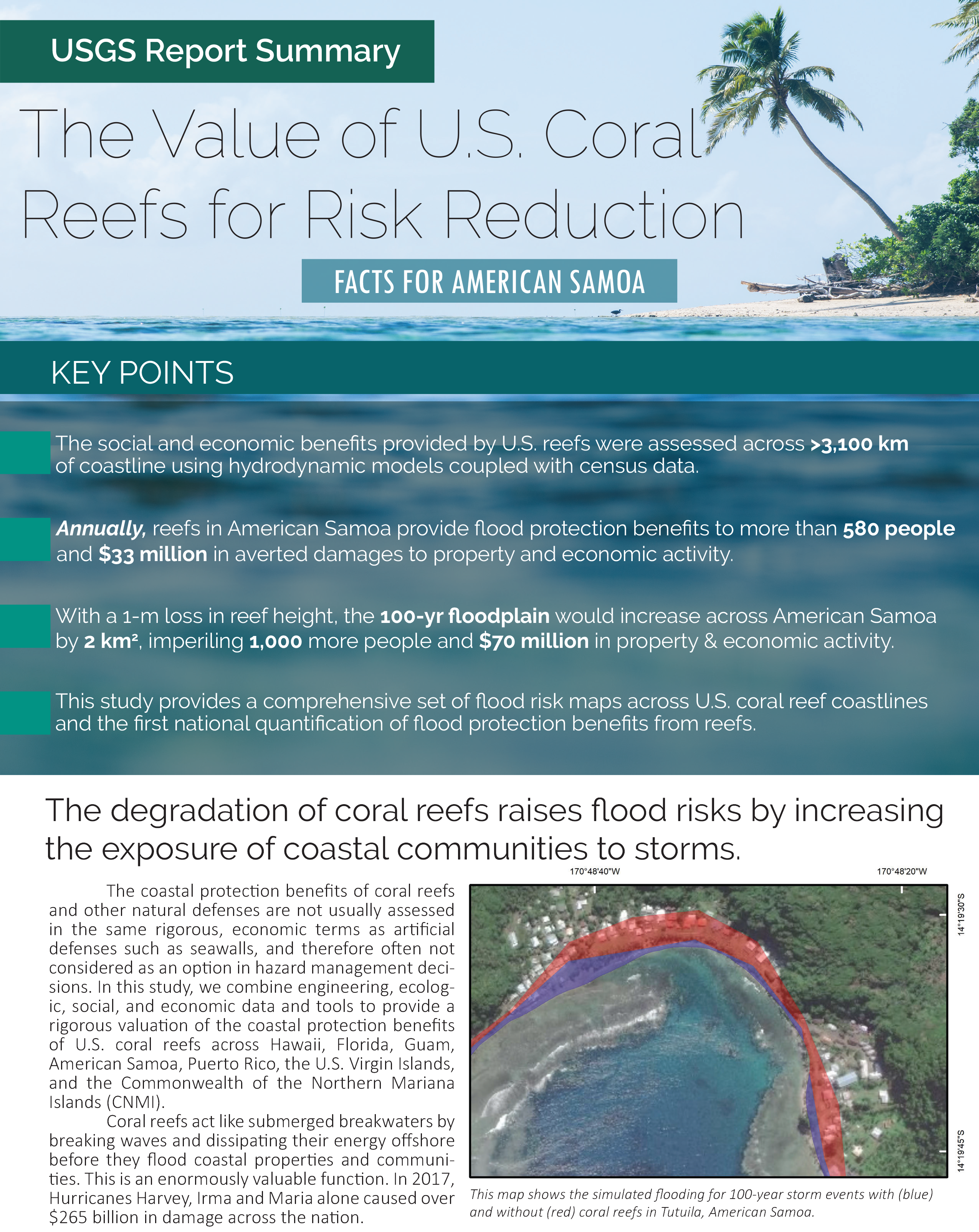 The value of U.S. coral reefs for risk reduction: Facts for American Samoa

The degradation of coral reefs raises flood risks by increasing the exposure of coastal communities to storms.

The coastal protection benefits of coral reefs and other natural defenses are not usually assessed in the same rigorous, economic terms as artificial defenses such as seawalls, and therefore often not considered as an option in hazard management decisions. In this study, we combine engineering, ecologic, social, and economic data and tools to provide a rigorous valuation of the coastal protection benefits of U.S. coral reefs across Hawaii, Florida, Guam, American Samoa, Puerto Rico, the U.S. Virgin Islands, and the Commonwealth of the Northern Mariana Islands (CNMI).

Coral reefs act like submerged breakwaters by breaking waves and dissipating their energy offshore before they flood coastal properties and communities. This is an enormously valuable function. In 2017, Hurricanes Harvey, Irma and Maria alone caused over $265 billion in damage across the nation.

[See pamphlet page 2] In this report, we demonstrate that coral reefs provide the U.S. with more than $1.8 billion dollars in flood protection benefits every year. They reduce direct flood damages to public and private property worth more than $800 million annually, and help avert other costs to lives and livelihoods worth an additional $1 billion. Coral reefs annually protect $184 million worth of buildings and economic activity in Puerto Rico, $675 million in Florida and $836 million in Hawaii.

These are not ‘back of the envelope’ numbers. Flood risk was assessed using sophisticated hydrodynamic models and more than 60 years of hourly wave data for U.S. coral reef coast lines – a total area of over 3,100 km (>1,900 miles) of shoreline. We developed flood risk maps projecting the extent and depth of flooding that would occur across a range of storms from the more commonly occurring to the catastrophic, with and without the top 1-m of coral reefs. These flood risk maps were combined with the latest information from the U.S. Census Bureau and the Federal Emergency Management Agency to identify people and properties at risk – and benefiting from the presence of coral reefs – in each location.

Rigorously valuing coral reef benefits in this way is a key step toward mobilizing resources to protect them. These maps and values can be used to inform:

The Value of U.S. Coral Reefs for Risk Reduction
Discover the social and economic benefits provided by other U.S. reefs