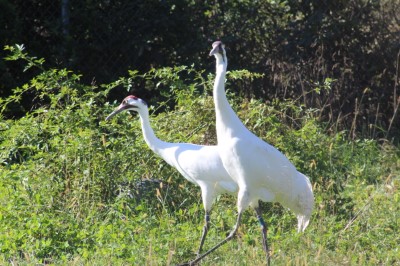 Recently a long-time resident of Patuxent Wildlife Research Center (now part of the Eastern Ecological Science Center) made the Washington Post. A color photograph of "Zinc" and "Mrs. Zinc" was featured in a story about naming animals. Zinc received his unique name when he was less than one-year-old. As young animals sometimes do, Zinc ate some bright shiny objects that were metal pieces left accidentally in his pen. After two laparoscopic surgical procedures to remove all this metal and after treatment for elevated blood levels of zinc from these pieces of metal, the whooping crane was awarded the moniker of "Zinc." This whooping crane and its mate lived for 25 years at Patuxent Research Refuge before finding a new home at the Smithsonian captive breeding center in Front Royal, Virginia.