On May 24, 1869, John Wesley Powell and nine other men set off on a momentous expedition into unexplored territory to take scientific measurements and map the the Colorado River. This year, on the sesquicentennial of Powell’s adventure, a team of academics, USGS scientists, authors, artists, cartographers, and journalists embarked on the same day, following the same path, for a 70-day journey to celebrate and advance the scientific and cultural discoveries that Powell made 150 years ago. Jessica Lucido, a civil engineer and program manager for the Water Resources Mission Area, will join the expedition from July 5-10, traveling on the Colorado River from Lake Powell, Colo., to Lee’s Ferry, Ariz. (the entrance to the Grand Canyon).

John Wesley Powell served as the second director to the USGS (1881-1894) and spearheaded our streamgaging program 130 years ago. While he lost four men and two boats during his 95-day journey from Green River, Wyo., to the Virgin River near the Arizona-California border, he succeeded in recording some of the earliest known maps, data, topographic and geologic measurements, and documentation of Native American culture. The 1869 expedition greatly advanced the understanding of the “Great Unknown” of the western U.S. and its resources, climate, and community.

The 2019 Sesquicentennial Colorado River Exploring Expedition (SCREE) offers the rare opportunity to revisit Powell’s journey of exploration and documentation with an eye toward modern issues of increased populations, land-use change, strained water allocations, and climatic uncertainties. SCREE notes that “this expedition is not a reenactment of the past, but rather a re-envisioning of our future that engages traditional, historic, and contemporary river ecosystem perspectives to derive proactive management strategies, integrating community values, science, and humanities through an analysis of culture, informed management, and traditional ecological knowledge.” The 70-day, 1,000-mile expedition, led by the University of Wyoming in conjunction with other partners, began on the Green River below Fontenelle Dam, WY, and will conclude at Pearce Ferry, Ariz. on the Colorado River near Lake Mead.

28 USGS scientists are participating in various legs of the Expedition and conducting scientific activities along the way. Jessica Lucido will be representing the Water Resources Mission Area’s hydrologic monitoring efforts during the expedition. As acting Deputy Program Manager for the USGS National Water Information System (NWIS), Jessica oversees the functionality and modernization of this mission critical system that manages and delivers much of the USGS’s water data used for flood forecasting, drought monitoring, and managing water resources. Jessica leads the effort to transform NWIS into a robust and scalable IT water infrastructure that will support new data and sensor networks, feed information forward into the National Water Model, and have the flexibility to incorporate future data needs and innovations. The SCREE expedition, which will pass several landmark streamgages with 100+ years of data, provides an opportunity to highlight USGS advances in water monitoring (like rapid deployment gages, real-time water-quality monitoring, and advanced sensor technologies) and to promote our efforts to develop a next generation water information system.

Follow all the USGS scientists on the SCREE expedition and other Powell150 activities: 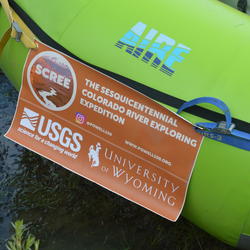 150th Anniversary of the 1869 Powell Expedition

Welcome to the Powell150 education and outreach site!

150th Anniversary of the 1869 Powell Expedition

Welcome to the Powell150 education and outreach site!