Nitrogen and phosphorus are essential nutrients—yet too much of a good thing is not always a good thing. Scientists are investigating nutrient pollution down the Mississippi River.

In the “Land of 10,000 Lakes,” Minnesota relies on clean water for recreation, drinking water, abundant fish and wildlife habitat, and productive agriculture.

“Fishable and swimmable waters are an important part of our economy, yet high levels of nutrients in our waters can impact these activities,” said David Wall, a researcher at the Minnesota Pollution Control Agency. “We have over 500 lakes and quite a few rivers impaired due to phosphorus. When we have nutrient problems here, they can leave Minnesota's borders and flow downstream to people in other cities that need clean water, too.”

The Gulf is an important commercial and recreational fishery, providing over a billion pounds of commercial fishery landings each year, which yield an estimated value of $662 million. Hypoxia can affect this aquatic life by reducing growth and reproduction.

To prioritize mitigation actions, it is critical to better understand nutrient sources. Identifying these sources is a complicated task because, at more than 1.2 million square miles, the Mississippi River Basin is the fourth largest basin in the world. It covers close to 40 percent of the lower 48 States. There are 31 States that drain, via the Mississippi River Basin, into the Gulf of Mexico, and nutrient sources are found throughout the basin.

“Fertilizers used on crops, air pollution, and manure are some of the major sources of nitrogen transported from the Mississippi River Basin to the Gulf of Mexico,” said Michael Woodside, a hydrologist with the U.S. Geological Survey (USGS). 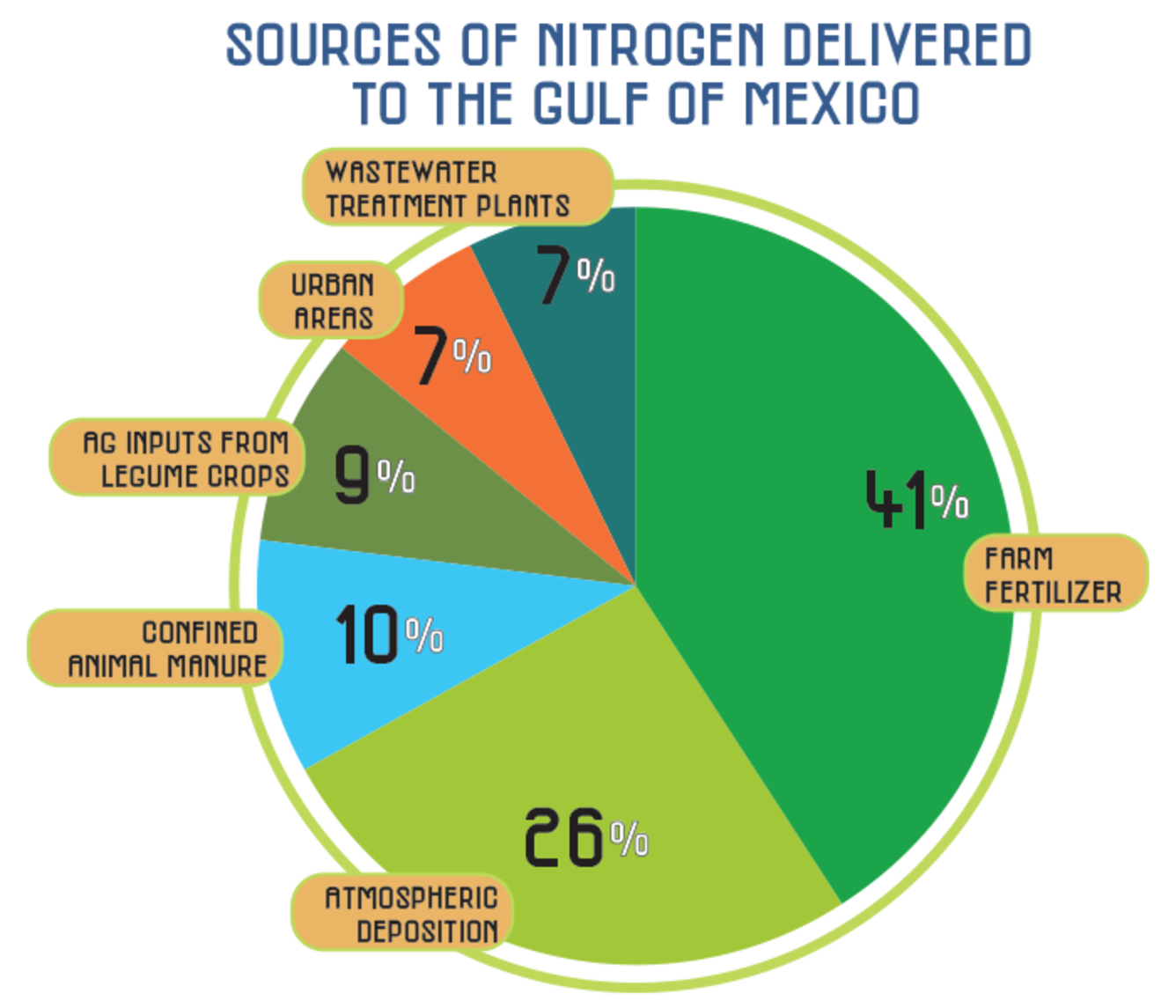 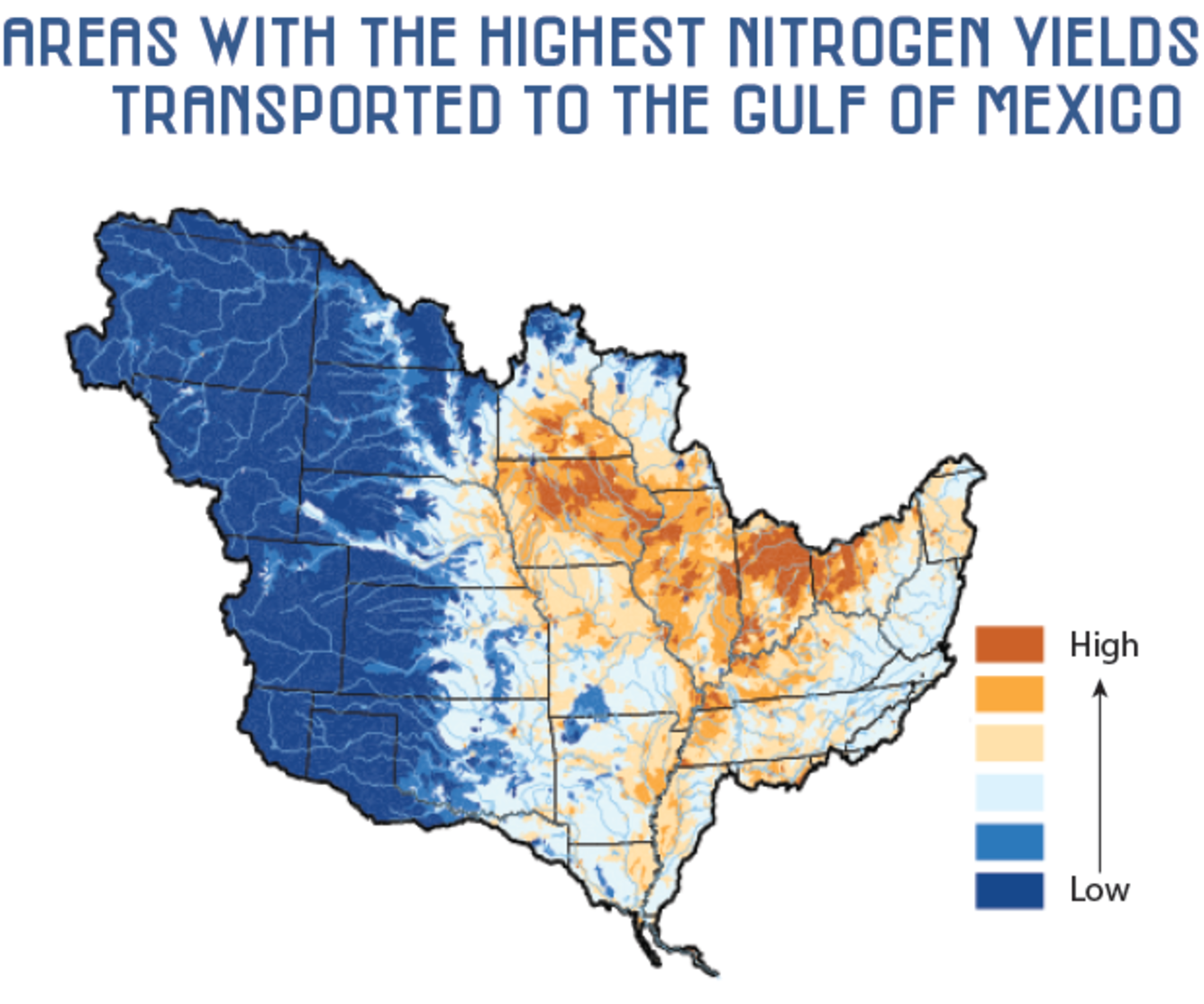 One of the tools Minnesota officials use to compare watershed nutrient loads is the Spatially Referenced Regression on Watershed Attributes model, or SPARROW model, developed by the USGS.

“Minnesota used USGS SPARROW model results, along with other data, to inform our State-level nutrient reduction strategy and to prioritize watersheds,” said Wall. “Additionally, we used the model in combination with other modeling tools to help set goals and targets for nutrient reductions and to evaluate load reductions expected at the State borders.”

“There are two web-based applications for exploring SPARROW results,” said Woodside. “First is a mapper that helps identify nutrient hotspots, the largest sources of nutrients, and how they move downstream. Second is a decision support tool that allows users to zoom into any stream or reservoir to learn about nutrient sources. The tool can be used to provide science-based information for questions like, ‘How much will nutrients be reduced to my reservoir if fertilizer inputs in the watershed are reduced by 20 percent?’”

Maps tracking the sources and quantities of nutrients to all of the Nation’s estuaries and Great Lakes are available online.

Information gathered using SPARROW is a critical piece of the puzzle, but only one piece. SPARROW helped Minnesota make great strides by identifying priority watersheds and beginning nutrient reduction actions, but moving forward requires a collaborative effort from numerous partners.

The Mississippi River/Gulf of Mexico Watershed Nutrient Task Force, comprising States and Federal agencies such as the USGS, works collaboratively to minimize the nutrients entering the Mississippi River and reduce the size of the hypoxic zone in the Gulf. The task force is reaching out to new partners, such as universities, agricultural organizations, and communities, to address science, social science, and outreach needs.