A Common Tern (Sterna hirundo) fitted with a new style of radio harness traveled over 1850 miles from its breeding grounds on Poplar Island, Maryland, to the island of Aruba, off the coast of Venezuela.

The period from fledging through first breeding for waterbird species such as terns is of great interest to researchers and conservationists both because young birds rarely return to their natal colonies during their first year and are more likely to suffer mortality during migration compared to older, more experienced birds. However, this period remains understudied due in large part to the difficulty of marking growing juveniles with radio transmitters that remain attached for extended periods.

To tackle this challenge, in the past year scientists from the USGS Eastern Ecological Science Center (EESC) worked to design a harness that would allow them to deploy radio transmitters on both adult Common Terns (Sterna hirundo) as well as juvenile birds. EESC recently published findings from a pilot study that showed using flexible materials allowed for harness attachment onto chicks of a captive species with no apparent impacts on growth.

EESC scientists collaborated with biologists from US Fish and Wildlife Services and Maryland Department of Natural Resources to mark 18 adult and 24 juvenile Common Terns with small radio-transmitters using this newly-developed approach in summer 2021. Terns marked with radio-transmitters also carry two leg bands: a standard metal band provided by the USGS Bird Banding Lab, a national program that is part of Eastern Ecological Science Center at Patuxent Research Refuge, and a plastic band that allows individual birds to be identified visually without needing to recapture them.

Recently, one of these marked terns was seen in Aruba by a community scientist! This bird was first banded as a chick in 2017 as part of long-term research on waterbird colonies on Poplar Island, an environmental restoration site in the Chesapeake Bay. After being recaptured and fitted with a radio transmitter in June 2021, it traveled over 1850 miles to Aruba, where it will either remain until next spring or rest before continuing migration to wintering grounds as far south as Peru. The report from the community scientist in Aruba is especially helpful because the radio-transmitter tags used in this project rely on receivers to gather detections, and no such receivers are located in the area where the bird was seen.

Information gained from tracking the movements of these and other Common Terns will improve understanding of how individuals breeding on Poplar Island use habitat at local and global scales. Ultimately, the data gathered through this project will help inform habitat management and conservation efforts for this Common Terns, which are listed as endangered in Maryland. 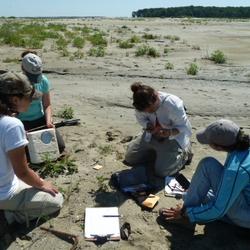 BackgroundWhile the period from fledging through first breeding for waterbird species such as terns (e.g., genus Sterna, Sternula) is of great interest to researchers and conservationists, this period remains understudied due in large part to the difficulty of marking growing juveniles with radio transmitters that remain attached for extended periods.MethodsIn an effort to facilitate such research
By
Ecosystems, Eastern Ecological Science Center, Patuxent Wildlife Research Center