New USGS research indicates that streamflow in the Upper Colorado River Basin (UCRB) is decreasing by about 5% per degree Fahrenheit as a consequence of atmospheric warming, causing a 20% reduction over the past century.

This study, recently published in Science, also finds that projected precipitation changes in the UCRB – where water demand already exceeds sustainable supply – are highly uncertain, and might (at best) partially ameliorate but not completely reverse the drying effect of the warming, while possible precipitation decreases could make matters worse.

Water produced by the UCRB is used by 40 million people and supports economic activity in the U.S. Southwest estimated at $1.4 trillion annually. Atmospheric warming and recent drought increase concern about the sustainability of this water resource in the changing climate, but the response of river discharge to warming has been highly uncertain. Previous investigations have been slow to adopt the last two decades of satellite-based observations of Earth properties – surface albedo and surface radiation in particular – and have produced a wide range of sensitivity estimates, ranging from 1% to 8% streamflow reduction per degree Fahrenheit. This uncertainty complicates the task of planning for increasingly likely supply shortfalls.

The USGS study used a new model and satellite-based observations to reproduce and explain the mechanism of flow reduction: Surface albedo (reflectivity) determines how much solar radiation is absorbed by the land surface and available to drive evapotranspiration. Albedo is highly sensitive to snow cover, which is an efficient reflector of solar radiation. As temperatures rise, more precipitation falls as rain instead of snow, and what snow does fall melts earlier in the year. The loss of snow exposes the land to increased solar radiation. The absorbed radiative energy is dissipated by further heating of the lower atmosphere and increased evaporative cooling. The increased evaporation consumes water that would otherwise run off into the river, reducing the amount of streamflow.

This study was carried out by the USGS Water Resources Mission Area in collaboration with the National Oceanic and Atmospheric Administration’s (NOAA’s) Geophysical Fluid Dynamics Laboratory in Princeton, NJ. 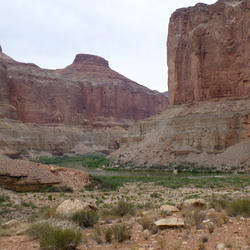 Declining snow cover is playing a key role in decreasing the flow of the Colorado River, “the lifeblood of the Southwest,” by enabling increased evaporation. As the warming continues, increasingly severe water shortages are expected.
By
Water Resources
link
March 29, 2020

Declining snow cover is playing a key role in decreasing the flow of the Colorado River, “the lifeblood of the Southwest,” by enabling increased evaporation. As the warming continues, increasingly severe water shortages are expected.
Learn More
March 13, 2020