Declining snow cover is playing a key role in decreasing the flow of the Colorado River, “the lifeblood of the Southwest,” by enabling increased evaporation. As the warming continues, increasingly severe water shortages are expected.

The Colorado River Basin is the source of water for 40 million people in seven states of the U.S. Southwest and two states in Mexico. Its water irrigates over 5 million acres of cropland and supports economic activity exceeding one trillion dollars annually. Users have claims on every drop of water, so there is no slack in the system.

The lion’s share of the streamflow of the Colorado River is produced in the Upper Colorado River Basin (UCRB), which is the area upstream of Lees Ferry, Ariz., and Lake Powell. Over the course of the last century, the naturalized flow from the UCRB has decreased by about 20 percent. (Naturalized flow – the available water supply – is the flow that would occur in the absence of human water use, diversions, and storage in reservoirs. In the rest of the text below, the use of the word “flow” will refer to naturalized flow.)

The changes in annual UCRB precipitation during the last century have been relatively small compared to the changes in flow, although there have been variations in how precipitation is distributed across the basin and throughout the year. Temperatures have been rising, with a basin-average increase of about 1.4 degrees Celsius (2.5 degrees Fahrenheit) over the last century. There is little doubt in the scientific community that the warming accounts for part of the decreasing flow, but experts have not been able to agree on just how sensitive flow is to temperature. For a one-degree Celsius (1.8-degree Fahrenheit) rise in temperature, previous studies have estimated the resulting decrease in flow to be anywhere between 2 percent to 15% – a substantial degree of uncertainty when planning for potential water supply shortages.

The Physical Processes at Work in the Basin

At any location in the UCRB, the storage of water in the snow pack and below the ground surface varies continuously over time, with storage increasing with periods of precipitation and decreasing due to evaporation from the ground surface, transpiration by plants, sublimation of snow, surface runoff, and baseflow from groundwater. Evaporation requires energy, which ultimately comes from the sun. But only a fraction of the solar radiation that reaches the basin is absorbed by the ground; the remaining fraction is reflected back upward. The fraction reflected is called the albedo. Albedo depends strongly on how much of the ground is covered by snow. The water that is not lost to evaporation eventually becomes the surface runoff and baseflow that feed the river. All of the processes just mentioned can be described by equations on the basis of the physical principles of conservation of mass and energy and hydrologic theory.

With rising temperatures, more of the UCRB precipitation falls as rain instead of snow, and what snow does fall melts off earlier in the year. Earlier snow melt is significant from a water-supply standpoint, because it causes runoff from the basin to come earlier in the year, but the largest demand for water downstream is during the summer. Early snow melt doesn’t reduce the overall amount of water flowing down the river over the course of the year, but it does change its distribution in time.

However, there is another effect of the waning snow cover that has a substantial impact on the total amount of water coming down the river. Snow cover, because of its high albedo, is a shield that reduces the amount of solar radiation absorbed by the basin. In years when the snow cover is low, more radiation is absorbed, and that extra energy drives more evaporation. Conversely, an extensive cover of snow suppresses evaporation. When more water is consumed by evaporation, less remains behind to supply the river, and the flow of the river decreases, as does the availability of water to the users downstream.

Putting a Number on the Sensitivity of Flow to Warming

Knowing that a river’s flow decreases with warming is useful. But knowing how much is more useful: for one degree of basin-average warming, how much does the flow of the river decrease?

The answer to this question depends partly on how the warming is distributed in space and time. To have a uniform benchmark, hydrologists often refine the question above to the following: For one degree of warming, assumed constant throughout the basin and throughout the year, how much does the flow of the river decrease?

USGS scientists constructed a monthly water-balance model that represented the various physical process at work in the basin, with consideration of how those processes vary from location to location in the basin and from month to month and year to year. The model parameters were chosen so the model would reproduce the historical flow of the river as accurately as possible. The relation between albedo and snow amount in the model was developed on the basis of satellite observations of albedo.

The model was first run using estimated historical distributions in space and time of precipitation and atmospheric temperature. The model was then run a second time, in exactly the same manner, but with the temperature increased everywhere in space and time by one degree Celsius. The difference between the mean river flow between these two runs, divided by the mean river flow for the first run, yields an estimate of the sensitivity of the basin to warming: it estimated that the flow decreases by 9.3% for a one-degree Celsius warming (5% for a one-degree Fahrenheit warming). It was also found, on the basis of the model, that the decrease of albedo due to loss of snow cover upon warming accounted for most of flow decrease; without the snow-albedo effect, the decrease would only be 3.1% per one-degree Celsius (1.7% per degree Fahrenheit) of warming.

Previous reports have placed the sensitivity in the range of a 2 to 15% decrease in flow per degree Celsius of warming. The range of uncertainty in this quantity stems from different approaches to its estimation.

The lower estimates (2 to 9% per °C) were obtained by use of models by perturbing the historical temperature in the same manner we used, but the models that produced these estimates differed in many ways. Notably, some of them did not explicitly account for the change in energy availability associated with changing snow cover – and none of them analyzed the contribution of this effect. A reasonable hypothesis is that the estimates significantly lower than 9 percent can be explained by the absence of the snow-albedo effect in the previous models.

Continued warming in the UCRB will drive further loss of river flow. Another factor, which might add or subtract available water, will be changes in precipitation, which could either increase or decrease. Considering the effect of warming alone, and using estimates of the rate of warming from global climate models, it is estimated that by 2050 the flow will have decreased by 14 to 31%, relative to the historical average. When the possible changes in precipitation are included, the range of this estimate widens, with losses as great as 40% and, at the other extreme, a flow gain of 3%.

The failure to fully account for the physical processes explaining the sensitivity of flow to warming has, until now, made the translation of climate-change temperature projections into flow projections highly uncertain. This new model combines physics with a century of on-the-ground climate and hydrologic measurements, as well as decades of measurements from satellites, to understand how water moves into and out of the Colorado River basin. This new method will enable more confident projections into the future, especially in other snow-dominated river basins, allowing for better planning and management of UCRB water resources. 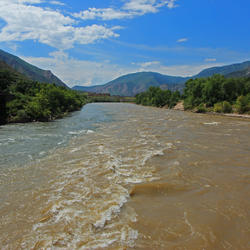 The Next Generation Water Observing System (NGWOS) provides high-fidelity, real-time data on water quantity, quality, and use to support modern prediction and decision-support systems that are necessary for informing water operations on a daily basis and decision-making during water emergencies. The headwaters of the Colorado and Gunnison River Basins provide an opportunity to implement NGWOS in a...
By
Water Resources
link
April 26, 2021

The Next Generation Water Observing System (NGWOS) provides high-fidelity, real-time data on water quantity, quality, and use to support modern prediction and decision-support systems that are necessary for informing water operations on a daily basis and decision-making during water emergencies. The headwaters of the Colorado and Gunnison River Basins provide an opportunity to implement NGWOS in a...
Learn More

New USGS research indicates that streamflow in the Upper Colorado River Basin (UCRB) is decreasing by about 5% per degree Fahrenheit as a consequence...