When U.S. Geological Survey (USGS) biologist Leanne Hanson answered a “call” in 2009 for interested USGS scientists to learn to operate drones, she knew it would be uplifting work—literally. Recently, as a newly trained and certified pilot, she spent a week flight-testing a small unmanned aircraft system, also called an sUAS1 or simply a drone, as a non-invasive means of conducting aerial counts o

The collaborative project Hanson is working on is called “proof of concept”—meaning that they are testing the drones to see if they will be an effective means of conducting aerial counts of skittish creatures like migrating sandhill cranes.

In a demonstration of the utility of military technology to scientific research, the U.S. Army transferred 15 decommissioned Raven A sUASs to the USGS Unmanned Aircraft Systems (UAS) Project Office for use in natural resource field projects. One of those projects involves Hanson and the sandhill cranes that migrate through the Monte Vista National Wildlife Refuge in central Colorado’s San Luis Valley.

In the first application of the Raven system to a natural resource management need, the USGS and U.S. Fish and Wildlife Service (FWS) are comparing the sUAS video imagery with simultaneously collected data from ground-based counts to estimate the population of sandhill cranes migrating through the San Luis Valley. Cranes are large, upright birds (up to 4 ft tall) that move through the refuge in early spring. The birds can be counted while aggregated in this important “staging area” on their migratory route.

Typically, Hanson says, fixed-wing aircraft are used to conduct surveys of everything from vegetation cover to wildlife populations. This is an expensive and somewhat risky practice, but has been the only feasible way of getting accurate information without field staff spending hours trying to collect data on the ground. In the case of sandhill cranes, which spread out over several square miles of staging area, aerial surveys are the only viable way to obtain reliable population estimates.

“Basically, if the drones don’t scare the birds and the imagery is clear enough for counting cranes, the drones can quickly cover more territory and see more ‘at a glance’ than field personnel on the ground. That not only saves time, money, and fuel, but could also generate more precise estimates,” says Hanson. “Plus, some places are just difficult to access on foot, while a drone can simply fly in.”

The FWS, which manages the Monte Vista National Wildlife Refuge, hopes sUASs use will prove to be a safer (for both birds and low-flying pilots) and more cost-effective means of conducting migratory bird population assessments, with the least risk of disturbing migrating birds.

Questions the crane study is designed to answer are: 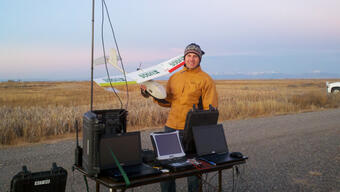 Hanson and the project team flew the Raven at various altitudes, starting at their approved maximum of 400 ft above ground level, then decreasing each subsequent flyover by 50 ft until they reached the nominal altitude of 150 ft, the minimum height allowed in the Federal Aviation Administration’s Certificate of Authorization [see box below, How sUASs Work]. Simultaneously the team recorded for each flight (1) any disturbance to the birds and (2) the Raven’s height above ground in order to identify correlations between the two. They also tested the efficacy of each type of camera, since only one can be mounted at a time on the drone.

Although the pilot study is not yet completed, preliminary results are promising.

“We were amazed at the image clarity using the NADIR [down-looking] infrared camera at 200 ft above ground level. We located roosting cranes that our ground-counters didn’t know were there—just one example of how we can improve population counts using this technology,” says Hanson. “Also, early morning, low-light flights are too dangerous for manned aircraft, but by using sUASs, we can extend the short window of time we have during the crane migration to obtain good population estimates at ideal times.”

The estimates are used for a variety of management decisions, from setting hunting “bag limits” for the year to how refuges manage their lands and waters.

The UAS Project Office and FORT are planning other diverse uses of the sUAS technology. Some of the projects in the works include:

Over the course of these studies, scientists will learn which of these applications will benefit most from using drones such as the Raven A, what species can be detected with the cameras, and the efficacy of this method for aerial surveying in different environments. Many other tests are being conducted to learn how field research can be enhanced, while saving staff time and other costs, by obtaining a bird’s-eye view from a drone. 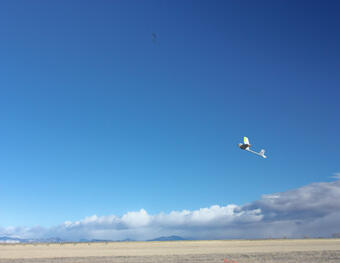 For each specific use of sUASs, the operating pilots must first obtain a Certificate of Authorization, or "COA," from the Federal Aviation Administration (FAA) and file a flight plan. sUAS flights use aeronautical charts for mission planning just like other aircraft, and sUASs need FAA approval for night flights.

For a COA, each flight requires four trained and certified pilots: one to remotely fly the plane, one "mission controller," and two observers. The mission controller works with the software to ensure that the sUAS operations conform to both the flight plan and the stipulations of the COA. One of these stipulations is that the drones must remain in the line of sight of trained observers. Therefore, the two observers watch while the flights take place, ensuring that there is no conflict between the sUAS and other aircraft or birds flying in the area.

Pilots outfit the sUAS with either an electro-optical or an infrared camera, which is housed in the nose of the vehicle (its "payload"). The sUAS is hand-launched, whereupon the pilot uses a hand-held flight controller to view what the sUAS-mounted camera "sees" and control the Raven’s flight. Meanwhile, the mission controller monitors the flight onscreen using special software that reads geographic information system (GIS) data and monitors the global positioning system (GPS) signal given off by the aircraft. When the flight is completed, no special landing area is required; the drone is directed by the pilot to go into a deep stall and "lands" by dropping to the ground and breaking apart in an engineered way to absorb impact and protect the payload (Raven RQ-11A sUAS: USGS Training Exercise video). After landing, it is easily reassembled for its next flight. 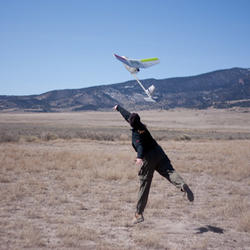 Small Unmanned Aircraft Systems (sUAS) are an emerging technology which may result in safer and improved methods to conduct wildlife surveys. The objective of this task is to test the capabilities of various cameras and sensors onboard a small Unoccupied (or unmanned) Aircraft System (sUAS) to determine if they are a useful and effective tool to inventory various flora and fauna important to USGS...
By
Fort Collins Science Center
link
August 18, 2016

Small Unmanned Aircraft Systems (sUAS) are an emerging technology which may result in safer and improved methods to conduct wildlife surveys. The objective of this task is to test the capabilities of various cameras and sensors onboard a small Unoccupied (or unmanned) Aircraft System (sUAS) to determine if they are a useful and effective tool to inventory various flora and fauna important to USGS...
Learn More