A century of ranching severely damaged Santa Rosa Island’s rich plant diversity. A new study finds that native plant species are recovering after cattle, pigs, deer, and elk were removed from the island.

About thirty miles off the coast of Santa Barbara, California, the foggy ridges of Santa Rosa Island rise from the ocean.  It is part of the California Channel Islands, a group of islands that have been described for their high levels of biodiversity as the Galapagos of California. Five of the islands, including Santa Rosa, make up Channel Islands National Park, established in 1980.

The Channel Islands are home to hundreds of native plant species, including 281 endemics (species found nowhere else—many of these found only on a single island) and 14 federally threatened or endangered species. Endemic animal species including the island fox, the island scrub jay and the island night lizard, also call the Channel Islands home. USGS scientist Dr. Kathryn McEachern has studied the rare plants of Santa Rosa Island for decades. To her, plants are storytellers.

“Each plant has a story to tell us about how it experiences its environment,” she says. “By looking at several different species in the same place over time, I can have them tell me what it is that they're missing in their environment and what about the environment is going well for them.”

When the stories of many different plants are put together, the big picture story of the environment comes into focus. For the native plants of Santa Rosa Island Dr. McEachern studies, the emerging story is a hopeful one: a newly published study has shown the island’s flora is recovering after the removal of introduced ranch animals.

The Channel Islands are famous for their plants and foxes today, but the islands have also been home to people for thousands of years—the oldest known human remains in the Americas, dating back about 13,000 years were found here.  Later, the Chumash people lived on the three largest of the Channel Islands, taking advantage of the abundant marine resources.

In the 1800s, European settlers introduced ranching to the California Channel Islands, beginning with sheep and largely switching to cattle in the early 1900s. Pigs, elk and deer were also introduced for recreational hunting.  Then, starting in the mid-20th century, the National Park Service took over the management of the northernmost islands, eventually establishing Channel Islands National Park. Santa Rosa Island was purchased by the National Park Service in 1986.

The ecosystem the Park Service inherited had, by that point, been dramatically transformed by livestock and game animals (herbivores). Since the Channel Islands had lacked any native large herbivores for at least 10,000 years, the native plants were not well-adapted to the trampling, grazing and browsing by the introduced animals. Native shrubs and trees were replaced by invasive annual grasslands and bare ground. The cloud forests that once grew on ridgetops were largely destroyed. When USGS scientists surveyed Santa Rosa Island in the mid-1990s, they were unable to locate the majority of the rare and endemic plant species once found there. The native plant species that remained, hung on in areas inaccessible to grazers, such as steep canyon walls, ledges and cliff faces.

Islands are often known for their biodiversity because isolation drives the evolution of new species. Unfortunately, that same isolation also makes island species extremely vulnerable. The majority of human-driven extinctions have occurred on islands, most of those attributed to the impacts of exotic species. Though their isolation makes islands vulnerable, it is also much easier to remove non-native species than it typically is on the mainland. That means islands are excellent laboratories for studying what happens when invasive species are eradicated. Exotic animal removal programs can be expensive and controversial, so it is especially important to understand how well this management strategy protects and restores ecosystems.

In the 1990s, the National Park Service began to remove non-native herbivores from Santa Rosa Island, starting with the pigs, then moving on to cattle, and finally elk and deer. The process took time. Limited ranching and hunting continued under special use permit, but by the end of 2011, the remaining non-native herbivore population consisted of just 12 deer (those are gone now, too).

In 2010, as the non-native removal program was wrapping up, USGS scientists returned to Santa Rosa Island to repeat their 1994-1996 plant survey. Along with students and scientists from the Claremont Colleges, they looked for the same set of endemic and rare plants they sought 15 years prior. How had removal of exotic herbivores affected Santa Rosa’s plants?

The results were encouraging. In the first survey, they found less than a third of their target species in the island’s canyons. On the follow up survey, they found nearly twice as many rare and endemic plant species as in the 1990s. Nearly all the species they found had increased in abundance from the previous survey.

“When I first started working on Santa Rosa Island, and we did our first surveys, the canyons and creek bottoms were pretty much denuded,” says Dr. McEachern. “They were eroded down to cobble and mud and a lot of the streams were straight and narrow like a bowling alley and the water would just shoot down there and I thought, yeah, there's not much hope. But what we found and what has surprised me so much, is how much resiliency there really is in these island canyons.”

Some species had regrown so much that it made it hard for the scientists to move through the canyons! The island streams that had been straight and narrow began to develop a meandering pattern, trapping water and sediment. The meandering streams facilitated plant recovery but meant a lot more slogging through puddles for the researchers. The difficulty of moving through dense vegetation, combined with the need to record many more individual plants, slowed their pace so much that the researchers weren’t able to revisit every canyon that they’d included the first time. They were also able to use GPS to mark each plant location, something they hadn’t been able to do in the 90s.  This advancement in technology allowed them to be more precise and will help improve data quality for future studies.

“It's a joy to be working on that island right now, when it's in a stage of recovery rather than in a stage of demise.” - Dr. Kathryn McEachern

Signs of recovery weren’t limited to any particular group of plants—the species that showed the greatest increases in abundance included the Island bush monkeyflower, an endemic shrub with red-orange flowers, Giant coreopsis, a charismatic native shrub with huge yellow daisy-like flowers and tufty foliage, and San Diego needlegrass, a native perennial grass that grows in bunches.

Though many species are making a comeback, the 2010-2012 survey still largely shows an ecosystem early in its recovery. The researchers still couldn’t locate more than half of their target rare and endemic species that had once been found in Santa Rosa Island’s canyons. Nearly half of those that they did find remained uncommon even as they increased in abundance.

Still, the study shows that island plant communities can begin to recover quite rapidly following exotic herbivore removal, even without additional active restoration. In the years since the second survey was completed, USGS researchers have observed that native plants have continued to re-establish on Santa Rosa Island.

“It's a joy to be working on that island right now, when it's in a stage of recovery rather than in a stage of demise,” says Dr. McEachern.

Management programs like exotic herbivore removal can require significant investment of planning and funding, and the results from Santa Rosa Island study show that these large efforts can be effective. And even though Santa Rosa is a somewhat remote island, McEachern says that the island’s lessons are important for conservation and management in environments that feel far less isolated. Native habitats that are surrounded by urban areas or highway loops that can function as islands, making these places more similar to Santa Rosa than you might expect.

The Santa Rosa study also provides a sense of hope at a time of widespread habitat loss, extinction, and climate change.

“We don’t have any immediate solutions for some threats to islands, like climate change- but removing non-native animals is something we can do right now,” says Dr. Diane Thomson, a scientist at the Claremont Colleges and co-lead author of the new study. “It’s very encouraging that our study shows such strong and rapid benefits of this kind of management.” 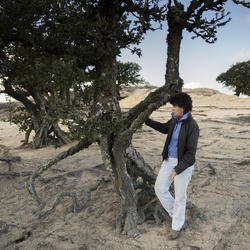 The Channel Islands were used as ranches for almost 150 years. Sheep, cattle, pigs and other livestock grazed on native perennial scrub, leaving behind barren landscapes that could not collect moisture from coastal fog. In time, ranching ended and livestock were removed. WERC’s Dr. Kathryn McEachern is monitoring habitat recovery and testing the efficacy of restoration practices on the islands for...
By
Western Ecological Research Center (WERC)
link
October 2, 2017

The Channel Islands were used as ranches for almost 150 years. Sheep, cattle, pigs and other livestock grazed on native perennial scrub, leaving behind barren landscapes that could not collect moisture from coastal fog. In time, ranching ended and livestock were removed. WERC’s Dr. Kathryn McEachern is monitoring habitat recovery and testing the efficacy of restoration practices on the islands for...
Learn More
link 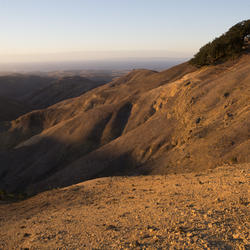 California’s Channel Islands are recovering from a long history of ranching. As the island ecosystems respond to the absence of livestock, WERC’s Dr. Kathryn McEachern is working with the National Park Service to test new monitoring programs that could help ecologists and biologists study recovering environments across the West.
By
Ecosystems, Status and Trends Program, Western Ecological Research Center (WERC)
link
March 10, 2017

California’s Channel Islands are recovering from a long history of ranching. As the island ecosystems respond to the absence of livestock, WERC’s Dr. Kathryn McEachern is working with the National Park Service to test new monitoring programs that could help ecologists and biologists study recovering environments across the West.
Learn More
link 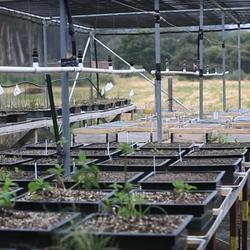 Ecosystems throughout the U.S. face threats from invasive species and rapid changes to the environment. Dr. Kathryn McEachern is studying the long-term effects of invasive plants and animals, and environmental change on the survival and recovery of rare plants across the 18 California Islands and in the Great Lakes.
By
Ecosystems, Invasive Species Program, Western Ecological Research Center (WERC)
link
March 9, 2017

Ecosystems throughout the U.S. face threats from invasive species and rapid changes to the environment. Dr. Kathryn McEachern is studying the long-term effects of invasive plants and animals, and environmental change on the survival and recovery of rare plants across the 18 California Islands and in the Great Lakes.
Learn More
October 6, 2021

Building a Cloud Forest From the Ground Up

California's Channel Islands were once home to cloud forests, but this unique ecosystem was lost. USGS & partners are bringing them back.