Highly pathogenic avian influenza (HPAI), commonly referred to as bird flu, is making its way across North America. In December 2014, the USGS detected three related HPAI H5 viruses in Washington state. To date, strains have been detected in wild birds in 14 states and commercial and backyard poultry in 15 states. Nine states have had outbreaks in both wild birds and poultry.

Influenza is a cunning virus, constantly evolving and mutating into different strains with varying risks to animal and human health. It travels with its bird or mammal host, sometimes over very long distances, sometimes even across oceans. Hitchhiking viruses from afar can mix with local strains to create novel types of flu, contributing to and further complicating the process of mutation.

Perplexed? You’re not alone. Unraveling the mysteries of HPAI is complex—baffling, even—but USGS wildlife disease investigators and their partners are taking on the challenge.

"Our avian flu surveillance is crucial for providing farmers and wildlife managers with early outbreak warnings to help protect valuable poultry, and for helping our partners best protect animal and human health," said Jonathan Sleeman, director of the USGS National Wildlife Health Center (NWHC) in Madison, Wisconsin, which was instrumental in the first detection of these HPAI viruses in the United States.

While the health risk posed to the general public by these HPAI outbreaks is low at this time, it is possible that human infections with these viruses may occur, according to the Centers for Disease Control and Prevention (CDC).

Avian flu viruses are classified by a combination of two groups of proteins: "H" proteins, of which there are 16 (H1 to H16), and "N" proteins, of which there are nine (N1 to N9). HPAI viruses in poultry are usually H5 or H7 subtypes. In 2014 and 2015, three different subtypes of HPAI were detected in the United States and Canada: H5N1, H5N2 and H5N8.

The challenge: H5 in North America

In mid-December 2014, USGS wildlife disease investigations led to the first two United States detections of HPAI, both in Whatcom County, Washington: H5N2 in a wild northern pintail duck and H5N8 in a captive gyrfalcon that caught and fed on an infected wild bird. Later in December, the USGS also detected an H5N1 strain in a green-winged teal in the same area in Washington. The USDA’s Animal and Plant Health Inspection Service (APHIS) confirmed these findings. The H5N1 strain detected in North America is different from the well-known Asian H5N1 HPAI virus that emerged in 1996 and caused many human deaths in Egypt, Indonesia, China and Vietnam.

"No human infections with H5 viruses from North America have occurred thus far," said Ip. "The public health risks posed by the HPAI outbreaks in the United States are considered low at this time."

However, these viruses are related to the Asian H5N1 strain that has infected people in other countries, according to the CDC. The potential for the current United States strains to evolve into forms that infect people is a significant concern if these viruses continue to circulate.

As the virus spreads, so does the response

In response to these initial United States detections of HPAI in wild birds, the USGS is working closely with the USDA-APHIS, which studies and regulates domestic poultry, and with state natural resource departments to increase mortality investigations and disease surveillance of birds. As wild bird disease experts, the USGS is uniquely positioned to contribute to national avian influenza surveillance and research efforts.

This heightened surveillance led to additional detections of HPAI in the United States, including H5N2 and H5N8 in Oregon in December 2014. The USGS was also involved in the first detection of HPAI in wild birds in Montana, Kansas, Minnesota and Wisconsin in 2015. In March 2015, the H5N2 virus was detected in commercial poultry flocks in Minnesota, then in Missouri and Arkansas. By June, the USDA confirmed HPAI in domestic poultry and wild birds in a total of 21 states, including states in the Pacific, Central and Mississippi Flyways.

"Each virus might carry different risks as they continue to circulate and evolve in North American wild birds," Ip said. "USGS epidemiologists and diagnosticians are ready to respond to these types of animal health emergencies."

With the start of the fall migration season, the USGS and its partners will maintain high vigilance to provide early warnings of HPAI in wild bird populations.

Like the CSI of wildlife diseases, the USGS is piecing together answers to vital avian flu questions such as:

Where did these similar-but-different HPAI strains come from and where are they going? The answers lay in influenza’s sneaky knack for mutation, and the USGS is armed with the scientific tools and capabilities to investigate these questions.

"Analyses of avian flu genomes suggest that viruses are crossing continents and even hemispheres through migrating birds, merging and mixing into novel strains along the way as the birds mingle at stopover sites," Ip said.

The USGS and USDA conducted a genetic analysis using RNA from the H5N1 virus that was found in the Washington green-winged teal. Their findings showed that the Washington H5N1 was a novel, mixed-origin virus containing genes from a recently discovered Eurasian H5N8 HPAI virus and genes from a North American low pathogenic avian influenza virus in wild birds. The USGS and partners published a full report tracking the spread of H5N8 from Asia and Europe since January 2014. 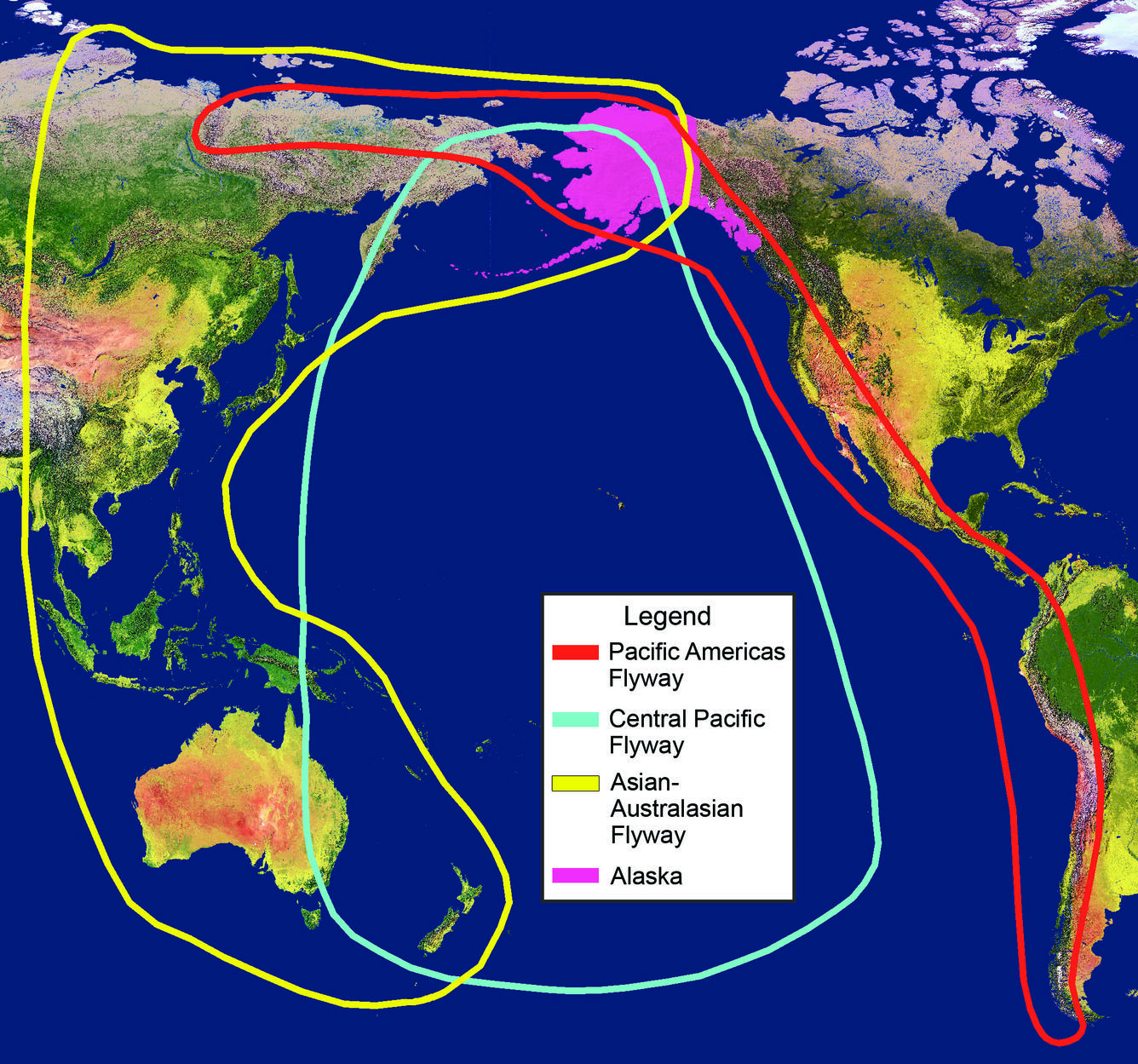 Scientists with the USGS and U.S. Fish andWildlife Service are harnessing current DNA technology to examine the role of migratory birds in the dispersal of avian influenza viruses between continents and the introduction of HPAI to North America. Using gene sequencing methods, the scientists recently found an H9N2 avian flu virus in an emperor goose and a northern pintail from Izembek National Wildlife Refuge in western Alaska – an important migration and wintering area for wild birds and potential point of entry for foreign animal diseases. These H9N2 viruses were nearly identical genetically to viruses found in wild bird samples from Lake Dongting, China, and Cheon-su Bay, South Korea.

From Alaska, avian flu can continue its southward journey through the Pacific Flyway, a major north-south route for migratory birds in America extending from Alaska to Patagonia. Every year, migratory birds travel some or all of this distance to move between breeding and non-breeding habitats.

Similarly, USGS scientists Jeffrey Hall and Robert Dusek at the NWHC found that avian influenza viruses isolated from wild birds in Newfoundland and Iceland represent viral lineages from both Europe and North America. Thus, migratory flyways on both North American coasts can act as corridors for the long-distance movement of avian flu.

A tireless task, worth the work

With HPAI in three of the four United States flyways, the likelihood that avian flu will continue to spread through North America is high. In response, USGS and USDA scientists will continue to monitor Eurasian H5 lineage viruses and provide stakeholders with timely information for early alert and management purposes.

For more information on the current avian influenza outbreak in North America, including hunter and farmer guidance, please visit the following websites: